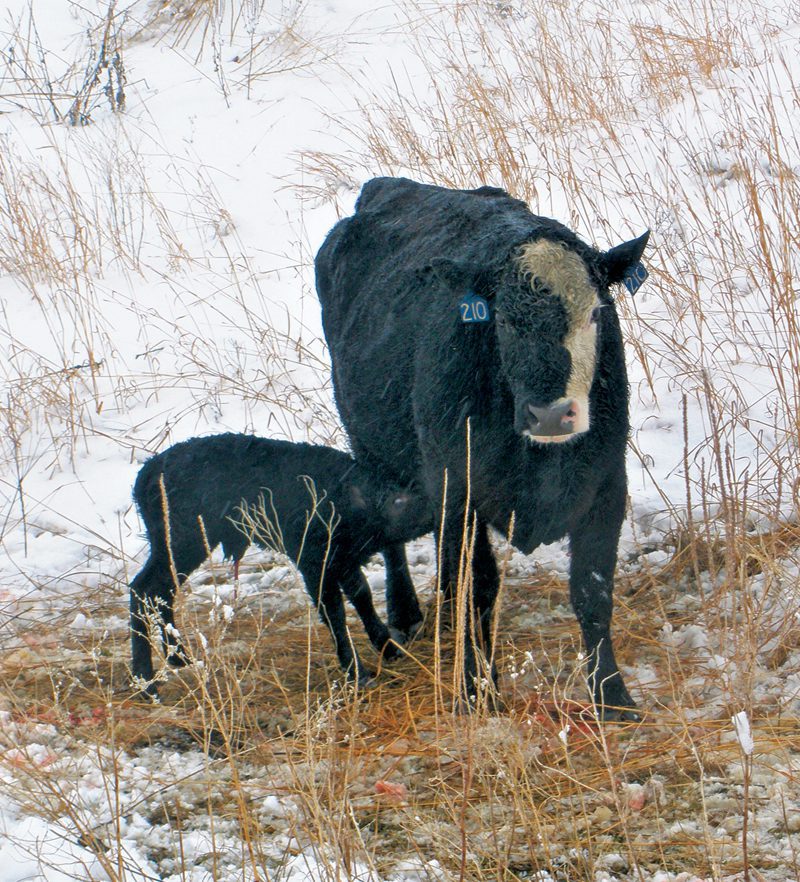 We have all seen hapless cattle of various ages with enlarged navels and painful, swollen joints. And, we know this problem arises from a condition typically called “navel ill.”

The unfortunately named problem, along with the seemingly hopeless prognosis, has prevented me from using this topic in a Chuteside column. It seemed simplistic and downright boring.

Recently, however, I have found information that sheds new light on the subject. Like most things, there is more to the disease than meets the untrained eye. Let’s call it by a more accurate name – septic arthritis.

It comes as no surprise to any cowman that septic arthritis rears its ugly head at birth. The many species of bacteria that can creep up a newly hatched navel cord love damp, dirty conditions. Those of us calving cows in February and March can run into plenty of wet weather. Inevitably, a muddy lot or dark, warm barn come into play at some point.

There seems no need to point out that pasture calving works best. Moving your pregnant cows out to a fresh paddock periodically is the best management practice for keeping the newest babies on clean ground. Leave the pairs behind, they are fine where they are. Nebraska Extension calls this the Sandhills Calving Method.

This is a great management tool, but it can pose a particular problem to farmer-cowmen with limited grazing, who calve primarily in lots.

Other common causes of septic arthritis are prolonged calving causing stress on newborns, inadequate intake of colostrum and ripped off navels. Roy Lewis wrote in a 2009 article for Alberta Farmer Express that a significant cause of navel infection for purebred breeders was the practice of weighing calves at birth. Most of these calves are weighed in a sling, which has maximum contact with the navel area. Slings should be cleaned between use or calves weighed when they are a day old and the umbilical cord has begun to dry. Lewis went on to say that he knew of several breeders who cut holes in their slings to minimize contact with umbilical cords.

Calves with cords ripped off close to the body need a prophylactic, long-acting antibiotic treatment right away. This problem occurs most frequently with calves pulled backwards. Every pulled or dystocia calf needs to be treated carefully; they are at risk.

The long-time recommendation of treating newborns with an iodine solution to clean the umbilical cord is now becoming controversial. “Navels are often over-handled by unclean hands, resulting in further contamination,” according to Lewis. “The disinfectant itself may become contaminated when ‘wells’ such as a cup or dip containers are used. Harsh disinfectants may greatly inflame the area, doing more harm than good.”

Calf pullers and straps need to be disinfected on a regular basis. Finally, cows need their annual vaccinations, mineral supplement and plenty of vitamins A and E to provide their calves with passive immunity.

Generally, the umbilical cord dries up within a week after calves are born, and there is no further risk of bacterial infection.

The initiative for this article was sparked when I read the Veterinary Column by Simon Peek, DVM, in the Oct. 25, 2020, issue of Hoard’s Dairyman Magazine. We can all sympathize with the special, intensive health management a dairy requires. It has come to light that the most difficult cases of septic arthritis are caused by mycoplasma bacteria. Just ask any beef cattle producer how taxing it is to contain. Having no cell wall, mycoplasma is especially hard to treat. Not only are joint infections common, but the respiratory system is often involved. In addition to causing pneumonia, ear infections become common, with calves taking on a distinctive head tilt.

Peek goes on to say that joints infected with mycoplasma are especially problematic to cure and the prognosis becomes poor as additional joints become inflamed. Interestingly, lower limb joints tend to respond better to medication than higher ones. For example, a pastern will respond to treatment better than a knee joint. When the bacteria invade a stifle or hip joint, the outlook becomes dim.

If this problem happens in confined dairy cattle, why not in dry-lotted beef calves? Mycoplasma bacteria are common in every environment, especially feedlot areas.

More frequently, septic arthritis is caused by a great stewpot of bacteria. They invade the calves via the end of the umbilical cord (now called the umbilicus), making their way insidiously up into the naval area, where the first signs show up as a swollen naval. Bull calves are more likely to be affected than heifers, as the male urinary tract is constantly damp.

Symptoms of infection occur at two to five days of age. Naval ill is still treatable at this point, although if drainage or surgical intervention is needed, be sure to consult your veterinarian; attempting to drain purulent materials from a swollen navel may result in the accidental laceration of a hernia.

From the navel, bacteria can move up to the umbilical arteries – the umbilical vein and the urachus. A June 23, 2020, article by Oklahoma State University (OSU) goes on to describe the anatomy: “These structures supply the fetus with oxygen and nutrient-rich blood from the placenta, and they remove urine waste in the neonatal calf. These structures regress to become remnants after birth.”

When bacteria track up the umbilical remnants, they cause infection in other parts of the body. An infection in the urachus may prohibit calves from emptying their bladder completely, increasing the risk of urinary tract infections.

An infection of the umbilicus can lead to the development of abscesses along that vein, which spread to the liver.

When bacteria enter the bloodstream, it is called sepsis and can travel to small blood vessels throughout the body. Eyes, lungs, bones, liver, joints and brain can become hopelessly damaged, as well as growth plates of the long bones.

Joints are particularly at risk because they contain synovial fluid, a perfect medium in which contaminants flourish. Attaching to synovial membranes, bacteria are especially difficult to treat. Antibiotics do not penetrate these areas well, and joint membranes become thick and rough, creating an ever-increasingly attractive habitat for the microbes. Cartilage is destroyed as well, prompting use of the name “arthritis.”

One article on joint infections suggested euthanizing many of these victims. Prompt treatment of suspect calves is, however, often successful. Often, the navel remains enlarged and scar tissue may be present, but some calves do survive and grow normally.

The best management system for navel Ill or septic arthritis is to keep your calving area and equipment as clean as possible. Wear gloves when pulling calves, bed with clean straw (not wood chips) when necessary, and treat suspect calves immediately, within 24 hours of birth.

Those of us fortunate enough to calve on grass should be thankful as well as diligent. The world is full of bacteria.