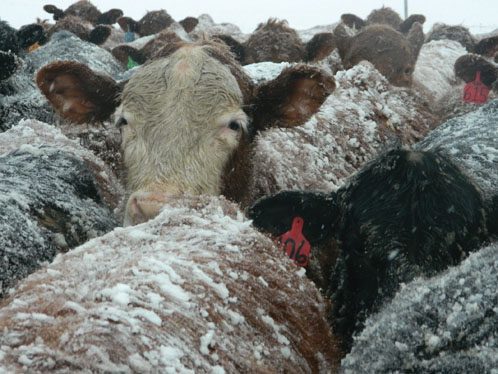 Over the past twenty or so years, we have seen some problems considered to be dairy dilemmas slowly creep into the beef cattle population. This is not due to neglect or carelessness on the part of the dairy folks. There continues, however, to be an inevitable spread of common health issues into beef cow herds and feedlots.

The first was Johne’s disease, M. paratuberculosis, which is a fatal wasting sickness. Easily carried by small wildlife such as rabbits, it is easy to understand the spread of this waxy-coated bacterium into beef cow herds.

More recently, another recurring dairy malady has made its way our direction, this time, to the feeding sector. It is digital dermatitis (DD), otherwise known as hairy heel wart.

Most commonly found in dairies, the daily confinement and constant contact with abrasive, wet concrete flooring contributes significantly to the likelihood of foot infections. Likewise, the persistent presence of manure associated with livestock concentration adds to the problem.

It’s easy to comprehend how hairy heel wart has jumped from dairies to beef cattle feedlots with the large number of dairy steers on feed and similar conditions on the ground.

Digital dermatitis was first described 34 years ago in Italy. It has spread literally around the world since then, reaching the United States in about 1995. Highly contagious, it primarily settled into dairy herds, who are most likely to live in close confinement situations. Worldwide, it is estimated to affect almost 100 percent of dairy herds and 20 percent of all dairy cattle. Time has proven it to be an emerging threat to beef cattle. Although beef cows can suffer the disease, it is most likely to be found in feedlots. Interestingly, among beef cow herds, bulls are more likely to be affected than females. This is likely because they cover more ground in a year’s time and carry far more weight than a cow.

Various university research projects conducted in packing houses shows that up to one-third of dairy cattle going to harvest have DD infection on at least one foot. (For some reason, the left hind foot is always used in research protocol). Four percent of beef cattle are found to be infected. Veterinarians report that hind feet are the most likely to be affected, about 85 percent of cases.

According to the Merck Veterinary Manual, incidence of DD is low in countries such as New Zealand and other places where dairy cattle are traditionally grazed in a pastoral setting.

There is little information about the specific loss to feedlots in terms of performance parameters. Depending on the research source, cows can drop milk production by as much as 50 percent, and lose valuable time re-breeding after calving, an average of 20 days.

The exact cause of DD is still a whirlwind of theories. There seem to be many guilty bacteria and viruses allegedly involved in the development of the painful lesions. One hard fact among researchers, however, is the presence of one specific bacterium from the spirochete family called Treponema. It is generally agreed to be the primary organism causing hairy heel wart. The problem is, there are 80 strains of Treponema that can affect cattle. Which one do you treat for?

The stewpot of various bacteria and viruses contributing to lameness makes effective treatment of DD difficult to pin down. Additionally, since no oral antibiotics have a DD claim, any use of feed-grade antibiotics is prohibited. Unfortunately, stressed cattle coming into feedlots with suppressed immune systems will have a greater likelihood of becoming infected.

Complicating matters further, there is a long incubation period for the disease. In a July 24, 2015, Progressive Cattlemen article, J.K. Shearer and P.J. Plummer reported that many feedlot owners and managers say cattle enter their lots free of clinical DD evidence. After about 120-150 days on feed, they break with symptoms. This is particularly frustrating since it occurs about the time cattle are ready to move on to harvest. It also causes speculation that cattle enter feedyards with lesions present but not yet causing lameness. Dairy steers become more advanced and chronic with DD than beef cattle. Beef cattle feedlots housing stock with naïve immune systems may have outbreaks that affect up to 50 percent of the pen.

Lesions are most likely to appear on the back of the foot, between the heels. They can vary in appearance and size both within a herd and in different parts of the world. The condition is so painful that cattle will walk on their toes, if they put weight on their foot at all. Swelling is not a common symptom. Sores appear as raw, red, oval ulcers. Many develop a granular, wart-like lesion surrounded by coarse, long hairs. Thus the moniker “hairy heel wart.” The lesions have a distinctive odor.

In the chronic state, there is a significant erosion of the hoof heel. Unfortunately, DD slips easily into the category of “chronic” for many cows. Although it can subside, it never completely leaves; the majority of lesions will reoccur.

Since this disease is considered a permanent resident of your farm, once it has established itself control is not a matter of elimination, but management. There is no effective vaccine against DD.

Blanket feeding antibiotics is illegal and most systemic antibiotics are off-label. What to do?

Dairy cattle are moved through a facility two or three times a day for milking and are generally docile. Feedlot cattle are not. In addition, they will suffer more significantly from stress by simply being handled. Therefore, treatment of dairy cows will vary significantly from feedlot cattle. While dairy personnel can catch a cow, scrub and administer antibiotic patches to lesions, pack the foot and apply a waterproof boot for protection, beef cattle producers are left pretty much with one option: footbaths.

Most severe cases of lameness may be treated fairly effectively with antibiotic sprays. This is still labor intensive. A footbath for cattle coming off trucks and baths at regular intervals in between placement and harvest is a more efficient option, no matter the inconvenience.

New Mexico State University gives suggested treatments to include in footbaths. The most effective are:

nð   Formalin (39% formaldehyde) – effective, biodegradable, non-corrosive. Must be replaced frequently in the footbath. Stings and may be toxic to employees. Be careful.

nð   Bleach – cheap and available. Requires long contact time and must be changed frequently in bath. Not as effective.

Lots should be scraped frequently and cattle provided with a dry place to lay. Bacteria love a wet yard.

Among the many challenges cattlemen face, this is yet another. Let’s hope that someday a new vaccine will appear on the market that reduces this risk and keeps our cattle on their feet.