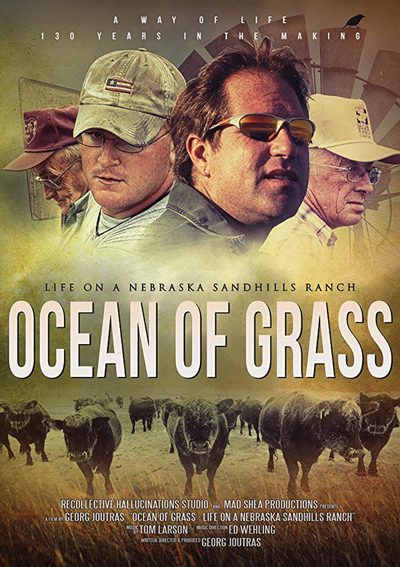 To hear Georg Joutras tell it, the project just kind of grew like Topsy, generating its own energy as time went on. The project – a film, Ocean of Grass, Life on a Nebraska Sandhills Ranch – has become a “go-to” across the state, with special showings drawing large crowds. A documentary, Ocean takes the viewer on a year’s journey in the isolated Nebraska prairie, following a fifth-generation ranch family and their neighbors as they deal with everyday life.

The film offers a real-life view of a staunch Nebraska family dealing with the trials, tribulations and joys of life, who are consumed with the care and feeding of their lifeblood, their livestock. From the retired horse spending the rest of his days in a comfortable pasture to the roping, processing and branding of the herd, the action is authentic and informative. A bird’s-eye view, often taken from a drone, shows the grasslands that seem to stretch to the Canadian border. Harvesting feed for the winter is as important as keeping track of every one of the Black Angus on the range. Meanwhile, in town, the local eight-man football team provides welcome Friday night entertainment.

Family members narrate the film, each telling his own story in his own way. That choice made the film exceptionally real.

A life of creativity

Born in New Jersey and raised in Ogallala, Neb., Joutras, came by his new film career naturally. His first life was spent developing software, taking advantage of changes in regulations in the broadcasting field. His company, headquartered out of Ogallala, started with four employees and had grown to 165 by the time he sold it in the late 1990s.

Moving on, he went with his lifelong passion for photography, publishing several books of photography including A Way of Life, a photo journal about the McGinn Ranch north of Broken Bow. He also owned a gallery in Lincoln for seven years where he made his original contact with the McGinn family.

A simple GoPro camera started him on his journey producing Ocean. The project involved upgrades of several cameras, ditching most of a year’s worth of film for new material and 22 months of post-production. A jack-of-all-trades, Joutras did it all, with the exception of the music.

The film premiered at the Kansas City Film Fest in April 2018. Screenings have played to sold-out audiences across the state, often with Joutras appearing for Q and A sessions afterward. It has also been shown at benefits for the recent Nebraska flood.

We in the industry are constantly working to tell “our” story to the public. Generations of Americans have no concept of where their food comes from or what actually happens in flyover land. Joutras has put a face, a real face, on a way of life that needs to be shown and respected.