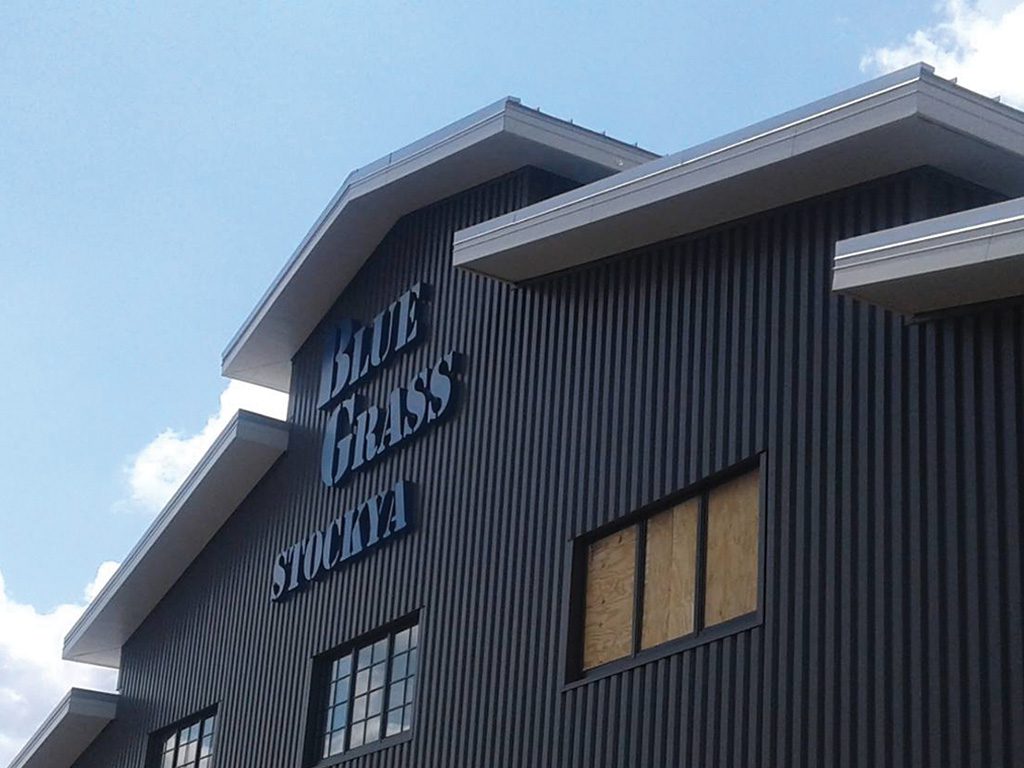 Jan. 30, 2016 is a date that few folks in Lexington, Ky., are likely to forget. Construction workers accidently started a fire at the downtown Blue Grass Stockyards. High winds fanned flames 30-70 feet high, consuming the seven-acre facility, crossing the street and destroying other businesses. The tree alarm blaze produced smoke that could be seen as far away as Louisville, witnesses used the term “terrifying.”

The old facility had stood since 1946, when a group of locals purchased a Swift buying station and converted it into a sale barn. Improvements were made in the mid ‘70s; by the 1980s the business was encircled by the growing city of Lexington. This situation is not unusual to many auction markets; traffic problems ensued while the barn thrived.

The company was celebrating its 70th year in business at the time of the fire.

Back to the present

Jim Akers is the chief operating officer for Blue Grass Stockyards. The company encompasses seven livestock markets and an Internet video sales service in Kentucky. It’s owned by nine shareholders, Gene Barber being the managing member. Akers praised Barber as being a positive and farsighted leader, creating a working culture that develops outstanding employees. Indeed, many of their staff work at multiple facilities, traveling from market to market full time.

The positive nature of Blue Grass’ leader team was front and center at the time of the disaster. Meeting across the street while the fire was still burning, the decision was made among the owners to rebuild as soon as possible. The old site was no longer adequate, and they realized it was time to break the emotional ties to downtown Lexington. Fayette County is their home and their heritage, so a search was put on to find an appropriate site near Lexington.

A tract of land became available across the highway from the Kentucky Horse Park. This is a very visible area, and the potential for complaints was high. There was no trouble generated by the Horse Park; however, nearby home owners posed many questions. Blue Grass representatives went directly to community homeowners groups, attending meetings and answering questions head-on. Akers said some of the most adamant opponents became their biggest allies, once all their concerns were addressed.

The immense nature of their plan required three contractors – one for the building, one for paving and a project coordinator for welding five acres of pens. Akers explained these undertakings needed to be spread out, and an architectural firm was hired to oversee the hiring of contractors.

Akers himself took on the responsibility of supervising the building of the pens. Local welders were employed to complete this herculean task. Time stipulations and expectations were defined and quantified to guarantee the facility would open on schedule. Akers stressed that he or the Blue Grass barn manager were there every day without fail. He praised Jeffery Nickell, a 37-year employee, for always providing a steady, dependable presence. Nickell’s father worked for Blue Grass Stockyards for 38 years prior to his son. Akers is proud of his dependable team.

The timeline to rebuilding was remarkably short; it took only 54 days from the time of the fire to the securing of a building permit. Ground was broken on Sept. 3, 2016. The facility’s grand opening was Sept. 11, 2017.

With five acres of pens under one roof and every square foot of parking space paved, there were major engineering hurdles to overcome, most notably with rainfall runoff. The new facility borders Cane Run Creek and sits alongside the Royal Springs Aquifer. Blue Grass owners needed a practical rain water drainage system, one that would also be demonstrational to their clients. There are three water management structures on site; two catch water off the parking lot. This water is purified through a biological sand bed filter system before being released into Cane Run Creek.

Rainwater from the immense roof area runs into a third pond and is used to water cattle at the new facility. Akers explained the latter pond also catches water runoff from adjoining pasture and groundwater is protected all ways from the market. He said they worked closely with the state’s Department of Water Quality and the University of Kentucky in addressing these drainage issues.

With cattle comes manure, and the University of Kentucky livestock staff aided in formulating an acceptable plan for waste management. Eight, 24-foot fans are used in the yards after each sale, and manure is hauled out dry. It’s put in a loading bay where a trucking company has been contracted to pick it up daily.

The facility was built solely for cattle sales, due to the pipe fencing. Hogs and sheep will be funneled to other Blue Grass Market sites. One-time capacity at the new location is 3,500-4,000 head. The human capacity has its own unique story. In order to honor their heritage and add to the comfortable hominess of the new facility, the auction ring and seats were constructed directly off the blueprints of the old sale barn. When folks walk in, it feels like they are back on their old stomping grounds. Seating accommodates 250 people.

The story doesn’t end here. The site includes a myriad of other entities that will contribute to the business and community. They include a 4,000-square-foot retail space for farrier supplies, a western-wear store, event space seating 300 with catering service included, a museum of local agricultural history, an educational center, restaurant, gift shop, meat market, commodity broker, hay and straw broker, auction and real estate office, cattle order buyers office, and an advertising firm.

What? A meat market sitting just outside of a cattle sale ring? Akers explained yes, it’s ok. The sale ring has its own air supply to keep dust out of the rest of the building. He went on to say that the meat market is actually adjacent to the sale ring and perfectly engineered for safety and cleanliness.

The average cow herd in Kentucky numbers 29. Blue Grass feeder calf consignments average six head, and the overall average draft paid out to consigners will have a head count of 1.6 to 1.8 head. They do sell load lots, particularly yearlings. Some clients run steers on grass numbering 4,000-6,000 head, while cow operations are far smaller.

Blue Grass Stockyards keeps in touch with national breed associations and other entities offering value-added programs for their clients. The firm likes to bring young, bright people on board who aren’t intimidated by new technology. It’s imperative for them to keep on the front end of all new advancements in marketing and customer education.

Regular sales at Lexington are Monday and Tuesday. Purebred sales are held on the weekends and stock cow sales are offered the fourth Wednesday of each month.

Akers stressed the importance of commitment to their clients. He and his staff want customers to be proud of their market. Service is of the utmost importance, as well as keeping a sharp eye out for new technology and opportunities.

In 2015, about 106,000 head of livestock were sold at the old sale barn, worth approximately $200 million. Altogether at its seven locations, the market sells about $600 million worth of cattle each year. Lexington Mayor Jim Grey said “It’s the biggest cattle market group east of the Mississippi River. Because of its sales volume, it effectively sets the cattle price structure for the entire eastern United States.”