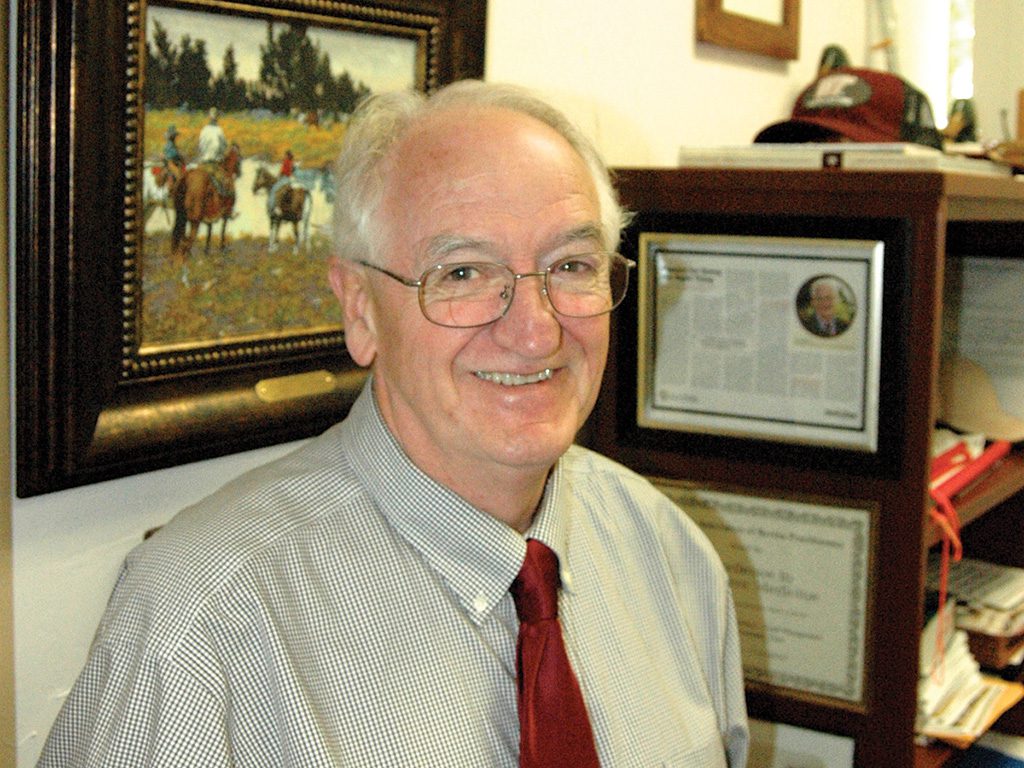 With wisdom garnered from the likes of Ladd Hitch, Bill Braum and Richard McDonald, Dee Griffin, DVM, was destined to become a long-time leader in feedyard animal health. He is among the newest members of the Cattle Feeders Hall of Fame. And with a gift for generating interest in the veterinary field among rural college students “who want to work at home,” he is helping West Texas A&M University double or triple its number of graduates being accepted into vet school.

Griffin has been one of the cattle-feeding industry’s most recognized vets. He has been honored by the Bovine Practitioners as one of the Top 20 Most Influential Veterinarians. Additionally, his role in helping found the Beef Quality Assurance program led to his being named BQA Educator of the year by NCBA.

WTAMU was lucky enough to recruit Griffin back to the Panhandle area from Nebraska, where he was a staple at the Great Plains Veterinary Educational Center in Clay Center for 25 years – and with no intent to leave. But when Texas A&M University requested his ideas for getting more rural Texas kids interested in becoming vets, he became intrigued enough to move south to the Amarillo-Canyon area.

Build it and they will come

Griffin was contacted in April 2016.

Griffin had worked with University of Nebraska vet students for years. He’d have them connect with vets, feedyards and ranches across the state, whether assisting with vaccinations and preg checks, or cleaning bunks and helping a processing crew.

“I told Texas A&M they needed students to have an ‘STP’ approach. Students needed to ‘see the people,’” Griffin says.

The College of Veterinary Medicine (CVM) leadership liked his ideas and suggested he head south to help run it. “They told me it would be like a second career,” Griffin says. “I guess they were right because we came here last July, along with Dr. Richard ‘Dan’ Posey. Between us, we focus on connecting TAMU with the cattle industry and the WT pre-vet program.

“Posey, a seasoned practitioner, had been part of the CVM in College Station for years and does amazing work with students. I had worked several years for Hitch Enterprises out of Guymon, Oklahoma, so my roots were somewhat here in the Panhandle as well. My wife, Joan, and I have a son who lives in Bushland outside of Amarillo.”

Griffin’s trek to WT brought him closer to Texas- and Oklahoma-area young people – kids from towns similar to where he was raised in southeastern Oklahoma.

Griffin’s early interest in animal care led him to Oklahoma State University and eventually the OSU vet school. “I wanted to be a horse vet because I didn’t think there would be much money in working with cows,” he says.

He changed his mind after seeing the Hitch feedyards in Guymon and Garden City, Kan.

“Dr. Don Williams, a great vet who later started Micro Beef, called and asked me to look at what he was doing in Guymon,” Griffin notes. “I made the trip. I had never seen 50,000 animals at one spot. A light went off in my head, ‘you can make a living working with cattle.’

“When I went back to vet school, I decided I wanted to go to work for a feedyard.”

One other detour was in the cards. After graduating from vet school, Griffin attended Purdue University where he got a master’s in ruminant nutrition and pathology.

He returned to Stillwater to serve on the OSU faculty.

While at OSU, Griffin was contacted about a vet job opening at Hitch Enterprises. “I headed back to Guymon and became close to the late Ladd Hitch and his family,” he says. “I was the vet for their three feedyards. Ladd treated everyone with respect. His integrity was apparent in how he ran the operations. He told me more than once, ‘Dr. Dee, if it ain’t right, make it right’.

“We all did our part for the betterment of the cattle. The attitude was, if you put stewardship first, the cattle and your family are going to be okay.”

Griffin recalls Mr. Hitch handing him a copy of a letter one day in the 1980s. “It was from the Food and Drug Administration,” he says. “The FDA had discovered residue from an antibiotic in one animal. Ladd asked me to figure out what it was, and to never let it happen again.

“From then on, we set a 60-day withdrawal period for any animal that entered the feedyard hospital, unless its records had been checked thoroughly.”

To help expedite testing for antibiotic residue, Griffin determined a good potential residue screening could be obtained by testing the urine instead of having to test the kidney. “The Feds did a two-year study on all three Hitch feedyards to determine if the urine testing was accurate,” Griffin says. “It was.”

Hitch’s dedication to animal care and health was one shared by the Texas Cattle Feeders Association, namely the late Richard McDonald. McDonald shared with Griffin a list of protocols that would enhance beef safety and quality. They included: proper animal care and handling; proper feeds and feeding techniques; proper medications used for treatment and disease control; proper vaccine and health treatment usage; and good record keeping and monitoring.

“It was basically ‘McDonald 101’, which he had on a 3×5 card. It led to the Beef Quality Assurance program,” Griffin says. “We took that information, and then expanded it thoroughly into the current 172-page manual.”

Griffin was also behind early efforts to alter injection sites in cattle. “The problem was being caused by giving injections in the rear of the animal,” Griffin says. “It was determined that medications could be just as beneficial to the animal if injections were made in the neck, avoiding making injections in key muscle areas.”

Teaching what he preaches

The importance of BQA, injection-site management and other animal care and treatment issues are stressed to Griffin’s vet students. He boasted of the benefits of BQA during his time in Nebraska. That enthusiasm has also been shared within the WT Department of Agricultural Sciences since its inception. Griffin is helping carry the BQA brand further in his WT role for CVM.

“Today, over 90 percent of all the beef in your grocery store comes from cattle that were managed by BQA standards,” he says.

Dr. Dee’s venture back to the Panhandle area came about the same time WT kicked off construction of its new $50 million Agricultural Sciences Complex. The state-of-the-art-facility and system of labs will provide students with the utmost in education and get-your-hands-dirty training.

Griffin sees the overall WT program as a way to recruit, and then keep regional students in the southern High Plains region after they receive their degrees.

When he accepted the WT position following his long tenure at then Great Plains Veterinary Educational Center, he began his mission of bringing more Panhandle-area students into the CVM. That mission included:

“Basically, if you want veterinarians to come back here to practice, they need to be from here,” Griffin says.

We know that not all of them will come back to the Panhandle – but many will.”