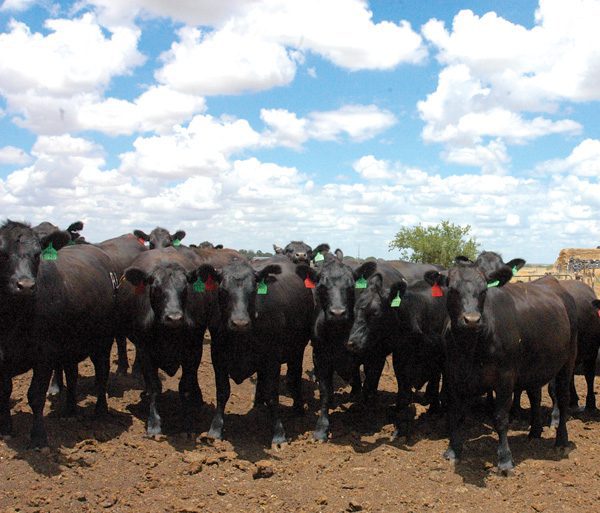 With nearly 60 years in the purebred Angus business, 90-year-old Texan Richmond Hales has seen the breed become a staple for many ranches across the Lone Star State. Son Rick combines his father’s old-style production and marketing techniques with new, hi-tech methods of measuring quality to help maintain and grow a customer base aimed at a good return on investment. Hales Angus Farm of Canyon, Texas, began in the 1960s a few years after Richmond and his wife, Mary Jo, handled Holstein breeding stock. They saw an opportunity to take a new cattle trail. And it has been all black cattle since then. Richmond and Mary Jo are still highly involved, along with Rick and his wife, Stephanie. Their sons, Chance and Cade, also play a part in the operation.

“We got into the Angus business when Mary Jo’s uncle in Lockney sold us a set of heifers in 1962,” Richmond says. “We then bought 30 to 40 heifers from a rancher in St. Mary, Missouri. We also picked up some good bulls and were among just a few Angus operations in Texas back then.”

That changed when Richmond started showing the family’s breeding stock. He had experience showing dairy cattle in his early years. Richmond’s family would load Holsteins on railroad boxcars, then ride with them from fair to fair, stock show to stock show. Years later when he entered the Angus business, trucks replaced trains.

Richmond became nearly as much of a fixture at regional fairs as the Midway tilt-a-whirl. While the breath-taking ride has provided years of thrills and excitement, Hales and his family have captured numerous blue ribbons for his purebred Angus bulls and heifers.

“We depended heavily on the show string,” Richmond says. “We showed at the Tri-State Fair in Amarillo, the South Plains Fair in Lubbock, the Texas State Fair in Dallas, and other fairs and stock shows. It was no time before we developed a world of business.”

The Hales were among earlier seedstock and commercial ranch operations to enter cattle in the Ranch to Rail feed-out program. The program was started in the 1980s by Texas A&M and New Mexico State universities. It was as an information feedback system that allowed producers to learn more about their calf crop and the factors that influenced value beyond the weaned-calf phase of beef production.

It created an opportunity for producers to determine how their calf crop fit the needs of the beef industry. It provided information needed to determine if changes in genetics and/or management factors were warranted.

Ranch to Rail also provided information about the need for a good animal health program. Ranches that didn’t use good genetics and/or animal practices often saw their cattle require heavy additional costs in medicine and nutrition. Richmond remembers how their operation benefited from the program.

“Our steers excelled and many times topped the feed-out,” Richmond says. “We knew from our records that calves out of our genetics performed well for our customers. Data from Ranch to Rail provided us with additional information. That’s when the use of carcass information really took off.”

The Hales were among the pioneers in using ultrasound to gauge carcass quality. “We started breeding for carcass data in the late ‘80s before carcass information really caught on,” Rick says. “We began ultrasounding our calves every year. That program helped us do a better job of breeding.”

Current data shows they continue to excel in their breeding program. “This past year, the Angus breed average for females for adjusted percent IMF (intramuscular fat or marbling) was 4.79,” Rick says. “Our heifers averaged over 7.

“Our spring yearling heifers averaged 7.27 IMF, which was 51 percent above the Angus breed average. Out of 100 heifers, we had four heifers with an IMF score above a 10. This was all done through the American Angus Association CUP program.

“This program has shown us where we need improvement and where we’re lacking. Now, they have genomic testing for all of this data, but we continue to use ultrasound as well.”

Rick notes that in the past four years, the family has relied more heavily on using more premier bulls. “We’ve really doubled up on using bulls with exceptional weaning and yearling scores as well as grid scores,” he says. “We have a predominately AI-bred herd and use AI sires that have at least six traits in the top 2 to 5 percent of bulls. By gathering genomic information and the carcass data, it gives us a good target to shoot at.”

At their March 2018 sale, the bulls with the exceptional numbers were the top sellers. “Before, you could sell a bull just based on its looks. It doesn’t work that way anymore,” Rick says. “They want the good-number bulls. You have to have quality numbers to go with the looks.”

Hales Farms is next door to West Texas A&M University, where research into beef cattle animal health is a key part of the agricultural sciences program. Richmond and Rick have always worked closely with WT and Texas A&M AgriLife Extension to benefit their purebred program, as well as beef production across the High Plains.

Rick says all bulls sold in the Hales’ annual March sale receive two rounds of Bovi-Shield Gold® 5 and Ultrabac® 7/Somubac®, plus two rounds of Spirovac® and Dectomax®. All bulls are fertility tested.

A typical Hales sale features about 100 bulls and 60 bred and open heifers. The sale is the third Saturday in March at their Canyon location. Bids are also accepted via the Superior Livestock Auction satellite and internet platforms.

“All cattle are videoed for the sale,” Rick explains. “Potential buyers can view the cattle over satellite TV or the internet. Visitors to the ranch can also view the cattle in pens. We don’t run cattle through the ring anymore.”

Most cattle are sold to ranches in Texas, Oklahoma, New Mexico, Kansas and Colorado. Some are sold to producers who retain ownership through the feedyard and sell cattle on the rail.

“These customers benefit from the carcass data they receive,” Richmond says.

Rick also runs a family wheat, forage sorghum and cotton farming program. It, like their cattle operation, has suffered from too much dry weather this year. Crop and cattle numbers will have to be adjusted if it persists. But the Hales have been in it for the long haul and won’t stop now.

For sure, Richmond Hales and his family have seen it all in the seedstock business. From riding the rails from fair to fair in a hot September and showing cattle in cold, poorly heated barns during a Panhandle blizzard, to marketing premium genetics over the Internet and satellite TV, they continue to evolve in purebred production and marketing.

They’re better off for it. So are their customers.