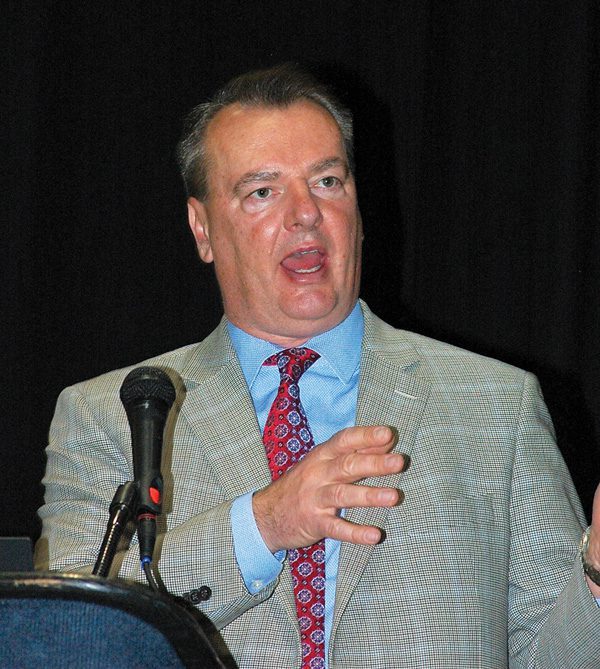 Frank Mitloehner is mad, sometimes fuming. If you spread manure about the beef industry’s carbon footprint, he’ll scoop up your mess with the facts. Blame greenhouse gases (GHG) on bovine, he’ll corral your Beyond Beef bias with the truth.

Mitloehner, a professor at the University of California at Davis, has become the anti-beef crowd’s nastiest nightmare. Twitter is his game and he has learned to master the social media means of communication. 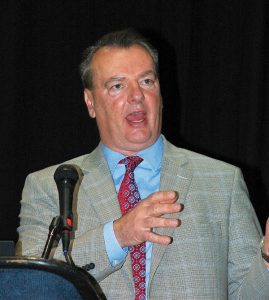 After only a year and a half on Twitter, his tweets manage to make 3 million impressions a month. And his message hits environmentalists and food activists where it hurts.

He keynoted the International Livestock Congress in March during the Houston Livestock Show and Rodeo, a few days before the entire event was shut down early due to coronavirus fears. The congress brought together producers, animal health professionals, government officials, domestic and foreign ag students and other allied industries.

Mitloehner rebuffed two allegations spouted by “our friends [anti-beef activists],” as he called them – false claims that land used for livestock growth should be planted in food for people, and one in which cattle emit huge amounts of GHG.

“I decided for myself that enough is enough,” he said. “A month ago The New Yorker [magazine] reported that eating 4 pounds of beef has the same GHG impact as a transatlantic flight.

“Does anybody here believe that? When you put out stuff that is not factual, I will throw my scientific weight into the arena and rebuff it.”

Mitloehner contended that climate change is occurring, as it always has. “Some question whether human activity is driving the changing climate. Most scientists say it does,” he said, adding that agriculture has been deeply affected, through drought in some areas and too much rain in others.

GHG, namely methane, CO2 and nitrous oxide, form a blanket over the Earth’s atmosphere to control global temperatures. CO2 has a lifespan of thousands of years. “But that’s not true for methane,” Mitloehner said, pointing out what animal activists raise a stink about. “It has a lifespan of 10 years. After 10 years, methane is destroyed. That is hugely important.”

In addition, GHG from livestock is different from fossil fuel use. Mitloehner said when livestock graze on grass, they remove forage’s cellulose, the most abundant biomass in the world. “What can digest cellulose – ruminants?” Mitloehner said.

The cellulose is produced by carbon from CO2; the ruminant eats the grass that contains cellulous.

“Some of that carbon becomes methane, which is either belched out or derived from the manure the animal produces,” he said. “That methane is in the atmosphere for 10 years, after which it is destroyed.

“So the cow recycles the existing carbon over and over in a cyclical manner. If you have a constant number of livestock on a ranch, dairy or feedlot, you are not adding new carbon to the atmosphere.

“We have just been able to get this narrative out there [published in scientific journals]. We are now getting traction. Maybe pretty soon our ‘special friends’ will know that and will change their narrative from GHG to something else.”

Overall, only 3.9 percent of GHG is produced by animal agriculture in the United States. Only 2 percent comes from beef cattle from direct emission, according to the EPA. For the entire life cycle it is 3.3 percent for beef emissions. Worldwide, GHG is 6 percent for beef. Globally, all livestock have a GHG contribution of 14.5 percent.

“Of all the countries in the world, we have the lowest carbon footprint for livestock production,” Mitloehner said. “We produce 18 percent of all of the world’s beef with only 8 percent of the cattle. If there is one place in the world where we should produce beef it is right here. We know how to do it in an efficient way.”

He warned that anti-beef activists won’t stop attacking livestock production when the message on methane is spread.

Alarmingly, close to 40 percent of all food is wasted. The highest amount comes from fruits and vegetables. That’s both in underdeveloped countries and developed countries. “That is not acceptable,” Mitloehner said.

To meet what is called the “2050 challenge” [when the population reaches 9 to 10 billion people, efficiency will be critical.] “We’re 7.6 billion now and will see 9.5 to 10 billion in 2050,” Mitloehner said. “We will have more people to feed but no more natural resources to do it. We have to become more efficient in how we produce food.”

He added that worldwide land used for agriculture is tiny and most of it is only suitable for grazing by ruminants. It cannot support crops, but can support cattle, which, again, upcycle the forage to produce high volumes of protein needed by consumers.

Unfortunately, too many consumers believe crop and livestock production should resemble that of the 1950s, when farms had just a few cows, pigs and chickens. However, larger more efficient production is needed to meet the demands of the growing population, Mitloehner explained.

He is fully dedicated in his mission, even though he teaches and conducts research at UC Davis, long considered one of the most left-leaning universities in the nation. Mitloehner laughed when he referred to it as the “People’s Republic of Davis.”

Nevertheless, he is persistent in educating others. He has taken steps to even hire journalists as well as researchers to get the facts out. He expects producers and feeders to do the same.

“It’s not just good enough to be good farmers, good food researchers,” he said. “If we don’t get the word out, it’s worth nothing. Science communicating is extremely important.”

For more on Mitloehner’s research, visit his UC Davis website at Clarity and Leadership for Environmental Awareness and Research Center, or CLEAR Center – https://clear.ucdavis.edu.