It Came Fast and It Changed Fast 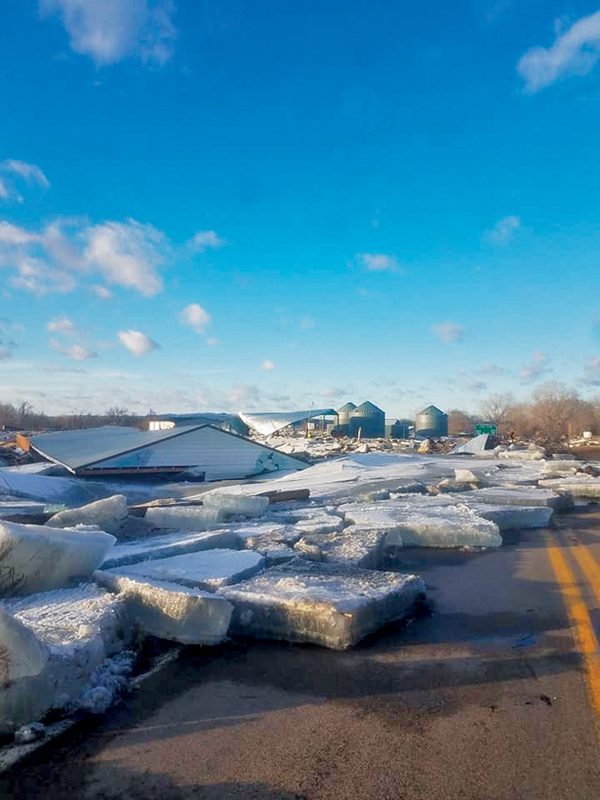 Bill and Kathy Rhea had front-row seats to the devastating bomb cyclone that hit the Midwest March 13-15, 2019.

Two feet of snow cover over much of Nebraska set the stage for disaster when warm temperatures, heavy rain and 75-mile-per-hour winds heaved themselves upon the Cornhusker state. Additional misery immediately followed with blizzard conditions and freezing temps in north, central and western parts.

The snowiest February in recorded Nebraska history kick started into record snowmelt on March 14 with 60-degree temperatures and torrential rain. A convergence of creeks and major rivers in eastern Nebraska began an enormous draining process, with water streaming in from South Dakota as well as central Nebraska. Ice floes the size of pickups tumbled down rivers, destroying everything in their paths. Several major Nebraska and South Dakota dams were breeched or completely destroyed by March 15.

Many people in Fremont have jobs and do business in nearby Omaha. Successfully facing most of the bad weather earlier in the week, folks finally found themselves beaten by Mother Nature on Friday noon, when roads leading into Nebraska’s largest town began to flood. Finding themselves trapped, few were able to find their way home to Fremont. By Friday evening, Fremont itself was surrounded by water.

The Rheas were also in Omaha. They, however, were aggressive enough and fortunate enough to have made it out of town by seeking alternates routes home. Being confined to his residence did not sit well with the senior Rhea; Bill describes the situation as being under “house arrest.” The only means in and out of Fremont for several days thereafter were by boat or helicopter.

You cannot keep a farmer confined. Sunday morning found Rhea, frustrated and determined, attempting to make it to the family feedlot near Arlington. Amazingly, he found a way out. The normal 15-minute commute stretched to three hours as the cattle feeder tracked through countless Washington, Cuming and Burt County roads, picking his way through infrastructure previously high and safe. One wonders if this commitment is attributed to a sterling character or just plain stubbornness. Either way, it was a successful and gutsy move in dangerous conditions.

The feedlot presented a picture that all of Nebraska faced – a sea of mud. Rhea was most disturbed, however, to find out that railroad tracks carrying badly needed feedstuffs had been washed out in several locations, so the cattleman set about pulling some strings to get feed laid in for his livestock.

It was nearly impossible to procure ethanol co-products, he says. Not only was all transportation shut down, but the ethanol plants themselves shuttered, a loss in processing of over 600,000 bushels of corn per day in one plant alone. Product manufacturing for feed used by Rhea Feedlot was disrupted for two full weeks. It is a problem that will continue to haunt cattle producers for an extended time as infrastructure is rebuilt.

In addition, the Rheas’ hay mill at Lyons lost 400 tons of hay, the plant flooded, and significant time and effort will be needed to clean up the damage.

Bill is thankful that it wasn’t any worse on his family than it turned out. The feedlot is drying and cattle will survive. Hog farmers and horse operations were hit worse, as well as cow-calf producers calving on river bottom areas, popular for their protective cover. Some adjoining towns endured a 100 percent mandatory evacuation. North Bend, for example, was ordered evacuated, then no one could get out because water had suddenly surrounded the town.

According to Kathy Rhea, her hometown went into survival mode. Starting on the north side of Fremont, dike breaches were sandbagged, predominantly by volunteers. She says she’ll never complain about teenagers again, or worry about our future. Teenagers helped save a good share of the town when they showed up in droves to fill sandbags and wield shovels. Citizens of all kinds, along with a remarkable city management team, worked tirelessly.

Another group pitching in enormous effort was those already homeless who had been forced into shelters or had taken up residence with friends or relatives. Instead of being victims, they became leaders in an effort to serve their community. Kathy says they are the main story in the flood event.

An estimated 10 percent of all schoolchildren in Fremont were rendered homeless in late March; 435 children were affected. At one time, more than 600 people resided at shelters set up by four churches and the United Way. Kathy says these facilities came together incredibly fast, thanks to the volunteer force within Fremont.

More than 1,000 meals per day were served in-house at the flood shelters. An additional 2,000 meals were delivered to flooded areas daily during the crisis.

In addition, clothing, cleaning supplies and other necessities were provided by generous donation to those in need. Children often left school in the evening with backpacks full of needed household supplies.

Within the city of Fremont, housing inspectors have determined that, with 1,000 homes impacted by the flood, 500 are uninhabitable and must be evaluated by government agencies to determine whether they can be salvaged. 350 may be entered but need work before habitation, and 150 are habitable but need major repairs.

Damage estimates for the state of Nebraska alone exceed $1.5 billion. More than 3,000 miles of road are damaged or destroyed statewide.

What is the good news?

To date, only four people have lost their lives due to the bomb cyclone in Nebraska and Iowa combined. It is tragic to those families affected, but ultimately a miracle that there were so few fatalities.