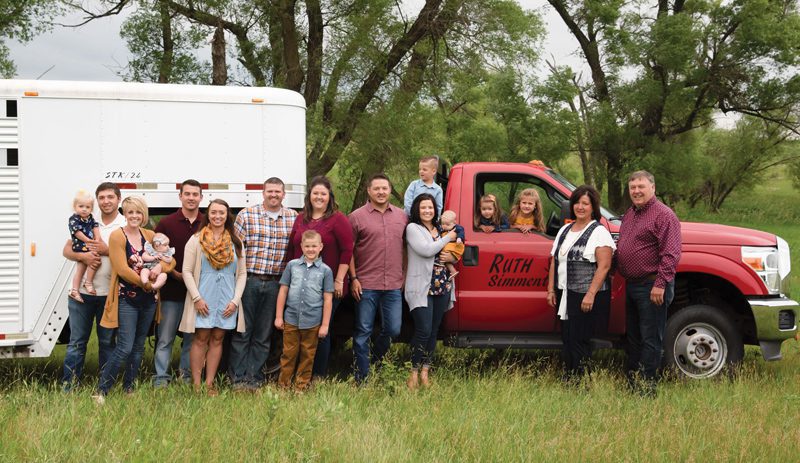 Jake Ruth has always been the cowboy in his family. “I always knew what I wanted to do. I was born into it, and didn’t know any different,” he says.

This is not an easy task in eastern Nebraska. Rising City is in a farming area where folks may be termed “flatlanders.” There is, however, opportunity for ambitious folks. East of Dwight, 20 miles away, are what the locals call the Bohemian Alps. It’s a grassy region of high, rolling hills where cattle thrive. It is this area that serves an important function for family cowboys like Jake Ruth. 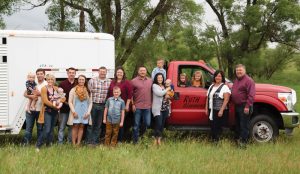 Ruth’s family is all in on the cattle. He emphasized that his parents, siblings and wife, Cassie, (nine in all) are due credit for pitching in to make things work. An enterprising lot, each one has a fulltime job off the farm and it takes them all to make the operation hum effectively. Ruth himself works for Heartland Builders Company, a firm that builds agricultural facilities for livestock.

The decision to pursue a sizeable cow herd came when Ruth was 18 years old. His parents, Russ and Barb, added 150 commercial cows to their 30 head at home and started breeding Simmental from the ground up. Ruth was in on the purchase, knowing what he wanted in life.

Today, the herd is 75 percent registered Simmental. The remaining 25 percent remain commercial and are used as recipients in the Ruths’ embryo transplant (ET) program.

The family is pleased with their breed choice. Its milking and mothering ability, durability and docility make it possible to manage the herd with a minimum of problems, which is important for people with off-farm jobs.

Grass is a short commodity in the heavily farmed area; creek bottoms and other undesirable areas are fenced off for small groups of cattle. Some might think of these pastures as badly shaped postage stamps. Fortunately for the Ruths, they have easy access to the aforementioned Alps to the east, where they were able to purchase a sizeable grazing area. This will house about half the herd in summer; rented grass will maintain the remainder.

Cows are split during calving season between Ruth’s place and his parents’ home, spreading out the stock over a larger area and the labor over more people. Ruth emphasized that the whole family is circling around to scrutinize heavy cows during calving, including his grandfather and uncle. Siblings and cousins can be seen driving slowly by –  they’re not snooping; they’re checking cattle.

Cornstalk residue is used as much as possible in the winter, and cows are run out until calving begins in January. Pairs may spend one day in the barn, and one day immediately outside before returning to the stalk field. They are fed a mixed ration utilizing a bale processor, or hay bales are rolled out as needed.

The family has hosted an annual production sale for 37 years. It’s unique in that five eastern Nebraska Simmental breeders co-op to put together 100 head of top-quality bulls and females. Calling themselves the Blue River Gang (the Little Blue River flows nearby), each outfit is relatively small, initially 30- to 50-head herds. The group holds an annual meeting over which Ruth presides to establish specifics. Catalog information, photography sessions, and feeding and fitting specifications are organized. Shouldering the load for other details, Ruth is in charge of proofing the performance numbers in the sale catalog.

Remarkably, the group is a simple partnership with no legal entity such as a corporation or LLC. There is respectful cooperation among members and no harmful incidents have happened in their extraordinary time period.

Ruth says communication is especially important in pulling the uniformity of body condition and fitting together from five breeders. The most important day of the year is when Derrick Vogt of Dannebrog comes out to take photographs for the sale catalog.

Ruth himself will clip about half the sale cattle but, he says, “Mom [Barb] can fit one better than I can. She is the go-to person in the clipping and fitting department.”

The majority of sale buyers are repeat customers who live in a 60-mile radius and own 30 to 40 cows. They may need only one bull every four years. Clients who live farther out may need as many as four or five bulls each year. Ruth says they pick up about five new buyers each sale.

The main goal is to “breed cattle good enough for our customers.” Held each year in early February, the sale’s additional four breeders in the Blue River gang are the families of John Mackovicka, Ulysses; Larry Mach, Weston; Trevor Naber, Utica; and Jake Stutzman, Beaver Crossing.

Val and Lori Eberspacher are sale management, traveling each year from Marshall, Minn.

The legacy of Mr. Confidence

A shining star of the operation, and one that advanced Ruth Simmentals greatly, was their bull Mr. Confidence. Ruth says he did tremendous things for the program, progressing their genetics. He contributed a large number of offspring and gave the Ruth family a ton of good publicity. Although 11 years old, the granddaddy bull still occupies the farm, reminding everyone of his wins: Supreme Champion Bull at the Nebraska State Fair, and Champion Simmental Bull at Kansas City and Denver.

Ruth Simmentals has been a faithful exhibitor at the Nebraska State Fair for years. Cognizant that their heifers always need to work as cows, they do not lean toward producing show stock. They instead aim their genetics toward the commercial cattleman. Nonetheless, the family still enjoys pulling a trailer-load of Simmentals to the fair. Thinking back on their special time hauling Mr. Confidence, Ruth says he would sure like to win Denver again someday.

Ruth did not hesitate in saying he would like his daughters, 2-year-old Charlie and 1-year-old Josie, to remain in the cattle industry. His kids will have a fighting chance, with both their parents in the barn. Ruth’s wife enjoys livestock and is a full partner in the business. Keeping a serious eye on the future, Ruth sits on the Nebraska Simmental Association Board of Directors.

He is most proud of his family and, second, is proud of the good people in the cattle industry.

The cattle industry can be proud of Jake Ruth.