After returning from World War II, Eugene never did finish that last semester of college. He and his dad went to Austin where his dad had plans.

“We’ll buy some land down there. That’s a real good place to put in a stockyard and a cattle auction,” his dad said. 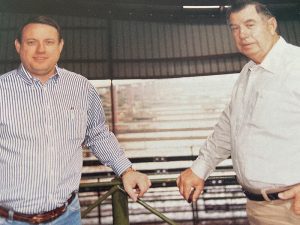 I was young and wanted business bad. So, while I was building that barn – it took about eight months to build – I just stayed in the country, lived in the barn and met everybody. Every day I’d meet all kinds of future cattle customers. People knew my daddy, in those days.

When we had the first sale there, we had so many cattle we didn’t know where to put them. My dad helped me. He said, ‘Don’t turn them back.’ We sold them all and got everybody satisfied that first day. A good sale in those days was at least 5,000 or 6,000 [head].

Eugene soon realized that cattlemen were going to town for feed, and the family soon built a feed mill. They bought product from the farms around the state institutions and prisons. Soon they were selling hog feed, chicken feed and range cubes for cows.

I sold out 20 years ago. Buying and selling cattle is what I do best. Soon after my dad and I finished the auction barn in Austin, we started having two sales a week and we built more cattle pens. We had to. I just kept building more and more pens. We were selling everything, not just cattle. We would sell hogs for maybe four hours in the morning and then maybe sheep or goats for two hours.

That’s how I got in the cattle trading business – with this auction sale. A lot of days we’d have probably 5,000 calves here, and I didn’t see any farmers who had a market for them. So, I started buying these calves, making contacts in Kansas, Nebraska, California and Arizona, and selling them. I’d buy the calves, get on the phone the next day and sell them to somebody. I mean, it’s worth something to someone. My customers had to have a market at the auction sale.

As his outside customer base grew, Eugene wasn’t getting enough cattle at his sales, so he started sending buyers to other areas to add to his inventory.

One of his favorite customers was Louie Dinklage from Wisner, Neb.

I used to sell Louie Dinklage a lot of cattle, but they had to be big. He always wanted cattle to weigh 900 pounds, and we didn’t have many that weighed 900 pounds in this country. He would call and ask, ‘How big are they?’ He liked good cattle and we had good cattle.

Fast forward to the late 1980s when Eugene and son, Jim, decided to move to a more rural setting, building a new facility outside of Schwertner, Texas, the tiny town north of Austin that was named for his grandfather. A state-of-the-art, two story building with a giant American flag and a lighted sign welcoming you is a good example of what “tending to business” for generations can produce.

In an article celebrating 60 years in business, Jim reminisced about his dad whom he lost in July 1998.

“We sat right here, right before he died and visited about the future. I told him that I was worried about carrying on the family legacy. He said, ‘No way. The company is yours and you can do what you want to with it.’ I really appreciated that.

“My father was my mentor, teacher and best friend,” Schwertner said. “The business didn’t scare him. After all, he had been in the Navy Seabees at Guadalcanal and Okinawa where he saw half of his buddies die. What could look so bad in the cattle business?

“We were and are working on the business model that my great grandfather set up, gathering livestock and selling them.”

This year, Capitol Land & Livestock celebrates its 75th year – with the fifth generation in tow – still gathering livestock and selling them in the tradition of Eugene … a Texas Trader.

PrevPreviousHappy Days Are Back for Beef Exporters – Too Bad It’s Not Canadian Exporters
NextBeef, the Best Is Yet to BeNext