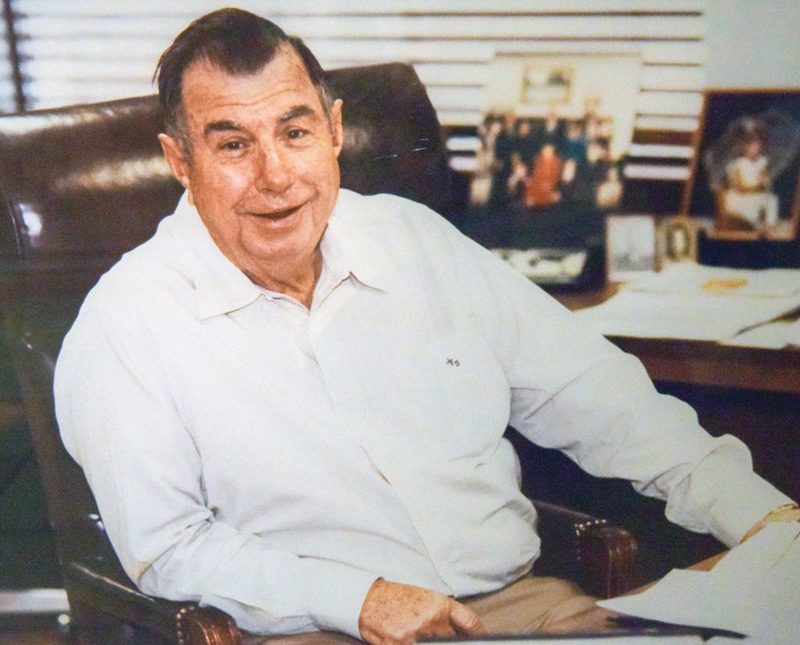 When I called Jim Schwertner about pictures for the Recollections column on his dad, Eugene, he laughed. “I told myself last night that I needed to call Betty Jo in the morning to tell her about us celebrating our 75th year in the business.” Because of COVID-19, the celebration will be comprised of a special article in the Texas Cattle Feeder’s Association Annual and memories of Eugene here in CALF News. 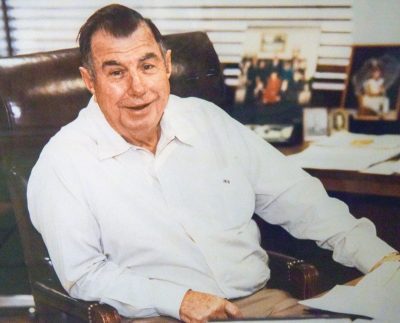 What memories I have of the gentle giant, Eugene, and the empire he and his family have built. I had worked with Jim and Capitol Land and Livestock for several years on public relations projects since visiting the company just outside of Schwertner, Texas. After featuring Capitol on the cover of CALF News, the company had a very good response from our readers, and the Schwertner team became strong supporters, but I had never met their leader, Eugene.

While traveling on a bus tour visiting feedyards in Canada, Bill Mies and I were visiting about my stories about the founders of the cattle business. Bill immediately asked if I knew Eugene Schwertner because he would make a great story for the magazine. When I got home I called Jim and told him that I would like to interview his dad.

A few minutes later, Jim called back and said he had mentioned the story to his dad, and he had headed for his office and slammed the door. I said, “Fine, not problem.”

A few minutes later, Jim called back again. He said that he had reminded his dad that the last time the company had been featured in CALF News, they had received some positive response. In other words, Eugene had changed his mind. “When can you come down?” Jim asked.

I flew to Houston that Friday, stayed overnight and caught a flight to Austin and drove my rental car to Schwertner. Jim met me at the bottom of the stairs. “I don’t think he is going to talk to you,” he said.

I laughed and said, “At least introduce us since I’m here.”

After an introduction and an explanation of how the interview would go, Eugene started visiting about Capitol and its history. We visited for five days, driving around the country, catching catfish in Eugene’s manmade lake and having dinner at the Petroleum Club in Austin. It was the beginning of a lifelong friendship with one of God’s creatures.

In the story printed in the January 1994 CALF News, Eugene told of his grandfather. The family came to Ohio from Germany around 1880 when the Kaiser was in power, and when he went out, they went back to Germany. Eugene’s grandfather, at the age of 12 or 14, didn’t want to go back so his parents gave him some money and left without him. He bought two horses and rode all the way to Texas where he had always wanted to go.

Eventually, he ended up on good prairie land with a good running stream and no Indians to steal his livestock. He started a farm and built several cotton gins. As other Germans came to the area, he gave them land and then started a little bank and a mercantile.

“When I was a kid, I used to go down there and you could buy anything – Florsheim shoes, Stetson hats, old plows, mule-cultivators, he sold it all … just covered the whole ball,” Eugene recalled.

“Everything was sold on credit. My grandfather paid the people he bought from once a year because the farmers paid once a year. When they got their cotton in, he’d gin it all. They’d bring in chickens and eggs, or milk a few cows and bring in cream and sell it. There wasn’t any money changing hands because we didn’t have any money. Nobody had much money then.”

NEXT ISSUE: GRANDPA AND ROOSEVELT.