Market analysts from CattleFax and Texas A&M University see fed-cattle prices pushing past $110/cwt. the third and fourth quarters of this year and push $120 in early 2019. But a lot of questions regarding demand, grain prices, troubled trade policy and overall cattle numbers will determine if there’s a chance for a small but welcomed profit after summertime losses. 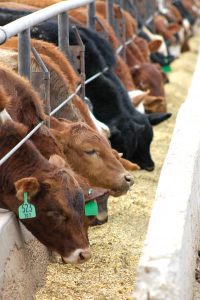 Lenz likes the results of strong demand. “We’re looking for the fed-cattle market to find some lows at near term (late summer),” Lenz says. “Moving through the balance of the year, we see fed prices in the $115 to $120 range into 2019 as demand picks up more into the fourth quarter. Demand needs to stay high in order for prices to stay or go higher. And demand is awfully good right now.”

Anderson sees third-quarter prices in the mid-$100 range. “We are producing a lot of beef as we approach Labor Day,” he says. “However, fed-cattle prices have been a little better than I expected, and I think that’s due to even better demand than I expected.

“Exports continue to boom, and I think domestic demand is pretty good, too. Packers have made a lot of money over the last few months, and that has fueled their demand for cattle. Even better, that has kept cattle moving and prevented a backing up of numbers in feedlots and increasing weights.”

As prices increase seasonally, Anderson sees fall prices in the low $110s. “I do think we have seen our peak price for the year, back in the spring,” he says. “Next year, I expect the first quarter to average about $120, decline into the upper $110s in the second quarter and average in the low $100s in the summer. Beef production should continue to grow, pressuring prices.”

What about feeder prices?

Feeder-cattle and calf prices strengthened in mid-summer as corn and soybean prices fell. Lenz points out that, seasonally, “prices find their highs in the summer,” as feeder cattle futures hovered in the $150/cwt. range in mid-July.

“We have to think as movement goes into the fall, prices lose ground into November. A lot of cattle are already off dry pastures. All in all, I look at softer trends moving into the fall.

Anderson contends that feeder-cattle prices will remain fairly strong the remainder of the year. “I have been surprised by the strength of feeder cattle prices this year,” he says. “They still seem high relative to fed-cattle prices. But, the demand from feedlots is there.

Lenz sees a little pressure on 550-lb. calf prices, which were trading in the $150-$160/cwt. range in Oklahoma City in mid-July. “I see the same trends as with feeders,” he says. “Prices appear that they will move lower as we go into the fall. But as we get into the calf runs, I don’t think prices will fall out of bed.”

Anderson projects Southern Plains calf prices in the $150s this fall. Prices should be helped by continued low grain prices that will likely see more pressure from large crops this fall. “First off, we will have more calves on the market as cow numbers expand,” he says. “But like with feeder cattle, I have been a little surprised at the strength in the calf market.

“For 2019, I have falling calf prices as supplies expand. I think we have seen lower prices in Texas, particularly out in smaller markets, as numbers nationwide expand.

“As numbers expand, I expect we’ll see more discounts for calves that aren’t viewed as perfect. With more supplies buyers can be choosier.”

Anderson says the futures market has provided “a good opportunity to hedge calves if you are interested in doing something. As of mid-July, the feeder contract was $150 for the fall. That implies cash calf prices something higher than that depending on your local basis.”

He notes that corn prices will likely remain under pressure with continued high grain stocks and expected high yields. “I expect cash prices to be relatively close to last year’s prices,” Anderson says. “Omaha prices were in the $3.00 to $3.20/bu. range through the last half of last year.”

Lenz also sees continued pressure on grain prices due to another large crop that’s projected, as well as lingering pressure from trade squabbles. With the potential for feed and cattle price volatility caused by potential trade problems, a good hedging strategy may be helpful in managing price. However, Lenz says the continued imbalance of futures prices and basis hampers risk management opportunities.

For example, in mid-July, the cash trade for finished cattle jumped by $5 to $7/cwt. However, the price move was not reflected in live cattle futures, which closed lower. Lenz says more “hedgers” are using futures and options spreads to manage risk. “It’s still not a true hedge,” he says, but a use of the tools available.

Anderson says that even with the basis-futures price difference, producers and feeders should cover their risk when there are opportunities. “I think folks ought to take advantage of the opportunity to grab a profit if they can on at least part of what they produce,” he says. “If you want to roll the dice on some, well, that’s great, but grab it while you can.”

USMEF says exports accounted for 13.6 percent of total beef production in May, up from 13 percent a year ago. Beef export value averaged $313.39 per head of fed slaughter in May, up 18 percent from a year ago. The January-May average was $317.69 per head, also up 18 percent.

“Strong export demand is a key for us,” Lenz says. “So far, tariffs are leaving us alone. That needs to continue.”

“There are a lot of reasons for uncertainty ­– tariffs, trade wars, weather, etc.,” Anderson adds, “but it seems like beef demand has been carrying us through.”

He says cutting into the strong export numbers “would hit prices just when we are expanding supplies. Trade problems should force our crop prices lower, but weather problems would likely make prices go up.”

CME Group’s chief economist Blu Putnam is worried that U.S. trade wars with China place American crop and livestock producers in the crosshairs. In his mid-July commentary, Putman said, “China can match us tariff for tariff, and U.S. agriculture is a top pick for China retaliation.”

He said major pressure on U.S. soybean prices could get worse, with large supplies from Brazil and Argentina eager to fill China orders for beans. Putman also believes the 4 percent growth in U.S. gross national product may actually slide to 2.5 percent as a result of trade uncertainty.

Again, pressure on U.S. grain prices would appear to benefit beef producers and feeders. But higher hay costs caused by the Southern Plains drought, along with bare pastures, will likely force more cows to be liquidated.

Whether that would put a dent in the some 31 million beef cows seen in the U.S. at the beginning of the year remains to be seen. “The main thing is to grab a good price while you can,” Anderson says. “These opportunities won’t last. We continue to increase beef production and that leads to lower prices. So, we just need to be prepared for that.”

Lenz points out that large hog numbers and tariff pressure on hog sales to China could hurt cattle prices. “There is a lot of uncertainty and a lot of unknowns,” he concludes, “and the market doesn’t like uncertainty.”