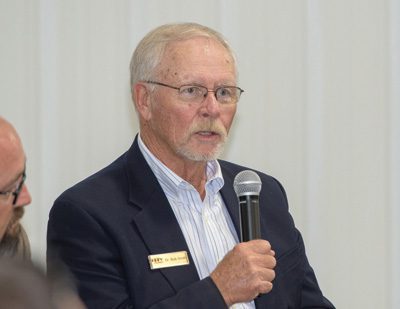 On June 21, there was one place to be if your focus was on the future of the cattle industry. The tiny community of Montezuma, Kan., is not exactly a common destination, but that day a host of VIPs graced the Hy-Plains Education & Research Center, along with cattlemen representing over 2.5 million head of livestock. The One Health Initiative seeks to provide “science-based solutions to reduce antibiotic use in food animal production.” 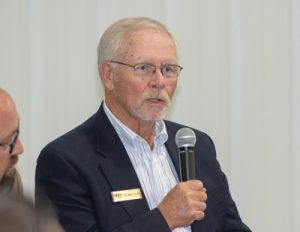 The daylong seminar featured speakers from the Center for Disease Control (CDC), professors from Kansas State University (KSU), prominent veterinarians, Kansas Department of Health and Environment representatives as well as a representative from Taco Bell, Mark Garner of Gardiner Angus Ranch and Tom Jones of Hy-Plains.

To establish a bench line, seminar speakers toured Circle Land and Cattle and Beefland Feed Yard the day before the event. After arriving at Hy-Plains, an array of beef industry leaders gave them an overview of the health, nutrition, record keeping and associations at work in the cattle community.

For many of the city folks, the tour and exposure to the basics of the industry were new information. “This is reality. I love to get out and see what really works,” said Dawn Sievert of the CDC. The difference between Atlanta, Ga., and Montezuma was apparent for Sievert during the drive from Wichita. She loved the wide-open spaces.

Also from the CDC, Dr. Megan Nichols, a native of New Mexico, was hoping she would have a chance to ride horseback before going home. “In Atlanta, they mostly ride English,” she said.

Producers from across the spectrum listened to experts working in the disease and animal health fields. By definition, One Health is the collaborative effort of multiple disciplines and sectors – working locally, nationally, regionally and globally – with the goal of achieving optimal health outcomes, recognizing the interconnection between people, animals, plants and our shared environment.

Mike Apley, DVM, Kansas State University faculty, set the stage by explaining how groups of drugs were developed and then used for human and animal health. “108 years ago, arsenic was used to kill the bacteria before they could kill you,” Apley said.

Since the 1930s and the development of sulfa drugs and others drug groups, progress was made in fighting bacterial infection. by 1985, Apley said, the word was out that we had won the battle against infectious disease.

Unfortunately, that wasn’t the case. Scientists had underestimated the nature of bacteria. The way Dr. Apley describes it, we are basically fighting an ongoing war. Man comes up with a new group of antibiotics (the last one was in 1978) and bacteria find a way around it. Apley’s not sure there will be ever new groups of drugs developed. However, if there are, they will be used for human health, not animal health.

“Is the sky falling? Not today,” Dr. Apley said. But he was realistic about the need for forward thinking about other solutions to health problems in livestock.

Dr. Apley believes we need to move toward stewardship with systematic thinking. When treating an animal, the steps need to be: 1) responsibility for diagnosis; 2) consider other alternatives; 3) select the antibiotic,  assuming the use is safe and effective; and 4) ask is it still necessary?

“The veterinarian should be in control, “Apley said. “OTC [over the counter] is out!” With the limited new tools available, Apley made it clear that we need to police ourselves and be sure we are making the best decisions to protect our animals and our future as well as looking for alternative solutions to animal health problems. In spite of the progression from animal husbandry to animal science at universities, husbandry must become the order of the day.

Word from the CDC

Two representatives from the Center for Disease Control represented human and animal health concerns. Dawn M. Sievert, Ph.D., M.S., serves as CDC associate director of antimicrobial resistance. Her job is to investigate focal points in human resistance outbreaks, looking for where, how and what the solutions are for the outbreak. Discussing the possibility of infections coming from being in health care, one must consider: if changes are to be recommended, does the fix cause other problems? According to Sievert, the over-prescription rate on drugs runs 30 percent. That means 47 million prescriptions are unnecessary.

Megan Nichols, DVM, MPH, DACVPM, serves as the enteric zoonoses activity lead at the CDC where she works on multistate outbreaks of Salmonella and E. coli resulting from exposure to animals and pet products. Using the latest fad of backyard chickens as an example, she noted that kissing your chickens is one way to get Salmonella.

During a quick-answer session, Dr. Nichols pointed out that regulations come from a variety of agencies such as FDA, USDA, various state organizations and, in the case of petting zoos, no one. “It’s the wild, wild west out there,” Nichols said.

Her real job is to head up a team of detectives, seeking clues for outbreaks such as the recent lettuce and cut fruit cases. The question becomes, what can be done when they find it, and will they have the right drugs available when they do?

On the retail side, Jessica Rosen, manager of sustainability and purpose for Taco Bell (named for its founder, Glen Bell), represents 6,850 outlets in 28 countries with 350 franchises and 42 million customers. They use 400 million pounds of ground beef and steak per year. Rosen sited the industry’s beef quality assurance guidelines as a quality standard.

Mark Gardiner, President of Gardiner Angus Ranch, spoke for producers. “Every animal is connected to a human,” Gardiner said. “Our business is all about people.”

He noted that there are 750,000 producers in the cow-calf, stocker and feedyard industries today. The average age of ranchers is 58; 80 percent of the ranches are family owned; and the average herd is 40 head. “I’m really bullish on beef,” Gardiner said.

In our war with bacteria, common sense and the consideration of other ways to do what we are doing have to be on our minds. The final word for the day is judicial – judicial use of drugs in humans and animals, and a careful analysis of the why, where and for what reason.