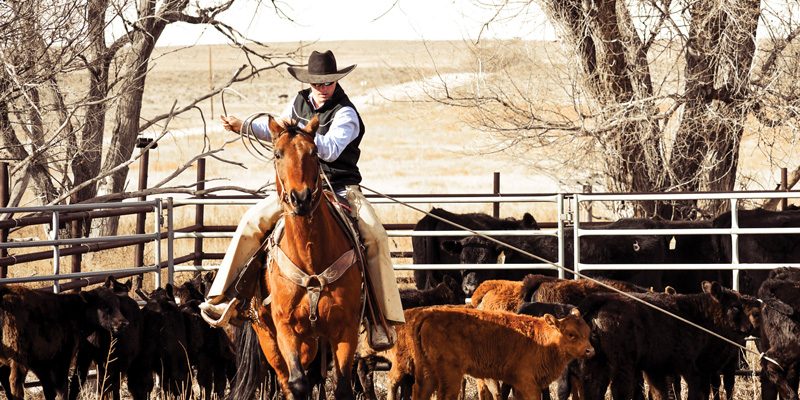 This is the second in a two-part series about the writer’s enthusiastic foray into ranch life on the Withers Ranch, Limon, Colo.

As the sun came up, our duties of the day shifted. Despite the limited sleep throughout the night, I wasn’t tired; I was inspired. In the morning light, it was time for branding. Once again, my host family was gracious and patient with my novice questions and skillset. We loaded up and headed down to find the participants of the day. Rancher Doug Ottewill’s family, Daryl and Chance Waite, who live on and manage the ranch, and several neighbors and friends in the area had all gathered to brand, immunize and castrate, all in an orderly, natural fashion. 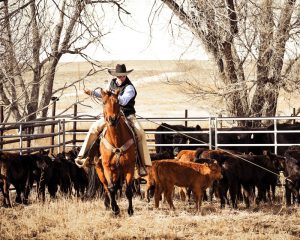 Women and men alike had their duties. There was no hierarchy or bias; everyone played their part. A young woman on a horse lassoed while her male counterpart got the calf into position in a careful, precise order of events. Two branding irons, hot off the fire – a reverse Z followed by a D – representing the family brand, were carefully positioned and placed just right. Two injections were given to ensure the health and wellness of the herd, followed by a chalk mark signifying completion and the placement of a tag, yet another identifier for the operation to keep track of their precious assets.

I sat on the fence, curious and impressed, but still too nervous to participate in full. I was an eager spectator, respectful of the process and impressed by this illustration of teamwork. If someone missed a mark, a cow got loose, or something didn’t go exactly as planned, the group seamlessly worked together to fix it. They supported each other, backed each other up and had fun doing it.

The community of it all

By lunchtime, an immense amount of work had already been accomplished for the day. Now it was time to relax and continue my education. Over a delicious crock pot meal and a few cold Coors Lights, we chatted, while still checking on the herd. Perfectly timed, a heifer went into labor. I was guided to the barn and stood back, watching through a crack between the door and the wall, careful not to interrupt nature’s process.

It was apparent that the mother wasn’t fully aware of what was happening to her, but she did what her body needed to. After several minutes, the nose of her baby appeared, then the body, and finally the hind legs. Initially, the mother seemed confused, jumping up and turning to look at this thing that had just come out of her. It appeared the calf was equally as confused as it looked up to find its mother standing over it. Yet within seconds, nature took its course and the mother began cleaning her baby, protecting it and ensuring it was safe. In a matter of minutes, the calf was on its feet, albeit unsteadily, but up and moving. Within the hour, the two were walking together as though they had been together forever, leaving me awestruck.

Exhilarated, I returned to the group and sat down to discuss all that I had learned and still wanted to know. I sat with ranch manager, Daryl Waite, and his wife Tina and discussed his path into ranching. Another multi-generational rancher, he had learned the trade from his family, and was passing it along to his son and grandchildren. He works side by side with his son Chance, who runs the Withers Ranch with him. He talked about the different places he had worked throughout his career, both in Wyoming and Colorado. He discussed the ebbs and flows of the business, and his more traditional approach to ranching. It is in his blood and it is his lifestyle and his business.

We discussed the ever-changing regulations and processes in the beef industry, and climate change and the effects that raising cattle has on the environment. And while Daryl is nothing like the stereotypical “environmentalist” he probably understands and cares for the environment as much or more than most. We talked about the strict food safety regulations and that beef in America is as safe as it has ever been. We talked about the farm-to-table phenomenon and how it affects family ranchers.

Following my “lunch and learn” experience, I sat in the circle with the rest of the group. These were neighbors and friends, all who had come to help one another brand the calves and spend a beautiful January day together. We talked about what boots were the best, passed around spurs and discussed who had made them, how much they weighed and how they were designed. I intently watched as they had a roping competition, much like a game of HORSE on a basketball court. They never judged me, they welcomed me fiercely, and in some cases, were equally as fascinated by my life as I was by theirs.

The temperature dropped, the sun began to set, and my adventure was coming to an end. We wrapped up our duties and headed back to the house to pack up and head to town. I reluctantly said my thank yous and goodbyes, got in the truck and wrapped up the day knowing that this would not be the last time I would do something like this, but rather the first of many to come.

This day was a true illustration of the intrinsic values that Doug had shared with me. “Of all the things I love in the world, and value in the world, this is priceless,” he said. “Yes, it’s a business, but the value of this ranch, to me, can’t really be measured in dollars. If you take care of the land, the land will take care of you.”

One thing that I have taken away from this is that beef is more than a business, it is a lifestyle. My time at Withers Ranch proved that sentiment to be true. The people were genuine, welcoming and hardworking, and the work was rewarding and interesting. There was no doubt that the philosophy Doug applies to his business – “land, then cattle, then profit” – is a model for success.

As I took one last look from the front porch of my cozy accommodations, I reflected on the weekend. I thought about my new appreciation for my delicious meals and family gatherings. I looked out across the plains and admired a marvelous, orange and gray, wide-open sunset. It was the perfect punctuation on my experience.