The Giles Family and the Kansas Wildfire 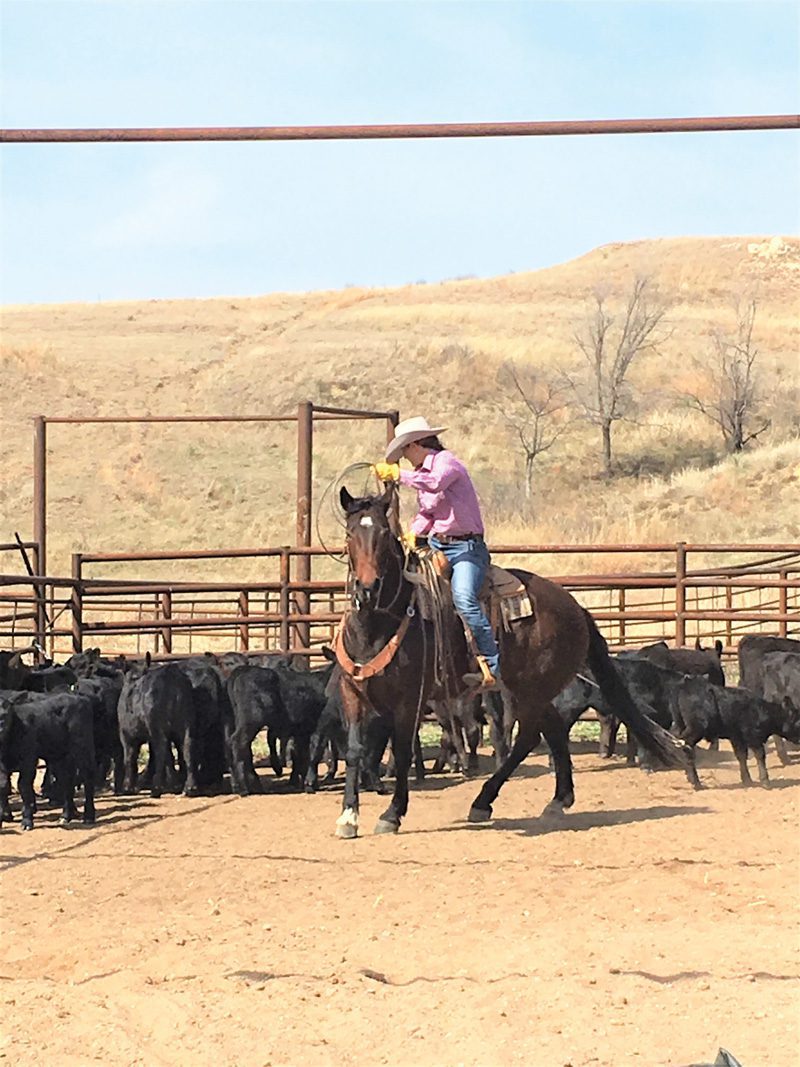 March 6, 2017, came down on the southern grass area of Kansas, Oklahoma and Texas, a monster unleashed. The events of that day affected many in the most horrific way; this is an account of one family. A huge thanks to Molly Giles Beckford for her patient help.

To draw a better picture, we need to explain the Giles family and their Clark County, Kan., ranch. It has been home to three generations of pioneer Norman Lee and Dolores Giles’ descendants. The original Giles came to the Ashland area in the 1870s. 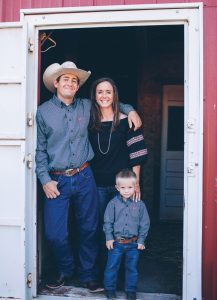 The ranch is located along Bluff Creek, where medium grass and short grass regions converge. Cropland grows wheat, alfalfa, sorghum hay and native grass hay. Some wheat and alfalfa is irrigated. Cows run on large native and improved pastures. They retain steer calves, feeding and marketing them through U.S. Premium Beef. A handpicked selection of steers are used for their retail beef business, Giles Ranch Beef®. In addition to their home-raised calves, they purchase stockers to run on wheat pasture and grass when adequate moisture allows.

C.J. and Molly Beckford are in charge of day-to-day operations on the Giles Ranch. Molly works mostly with the cattle, while C.J. handles farming and maintenance. Their son, Giles, was one year old at the time of the fire; the trio are often found working together. It’s an aspect of their life that Molly loves.

How the fire began

Early March is the middle of calving season at Giles Ranch. Molly Beckford says the day started out like any other – checking heifers. She describes the weather as warm and nice, but an ominous wind picked up around noon.

It was a Monday, the day when the Giles crew always eats lunch together and lines out a plan for the week. She depicted the meeting at the ranch office, where extended family was alarmed to hear of a fire that had broken out in Oklahoma. It was getting out of hand. Plans were immediately made to haul water south and help out in any way they could. Beckford’s mother and several of Molly’s nieces went into sandwich-making mode, packing badly needed lunches for exhausted firefighters. With a water truck loaded, C.J. was ready to head south. At that time they discovered that an independent fire had popped up west of the Giles Ranch.

The first decision at that critical point was to stay put. C.J. remained home and the family devised a plan to move their cattle to safer areas. They combined yearlings together on one wheat pasture and moved cow-calf pairs onto those same fields. Beckford describes the ensuing hours as chaotic – the ranch is large and the pairs were scattered. All the family members were on board, gathering cattle from several pastures, cutting fences, attempting to catch horses.

“To be honest, for most of this time I was thinking there is no way a fire could take out the entire ranch,” she recalls. “We are mixing all of these cattle up and going to have such a mess tomorrow!”

Beckford says moving the pairs was the slowest and most difficult endeavor. “If you know anything about baby calves, you know they don’t want to move very far or very fast,” she says. At this point, she began to pray.

The family kept at it until the wind shifted. “I still remember the exact spot I was at, the cows I was trying to move … my heifer pairs I had spent so many hours taking care of all winter, when my dad called and said we gotta get out of here. Go to the highway right now,” Beckford recalls.

“In a matter of seconds, the sky turned from blue to black as ash surrounded us. On my way to the highway, my husband called and told me he wasn’t going to make it off the ranch and that he loved me. Looking back at that call now, I know what it was for, but at the time I was still so naïve to what was happening all around me. I made it to the highway with my dad and one sister behind me.”

Beckford’s mother had all the four young grandchildren in her vehicle, picking up a son-in-law along the way. He had hit a cow and wrecked his pickup attempting to get off the ranch. They made it out. That left Molly Beckford’s husband, C.J., one sister and an intern in the inferno. C.J. and the intern rode out the fire in a metal hay shed.

Her sister survived the firestorm by moving to a wheat field. The things she experienced on that field, according to Beckford, are things we never want to. She was eventually found by an aunt and uncle who drove 50 miles to help the trapped family. “They came in behind the fire and got her out. Then they all came to help my husband put out the fire that was trying to burn the hay shed down.”

Beckford describes the emotional roller coaster of the day; adrenaline kept the family going. There wasn’t much time to stop and think about the “what ifs” until it was over. She explains the “fear of the unknown,” but not being able to comprehend that part until they had had some time to settle down. The young mother remembers wanting to get back to her son, and wanting to go home, even though there was no home to go back to. C.J. had watched their house burn down. There’s a new appreciation for cell phones since, even during the worst of it, Beckford knew her husband was ok.

Beckford’s two ranching sisters also lost their homes. The ranch office, horse barn, hay shed and mechanic shop also succumbed to the fire. An additional vacant ranch house and other buildings burned, along with more than 100 miles of fence.

The family’s worst loss was considered to be half their cow herd, four good horses, a donkey and the family dog. Beckford said they spent days putting down animals that couldn’t make it and weeks re-evaluating the health of those that were left.

Family and friends flooded in to help. One neighbor lady is credited with saving the Beckford’s parents’ home from latent, burning embers. The same family provided housing until alternative homes became available for the three sisters.

“The outpouring of generosity that we were able to witness over the next months was truly breathtaking,” she says. “People from all over the United States sent aid to our community in the form of supplies, helping hands and monetary donations. Being part of the agriculture community is truly a gift.”

Beckford says at the time there was no time to cope with anything, they still had cattle to care for. They had many people willing to help, but those people needed direction. Tasks were divided and conquered with long hours of labor. Beckford’s sister Jenny took on the paperwork of documenting and burying dead animals and orchestrating volunteers. Her other sister, Katie, headed up donations. She made sure that generous gifts of hay made it around the entire neighborhood so all cattle in the community were fed. Beckford took charge of the cattle that survived, working closely with veterinarians and cowboy volunteers.

“I don’t think we relaxed for a year,” she says. “If we even know how to relax anymore. There was a lot of searching for a new normal and it took a while, but it happened.”

She credits her mom with great help in child care for all the sisters’ children.

It took two years for the three sisters to rebuild their family homes. They were all settled back in about April first of this year. There have been no ill effects on the family, physically, although Beckford says it may have taken a few years off their lives. They’ve all made an effort as a family to focus on the good and leaned on one another when they needed to. Through all the sadness, they strove to be happy and are mostly thankful.

“We serve an awesome God that protected all of us, and that in itself is enough to make me happy,” she says. Beckford is not sure this event is something they will ever recover from; it is part of them now.

Is there any good that can come out of a disaster like this? “You might not be able to find it every second of every day, but there is good in everything,” Beckford explains. “If you can’t find it, then you’re not looking hard enough. Keep your faith. Don’t give up because you’ve been dealt a bad hand. Think of the people around you, your kids especially. What kind of example do you want to set for them? Do you want them to give up or to fight through adversity?”

There are a lot of people who love to dish out advice, but do not have much ground to stand on. You can bet this family has experienced the worst that life can throw them. We should listen carefully when they speak.