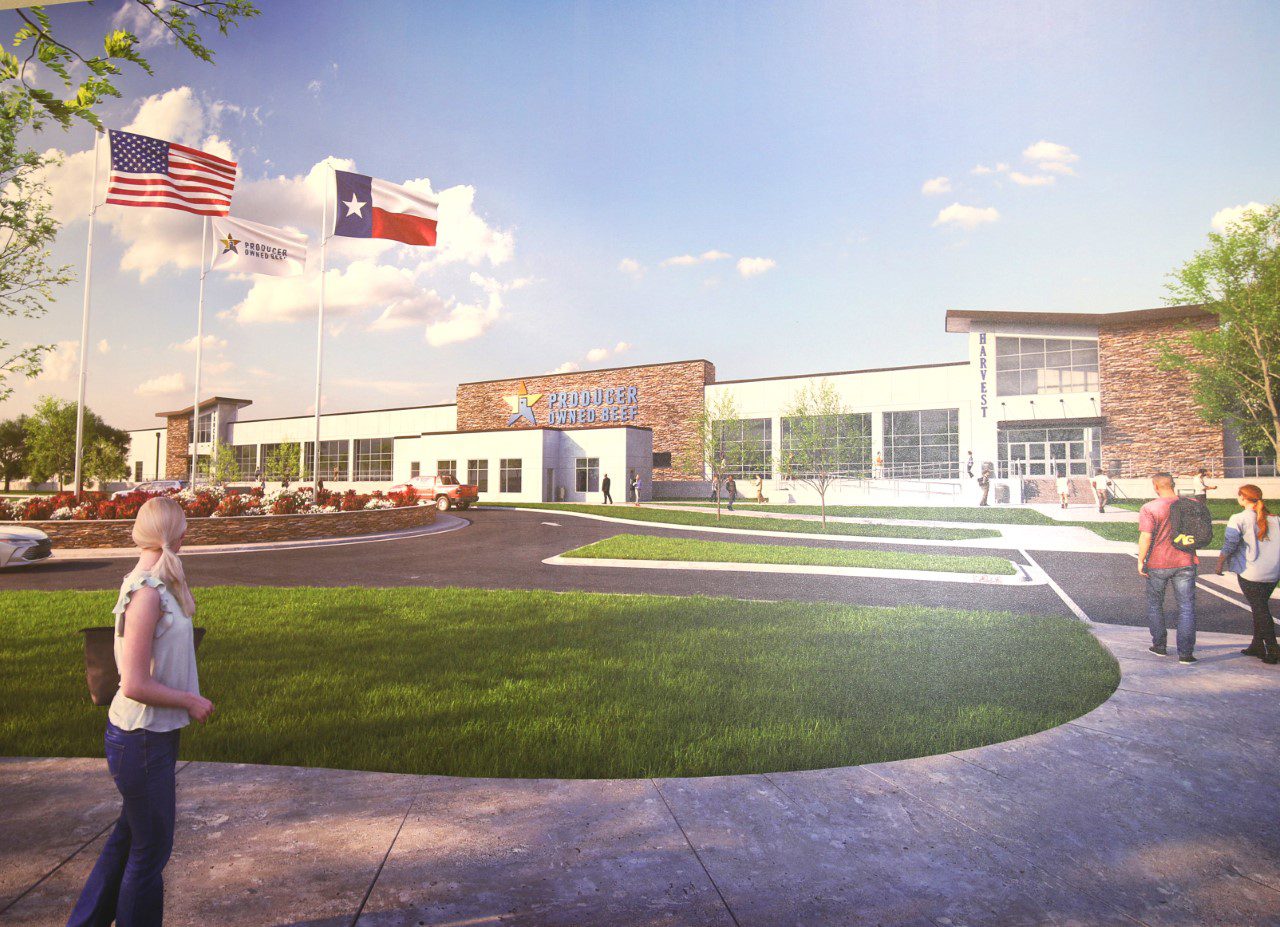 There’ve been thousands of cattle deals made in Amarillo. The Ware family’s Amarillo National Bank has financed many of them in the bank’s 130 years. So when fifth-generation William Ware declared, “This is the largest cattle project we’ve ever been part of,” there was no doubt the newly-announced Producer Owned Beef packing plant was a paramount project.

Producer Owned Beef (POB) was formally launched on Aug. 10 in downtown Amarillo. Everyone from Gov. Greg Abbott in Austin, to small cow-calf or grow-yard guys from Texas, Oklahoma and New Mexico were represented. The latter was interested in how they can be part of a $670 million ultra-modern packing plant that will cater to producers from those three states.

POB officials indicated it is the nation’s only producer-owned major packing facility. Groundbreaking is set for early 2023. It is scheduled to be completed and harvest cattle by late 2025. The operation will be run by seasoned veterans in the beef processing industry and have continuous input from cow-calf producers and cattle feeders.

The processing facility will be built just east of Amarillo along Interstate 40. It will be just a few miles south of the regional Tyson plant, and within an hour’s drive from JBS in Cactus and 90 minutes from Cargill in Friona.

The facility is designed to process about 3,000 head of cattle per day and aims to employ nearly 1,600 people at full capacity. As owner/investors in the company, producers set to receive a percentage of wholesale beef prices for the cattle they supply and a share of the profits from the plant.

“Our commitment is to build and operate a beef processing facility that stands out from the rest of the industry in animal well-being, environmental protections, team member safety and ergonomics and the highest quality beef products,” said Casey Cameron of Amarillo, chief executive officer and long-time cattleman.

Beef industry leader Monte Cluck of Bourne, Texas and president of Dean Cluck Feedyard, Inc. is a POB board member. He helped spearhead the new mega cattle venture. The idea grew due to producer and feeder frustration regarding market transparency, profit differentials and other factors that often distanced producers from packers economically.

Cluck said POB’s business model helps restore balance in the beef industry by reversing the compensation disparities cattle producers currently face. “Many of our ranchers and feeders are third-, fourth- or even fifth-generation producers who have invested their lives in feeding Americans,” he said. “With this model, where producers are also owners, we’re creating economic sustainability for small and medium-sized producers by ensuring they receive a greater share of the financial upside for the hard work they do.”

Although POB will welcome cattle from Oklahoma and New Mexico, most will come from Texas ranches. That will tie in with Gov. Greg Abbott’s “Made in Texas” campaign to promote state business development. In a video presentation during the outdoor launch, Abbott announced a $12.2 million award from the Governor’s Enterprise Fund. He congratulated POB officials and Amarillo Mayor Ginger Nelson for their efforts to promote local enterprises and expand beef processing capacity.

Nelson and the Amarillo City Council have approved $11.1 million in land and tax abatement incentives through the Amarillo Economic Development Corporation. “We’re the only place in the nation to have a producer-owned beef packing plant,” she gleamed. “We are decreasing our reliance on foreign ownership and supply chain decisions that affect our food supply, not just here, but the country and the world.”

Ware, whose great-great-grandfather started Amarillo National Bank in the 1890s, welcomed the POB launch. “We (ANB) came to Amarillo to follow the cattle business because we knew it was going to be big,” he said. “This is the largest cattle project our bank has ever been part of in 130 years. There is a tremendous amount of support from banks in this area and across the state. Because of this project our economy is going to continue for another 130 years.”

Already Up 100 to 125 Producer Investors

There are up to 125 producer investors already involved in the project, said Cassie Fish, POB executive vice president and consultant in cattle feeding and meatpacking. More producer owners are expected from across the region.

Cameron said, “Texas is the number one state in the nation in cowherd size, it’s number one in cattle on feed and number three in harvest capacity. There is a (processing) deficit here. For the health of our industry, this processing facility is truly very important and truly a producer-owned plant.”

Most cattle from Texas, Oklahoma and New Mexico are already fed in Texas. With POB investment, they can market part of their cattle through the new plant and tap into the value chain. “Amarillo is a logical place for this plant,” Cluck said. “25% of the nation’s fed cattle are from within a 100-mile radius of Amarillo. Our roots are here. But we have cattle that leave the Panhandle and go to Colorado and Kansas every week to be harvested.

“The cattle producer is limited in his ability to work his way up the chain in processing and wholesale or retail. This (new operation) is producer owned and producers will receive portions of the plant’s profits. Conservatively, that equals about $200 per head.

“At 700,000 head harvested annually, that’s an extra $140 million that stays in our rural area. Rural America is building this plant.”

Fish indicated that regional packers “do a great job, but when you think about it, this is about keeping those cattle here, the beef here, the dollars here.”

Kevin Buse of Hereford, chairman of the Texas Cattle Feeders Association, reiterated to CALF News that producers are the keys behind POB. “This has been a long time coming,” he said. “We’ve needed for producers to be the name and face of our product and be recognized for our long, hard work.

“It’s a grassroots project, from the farmer and rancher to stocker operator. It’s not a just a feedyard program. It’s a producer program. We’ve needed this for a long time, to represent our own product.”

Ross Wilson, project consultant who recently retired as CEO of Texas Cattle Feeders, stressed the importance of the producer-owned plant, “This is a game changer for region’s economy, cattle industry and many other things. Profits to producers will flow back into the local economy. I want to thank producers who had the visions for what this will do for the industry.”

Fish said producer-ownership will put consumers in closer touch with farmers, ranchers and cattle feeders, adding that POB will likely furnish a higher quality locally-branded product once the plant is operating consistently.

Cameron pointed out that building the producer-owned plant will help expand the legacy of regional cattle production. “This is for the younger generation,” he said. “It will give them more value from the food chain, better profits and a place where they can grow.”

Cluck said the plant and its producer owners will contend with the cattle cycle, which is now showing fewer beef cows, partly due to the drought. “This plant will not operate before 2025. We always have cycles and things come back around,” he explained.

“This project is food security. The drought is already not as severe as it was six weeks ago. From South Texas to the Canadian border, the only way to harvest grass in western states is with a rumen animal. At some point, when it rains we can harvest that grass. We will repopulate.”

Reaction from the major packers will be no doubt be gauged, as it will for other regional packing plants that are in the works nationwide. “This plant will not harvest all

of the cattle that any of us regional producers raise,” Cluck said. “We will continue to work with packers.

“I have continuous relationships with packers. In most cases we are friends. Again, after this plant is built, Texas will still be number three (in packer capacity). There are plenty of cattle to go around.”

Cluck, his POB team and other regional producers expressed excitement after the POB launch. “Today we witnessed genuine happiness from Amarillo and state officials about the progress of this plant,” he said. “Mayor Nelson couldn’t have said it better.”

And if William Ware’s enthusiasm was any indication – POB and its rewards for the region are going to be big for a long time.