A Hell Of A Ride 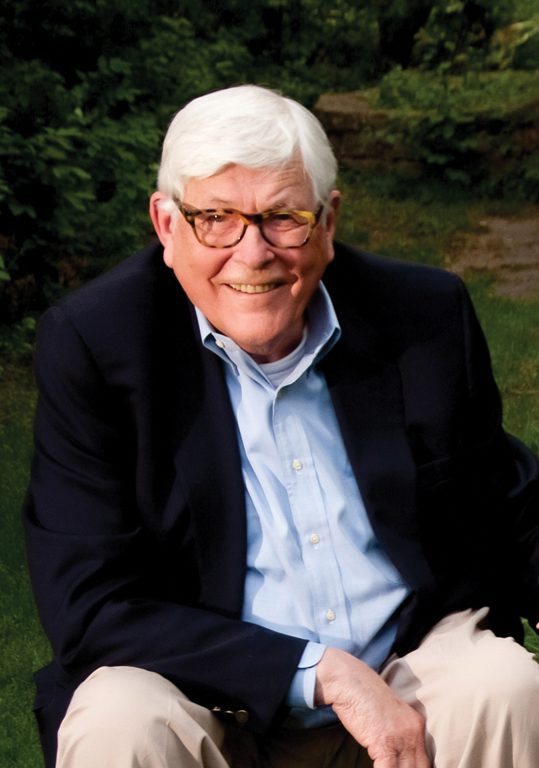 Publisher’s note: Not long after I left Lextron, Inc., to join CALF News, I began writing stories about the history of the cattle feeding industry. I had the opportunity to interview many of the major players who pioneered the industry, including Willard Wall, who is featured in my Recollections column in this issue. I also asked Dr. Bob Hummel, my former boss, for an interview. He replied that he was not ready to be history. He still isn’t, but after earning the 2019 Cattle Feeders Industry Leadership Award, his story was told and it is a history to be remembered. Here’s to Dr. Bob.

While going through the breakfast buffet line in the hotel after a company celebration the night before, I heard a familiar voice. “It’s been a hell of a ride, Jim,” came the refrain from my old boss. Dr. Bob and Jim Loughlin were reminiscing about their forty-some-year partnership and what a ride it had been for Animal Health International. The occasion had been celebrating corporate secretary Bonnie Sowder’s retirement after 33 years with the company. After graduating from The Ohio State University with a bachelor’s degree in agriculture and a doctorate in veterinary medicine in 1961, Hummel joined American Cyanamid Company as a technical service veterinarian. While there, he met and worked with Jim Loughlin, Cyanamid’s feed additive distributor.

Working in the California territory, Hummel realized that, although the West Coast cattle feeders had an advantage in availability to advanced technology, the crops and the cattle  were actually in the Midwest. He came to believe that the industry would move east into the Plains and he wanted to be a part of it; all he needed was a financial partner. He first talked to Willard Wall who was already established in the distribution business, but Wall turned him down. Wall was quoted years later saying, “It may have been my biggest career mistake.”

Hummel then approached Loughlin and, as the story goes, Hummel’s contribution of $10,000 was to come from the sale of his house with or without wife, Carol’s, knowledge as far as anyone knows.

Chub Kline, Hummel’s presenter at the Cattle Feeders Hall of Fame Awards Banquet in February, explained how that all happened. “I asked Jim one day why he took such a chance on the young 30-year-old Hummel, and he stated, ‘with Bob’s air of confidence, cigar in this mouth, leaning back in my chair with his feet propped on my desk, I didn’t see him going away, so how could I refuse him?’”

Kline is one of Hummel’s long-time employees, working for Dr. Bob for 36 years.

The decision on the location came as a recommendation by W.D. Farr, who told Hummel it made sense to headquarter where the feedyards are. Farr was right.

Soon after getting set up with distribution companies, the duo bought Parker Livestock in Fremont, Neb., and opened several other locations. By 1975, they had a total of eight warehouses located in Nebraska, Colorado, Kansas, New Mexico, and the Texas and Oklahoma Panhandle. They also bought Parker Livestock Supply in Billings, Mont., and V.A. Snell in San Antonio, Texas.

“During the next 35 years, we focused on internal growth and streamlining our business processes,” Hummel said. “We gradually began centralizing our accounts receivables and payables, human resources, billing, marketing and advertising, purchasing (particularly the large purchases) and fleet management.

“As the years progressed, we once again expanded across the country – either through acquisition or start up – to be able to service the hog, dairy, farm stores and, finally, the companion animal veterinarians. Each class of trade presented both challenges and opportunities.”

“Bob realized he needed to differentiate himself from others, and he needed to invest in his customer base to ensure their sustainability,” Kline said during his presentation. “So, in the early 1980s, he went to work resolving those concerns by investing in and developing technology. This technology could be utilized by the feeding industry, allowing them a fast, accurate way of tracking animals throughout the feeding period, and keeping track of their health and feed requirements.

“In 1983, we hired Betty Jo Gigot, who had feedyard experience, to build a vet records system. This allowed the tracking of individual animal health records for sickness [and] treatments used, which made it easier for feedlots to bill the customer for products used to prevent illness or treat each animal, and remain in compliance with government-mandated withdrawal of drugs prior to slaughter,” according to Hummel.

They later acquired Turnkey, a feedyard software company out of Amarillo, Texas, that offered feedyard financial software Advanced Livestock Tracker and accounting software FY 3000. They also invested heavily in PCC, a company that enabled feedyards to compare themselves against their peers.

“This accumulation of technology now supports a large percentage of the cattle on feed in the U.S. today. Others soon followed with their technology offerings, helping to stimulate continued growth within this segment of the industry,” Kline said.

In 2015, the partners and lifelong friends sold the business to the Patterson Companies. Many of the foundation and business principles Hummel embedded into his company are still evident today.

“Dr. Hummel was never bashful about giving credit where credit is due and he would often state that ‘his team got this company to where it is today,’’’ Kline said. “He would constantly remind us of one of his favorite sayings, ‘The customer always votes last.’ He often stated, ‘I am just the janitor around here.’

“However, he has always been the inspiration and driving force behind the company. Bob’s knowledge of the livestock industry and the world of business through feeding cattle and dealing directly with his customer base has taught many young men and women how to survive and grow in this industry.

“Many of you in this room tonight have either sold Bob Hummel products or have bought products or services from Bob, and it’s probably fair to say his presence could never be ignored. Well, trust me, working for him was much the same. The key to working for Dr. Hummel was like others of his age group – show up on time, work hard, don’t lie or steal, and show that you care about your co-workers, your customers and, ultimately, your company.

“He has always set the example and a high bar in all these categories. When asked why he worked seven days a week, he stated, ‘I have no hobbies. This company is my hobby’.

“With the sale and his supposed retirement at 78 years of age, I asked Bob a few months back what he missed most about leaving the business. He said, ‘I miss the people of the industry that I’d gotten to know so well. I would like to think I helped a few retirement programs through my efforts within our company.’”

I was reminded of a conversation Bob and I had when he called after my husband, Dean, passed away. His company’s sale had just gone through and I congratulated him on how it had gone.

“I like to think I took a number of good people along with me,” he said. He did.