Angus Genetics Help Keep the Olsons in the Black 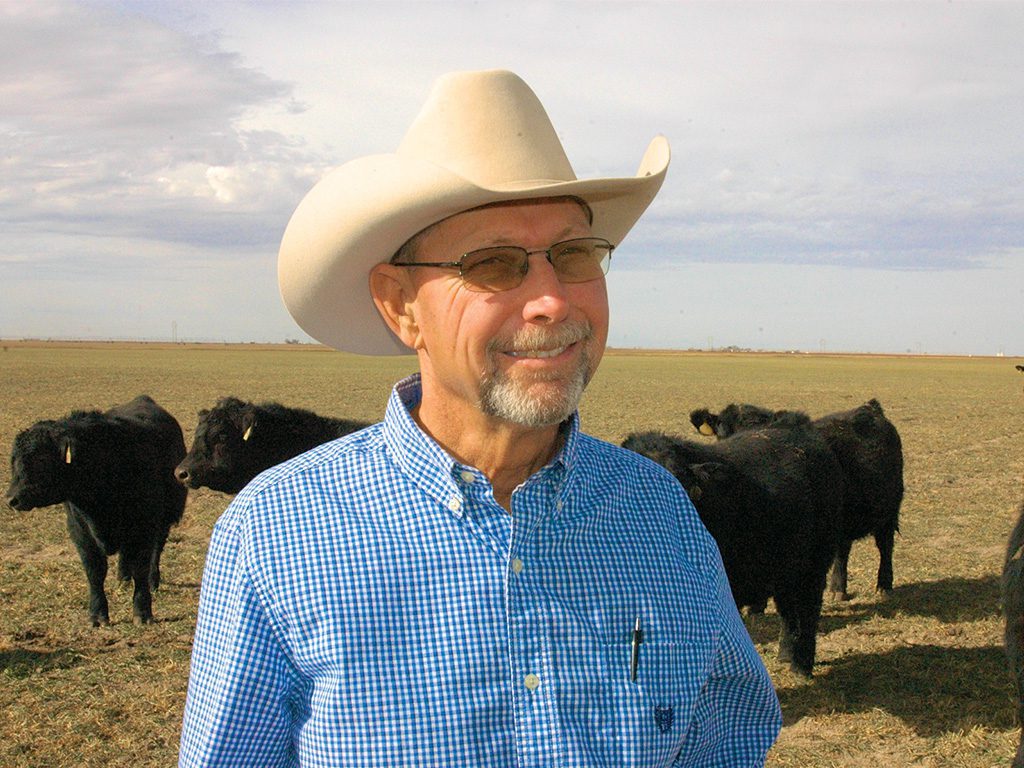 In early January, Steve Olson delivered 55 steers to a local feedyard. It’s something he does nearly every year. Of course, his goal is to profit from added weight when the cattle finish. But he’s also eager to see carcass data that will help his family gauge the quality of genetics in both their commercial and registered Angus herds.

Olson Land and Cattle is located about 10 miles southwest of Hereford, Texas. It has been in operation since the 1970s, after Olson earned his animal science degree from Texas A&M University in 1974. He and his wife, Ginger, and his father, George, began operating a diversified crop and livestock program that led them to producing registered Angus.

The Olsons are in the perfect place for primo feeder cattle production and marketing. They are within a few miles of a dozen or more commercial feedyards. That makes his Angus calves and others with prodigy from Olson breeding stock a regular target for buyers seeking feeder calves that will perform and stay healthy.

This March’s annual bull sale will include about 70 registered bulls. Olson’s daughter, Moriah, and her husband, Scott Pohlman, will offer additional bulls at the sale. Although they’re not among the largest purebred Angus outfits, the quality of their genetics continues to attract buyers from several states.

“All of our animals are born and raised on our ranch,” Olson says. “We maintain a detailed animal health program to assure that our cattle can perform at their highest level.”

In their cattle program, about 175 registered cows will calve this year, along with another 100 commercial Angus cows. Calves and commercial replacement heifers run on wheat pasture during the winter. The calves retained through the feedyard are marketed on a grid. The 2017 yearlings were weaned in October at about 660 pounds. They were placed this Jan. 7 at 790 pounds. The Olsons market their registered cattle via consignment and private-treaty sales.

“We’re doing a new project this year,” Olson says. “It’s a commercial heifer program in which we’ve bought calves from customers who bought bulls from us. We will AI these heifers and sell them private treaty.”

Still a diversified operation, they raise corn, wheat, sorghum silage and alfalfa under center pivot irrigation. The crops complement the cattle program, and have required lots of work over the years. Olson’s son, Sy, and his wife, Kristi, have been part of the crop and livestock program. A younger daughter, Joanna, and her husband, Brent Carlson, farm close by.

“Ranch transition is something we have always had on our minds,” Olson says. “My dad was a major part of the operation until he retired a few years ago. He turned 91 last year. In 2017, we also had transition with Sy. He has taken over the farming part of our program. That’s a big relief for Ginger and me. We’re just doing cattle and are really enjoying it.”

Good animal health is key to their cattle program. Since the Olsons are located close to feedyards and, more recently, an influx of dairies, disease pressure on their cattle can be high. “We take many precautions to keep cattle healthy across our program,” Olson says.

Vaccinating against BVD, BRD and other diseases is essential for their registered and commercial herds. The goal is to prevent stress, increase colostrum production and enhance overall reproduction. Just after birth, calves are placed on a scour-guard protocol. At branding they receive a modified-live vaccine to further protect them against disease. Along with vaccinations, they initiate a well-planned parasite control program at pre-weaning or weaning.

“We want to assure our customers that our cattle have been handled properly and are part of an animal health program that prepares them for the ultimate in performance when they leave the ranch,” Olson says.

Although he is a smaller operator, Olson has been quite active in the Angus Association. He has served on the boards of Angus Genetics Inc. (AGI), Angus Productions Inc. (API) and Certified Angus Beef LLC (CAB). He served two years as CAB chairman.

With 25,000 or so Angus Association members, any organization is likely to see some occasional rumbling. That was apparently the case in 2014. In November of that year, Olson was nominated from the convention floor as a candidate for association president and chairman of the board.

“Any leader is going to have resistance,” he says. “You have to become thick-skinned. There had been some dissention in the association. I thought the members needed an option, so I agreed to be nominated from the floor. I got elected, which was the first time an Angus Association president had been elected from the floor.”

His dedication to the Angus breed and the association behind it was strong. He had served on the association executive committee and board of directors for six years. That continued through his year as head cowboy.

The Texas Angus Association has also faced challenges. Up until the early 2000s, many producers still believed that the breed would not perform well in the Texas heat. Several TAA directors agreed to send some of their cattle to the feedyard to prove them wrong. The results were positive. Data was dynamic for the black cattle, which are now seen far into South Texas.

Olson wasn’t part of that TAA group, but followed the results closely. “We were pleased with the results and have seen an increase in numbers among Texas Angus producers,” he says. “The drought years of 2011 through 2013 hurt many people. Many had to cull much of their herds. But once we started getting rain, Angus numbers started rebuilding in Texas. We’ve seen a big increase in members of both the TAA and the American Angus Association.

“The fact that we had the national convention in Fort Worth last fall was a good boost. We’ve had a lot of feedback, and people liked the convention in our state. The association will be back in Fort Worth in 2021. That’s a great sign for us in the business.”

With their son handling the farming end of the operation, Steve and Ginger have more time to attend their grandchildren’s stock shows in Denver, Fort Worth and other areas. “I’d like to attend the NCBA convention in Phoenix [in late January],” he says, “but we have too much calving. We have to be here at the ranch.

“We love ranch life. We’ve certainly been blessed by it and I hope it continues for generations to come.”