At the Heart of Cattle Feeding Warren Monfort Kenny Monfort was an icon in the beef industry, but he wasn’t the brains behind cattle feeding in the Monfort family. That title belongs to Warren Monfort, Kenny’s father. 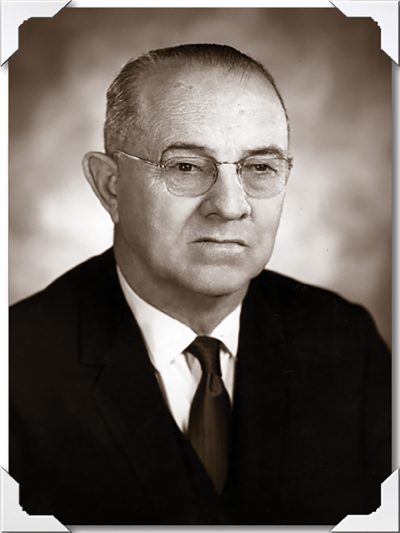 Warren’s father, Charles, moved with his family to the Greeley, Colo., area from Illinois in 1906, when Warren was about 14. He believed his farming prospects would be better at the base of the Colorado Rockies, away from the sometimes harsh Midwest weather.

Charles focused on poultry; Warren thought cattle could be a business – even though many raising cattle in the 1920s were going bust. In 1921 Warren began to feed a few, against his father’s wishes.

Charles died in 1930 at the age of 60; The Depression was in full swing. The mortgage on the property was more than the farm was worth. Educated as a teacher, Warren hadn’t enjoyed that career, so he decided to give cattle feeding a try full time.

He purchased 18 head and studied what he needed to do to get them fattened and marketed. He stopped cash cropping, instead raising food for the family and his animals. It was a milestone in the Monfort family. Kenny was not yet two.

Soon the whole family was involved in cattle feeding. Kenny’s older brother, Dick, was the heir apparent, but would be killed in action during World War II. Warren’s wife, Edith, kept the books for the family.

In 1941, Warren’s carloads of cattle outsold others in the Chicago market 23 times. In 1942, it happened 26 times, and another 25 times in 1943. By the time World War II started, Warren’s operation had risen to 3,000 head, which was huge by that era’s  standards. He was establishing an excellent reputation in the cattle feeding business, both for size and for quality.

Warren’s operation grew as much as the market and the lenders would allow. It was wise and steady growth; he increased the size of his lot to about 4,500 at the end of World War II, then hit 8,000 by 1950, when Kenny joined him in the business. There were fewer than 10 employees with the company at that time.

By 1955, the lots had doubled to 16,000; by 1960 they doubled again to 32,000. When Kenny started taking on more of the business in the 1960s, much of his focus was on the packing plant, built in 1959, meaning Warren was still the go-to man in the feedlots when they were feeding hundreds of thousands of animals a year.

Always known by his workers as Mr. Monfort (or affectionately as “Boss”), Warren was a highly respected and paternalistic employer. Employees got a free pail (later bottle) of milk every day to take home, along with a free hot lunch, and had access to gas for their vehicles at market costs.

In addition to paying excellent wages, Warren insisted on paying higher-than-market prices for the feed he bought. By doing so he would assure his sources were reliable and consistent. Business arrangements were done on the phone or by a handshake.

He worked diligently to keep his yards clean and reduce their impact on the environment. He was described as “fussy” when it came to cleanliness and reducing odors. Negligence by his employees was not tolerated; he was especially committed to the welfare of the animals. If seen mistreating a horse or other animal, that person would be out the door.

An extremely modest and humble man, Warren was not much for accolades. Kenny wasn’t either, although he deserved every one he received. Personally, though, I’m somewhat baffled that it would be Kenny, not Warren, who was the first Monfort selected to the Cattle Feeders Hall of Fame.

Editor’s Note: Walt Barnhart is the author of Kenny’s Shoes: A Walk Through the Storied Life of the Remarkable Kenneth W. Monfort. He lives in Littleton, Colo., and can be reached at carnivorecomm@msn.com.