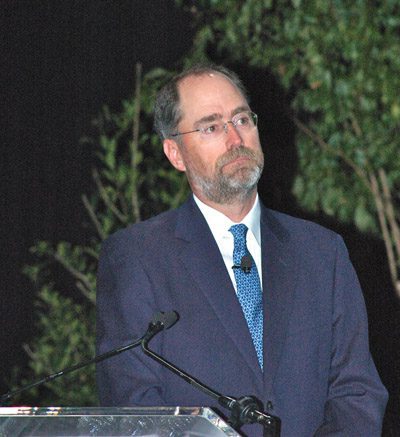 CattleFax presented its Annual Outlook Seminar at the 2019 Cattle Industry Convention to an interested and engaged audience. Altogether, their information provided a solid basis for predicting another year of moderate profitability for U.S. cattle producers.

CattleFax President Dale Smith anticipates record protein production in 2019, with beef, pork and poultry numbers up an astonishing 11 billion pounds in the past four years. Key to our financial survival is the strong demand for protein, both here and abroad. Our booming U.S. economic growth and export markets were up by double digits for the third straight year. On the bad side, slaughter capacity in the U.S. continues to be limited, causing leverage loss to cattle feeders. Nonetheless, feeder cattle and calf prices were supported by moderate profits at the feedlot from 2017 to mid-2018.

What about the additional tonnage of meat coming down the pipeline in 2019? Our profitability outlook is solid in the coming year because demand for our product continues to grow.

Meteorologist Art Douglas, Ph.D., in his annual Extended Range Weather Outlook, predicted a relatively mild spring in the Corn Belt with few planting delays as El Niño begins to slowly fade. Rains are expected to be abundant in the southwest United States, including New Mexico, Arizona, California, Nevada and Colorado. Texas may see moderate drought this year, and the Midwest can expect above-normal temperatures this summer.

The most interesting feature of Douglas’ presentation was his prediction of major drought in Australia, or rather the continuation of an existing problem that is moving into the major grazing areas of the western part of the continent. He described Australia’s condition as severe, and will continue to be. South America is in a similar situation. The question remains, how will that affect cattle numbers in these regions?

As food for thought, Douglas explained that the earth’s North Magnetic Pole is racing away from Canada toward Siberia. What does this acceleration mean? It affects sun spots, which in turn greatly affect our weather systems. The phenomenon is being closely watched by weather scientists and those folks who live by their compasses, such as merchant marines. It may continue to wreak havoc on our weather systems.

CattleFax Analyst Mike Murphy gave the Economy, Energy and Grain Outlook. Most important on the agricultural economy agenda is ratification of the USMCA, the new trade agreement between the United States, Mexico and Canada. It is likely to be completed soon.

China presents a more complicated problem, dealing with matters of their theft of U.S. intellectual property (IP) as well as a more severe trade imbalance and their burgeoning population. Their purchasing index is down, also a bad sign for their trading partners. China’s current African swine fever outbreak is severe, considering they feed the world’s largest population and contain the earth’s largest swine population, as well. Murphy expressed further concern that Brexit –the United Kingdom’s withdrawal from the European Union – needs to happen smoothly, as world trading partners shift positions in the coming year.

A most optimistic picture is painted with the U.S. Median Household Income, which has risen each of the past five years. It is up a whopping 15 percent since 2014. This points to greater demand for all proteins. Beef, being a premium product, is in a strong position to benefit.

The U.S. is now energy independent, due to a 70 percent growth in oil production in recent years. In addition, we are enjoying an over 400 percent increase in U.S. oil exports, and are the No. 1 energy producer in the world.

The U.S. is headed for record corn production in 2019 and 2020. This coincides with record cattle on feed, as well as record poultry production. Corn is expected to yield an average of 176.1 bu./acre, with prices predicted at $3.60-$4.00/bu. Tightening stock and the smallest carryover since 2015 will help ease the total supply situation, with yield to be a more important determining factor than increased acreage in 2019.

Good news for corn farmers lies in the record amount of feed and residue use due to the record numbers of livestock that will be produced in the U.S. this year. Also in favor of higher corn prices is our economic growth and expected continuation of drought in South America.

Bad news is on the ethanol front, where the decreased value of energy puts pressure on margins. Hay prices are expected to soften as the U.S. crop will likely experience favorable weather in 2019. Average price per ton is predicted to decrease from $157 to $145/ ton.

It is important for us to remember that cattle numbers in 2019 are up 6.5 million head from five years ago. They’ve rebounded due to profitability and good grazing conditions. These factors can change quickly, along with other external problems, making market volatility an ever-present challenge. CattleFax reminds us that although there is an optimistic outlook for the coming year, realistically, things have been good for too long.

Contraction in the dairy industry added an additional 30,000-40,000 head to cow harvest numbers in 2018, which hit an increase of 400,000 total head. Additional dairy herd disbursement will continue to challenge cull beef cow prices. In addition, fed steer and heifer numbers will increase by 1 percent.

We have pulled through the wettest winter since 1984, which is as long as records have been kept in cattle feeding areas. This is a “weather market environment.” Placements in feedlots will be disrupted this year on account of bad lot conditions. Supplies of feeders are tight now, but will become larger into the fall; this will lead to lower yearling prices late in the year.

Winter weather has also affected carcass weights, and will account for a 15,000-pound drop per week, through 2019. The damage is done, and will be the equivalent of 250,000 head of cattle. Still, with these losses, there will be a half-billion pounds more beef on the market in 2019.

Trade is our savior. Exports are expected to continue to rise 6 percent in 2019. A staggering 22 percent of U.S. beef value is accredited to our export market, adding $360 to each head of fed cattle. U.S. population growth of .7 percent per year is also beneficial in product consumption. Additionally, per capita beef consumption will continue to tic upward to about 57 pounds per year.

One unknown factor that looms ahead on world protein supply is the African Swine Fever outbreak in China and the potential for worldwide spread. Another issue on the horizon is “fake meat.”  We know it is there, and it must be dealt with, particularly in labeling and safety aspects of the new product. CattleFax believes it is still in beginning stages but may become an issue soon; it could hit the shelves this year.

Although poultry is the most highly consumed protein, and offered at the lowest price, beef will be able to compete because we are listening to the consumer. Since 2000, Choice and Prime quality grades have increased by 50 percent, making our product worth more. New technologies have increased traceability of livestock to the consumer and provided them with requested recipes, ideas and shopping opportunities.

The end of the CattleFax Seminar brought the long-awaited price forecasts for 2019:

Wrapping up the outlook, CattleFax CEO Randy Blach emphasized the importance of export markets to the United States. Now it’s time for us to go out and make these numbers happen.