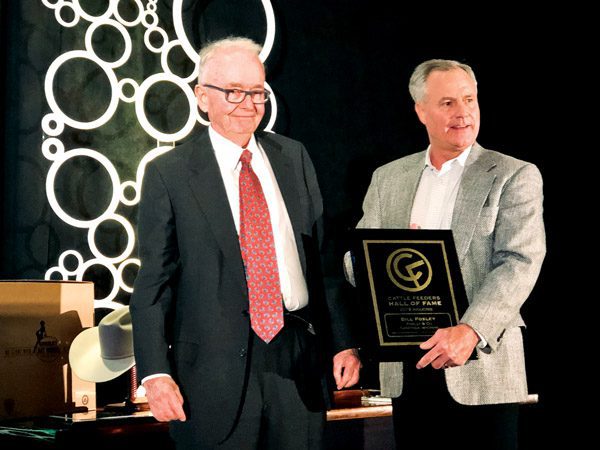 Bill Foxley, a self-taught, wheeling and dealing Nebraska cattle feeder and hedger, and James Herring, a mild-mannered Texas feedyard executive who helped foster branded beef and value-added production, are the newest members of the Cattle Feeders Hall of Fame (CFHOF).

These men were inducted during the CFHOF’s 10th annual induction ceremonies that kicked off the Cattle Industry Convention and National Cattlemen’s Beef Association (NCBA) Trade Show in New Orleans in January. The event also honored Jim Odle, recipient of the CFHOF Leadership Award for his role as a pioneer in satellite video cattle auctions and founder of Superior Livestock Auction. Jessie Ramirez, a 36-year employee at Brookover Feedyard, was recipient of the Arturo Armendariz Distinguished Service Award for exceptional feedyard employees.

Mr. Foxley was introduced by Dan May, a former Foxley associate now with LaVaca Cattle Co. of Colorado. May noted that Foxley once said, “The only way to discipline a market is with a checkbook.” That, and having a knack for knowing when to hedge, helped Foxley grow into the nation’s third-largest cattle feeder, with additional interests in grain handling and packing facilities.

He was founder of Foxley & Co., and got started in the early 1960s with a 15,000-head feedyard on the edge of Omaha. Foxley learned to sort cattle from his dad, who ran a small feedyard, as well as being a cattle buyer who sold for major commission companies.

After high school, Foxley attended Notre Dame University. Upon receiving his degree, he enlisted in the U.S. Marines. He had watched and learned from his father, who was among the cattlemen hit with major market downfalls in the 1950s. After his father got back on his feet, he was tragically killed in a traffic accident while on a cattle-buying venture in Texas in 1957.

Foxley wanted to get into the cattle business himself and later leveraged part of the inheritance from his father’s estate to build the Omaha yard. He was able to finish cattle with an efficient cost of gain.

“A lot of it was good timing,” Foxley said during his induction speech. “The futures market had just started, and people were starting to know more about nutrition.

“The whole industry was changing. I was able to get 100 percent financing from Connecticut Mutual and was like a kid in the candy store. I had to build another feedyard.

“I was doing all of the buying, selling and hedging myself. I’d get an inkling the market was going up. Sometimes I was right. I was probably the first to hedge cattle in a major way. I could lock in $40 per head profit. It was almost too easy.”

When the cattle marketed crashed limit-down for nearly two weeks in the early ‘70s, Foxley was hedged. He had locked in price protection after remembering how his father had suffered in the ‘50s. Foxley admitted risk management through futures trading is not a guarantee.

Lenders liked his savvy and provided financing for more feedyards, including the 65,000-head Bartlett, Neb., facility that featured half-mile-long covered sheds over waste pits, which fed irrigation of Sand Hills farmland. He also had a leveraged buyout of then-troubled Flavorland, a Fortune 500 meatpacker. He turned the company around the first year.

From Nebraska to Texas to Wyoming, Foxley & Co. operated numerous feedyards, elevators and packing facilities. Foxley ran them from a home office on the beach at La Jolla, Calif., outside San Diego. The operations were successfully sold in the 1990s. Over the years, he also acquired numerous works of Western art, which is now a prestigious collection in a Denver museum.

Betty Jo Gigot, CALF News publisher and herself recipient of the CFHOF Leadership Award in 2014, was excited with Foxley’s induction. “After many years, it was such a treat to see Bill Foxley again,” she said. “I had the pleasure of interviewing him many years ago at his office in California. His being honored with the Hall of Fame award was so well deserved.”

Foxley thanked the many people who helped make his company a success and didn’t mind mentioning some who he classified as “lacking character.” “Again, timing was really important,” he said. “I worked with good people who were not crooks. I was very fortunate.”

Risk taking has also been in James Herring’s blood ever since he sold his first cattle in the 1960s. He was introduced at the CFHOF ceremonies by Texas Cattle Feeders Association CEO Ross Wilson, who described Herring as someone who “has spent his entire career connecting beef producers with consumers.”

Herring was president and CEO of Friona Industries (FI) for 25 years before retiring in 2016. He grew up in the stocker business around Amarillo. After graduating with a business degree from the University of Texas at Austin, he took a job with Mesa Petroleum to build a cattle feeding operation in Amarillo. He also thirsted for knowledge and attended the Harvard Business School, earning an MBA.

Herring got involved with Friona in 1989 and was able to turn the failing company around. In the early 1990s, a Friona Industries feedyard worked with Texas A&M University and New Mexico State University to establish the Ranch to Rail program to help ranchers learn more about their calf crops.

Herring paid attention to the closeouts. “We were shocked at what we discovered,” he said. “Ranchers would send us a set of calves and there would be a $450 per head difference in the ultimate values. Genetic and production disparity made the $450 difference.”

“We got lucky in ’95 when we got the opportunity to partner with McDonald’s and Cargill,” he said. “It was the Beef Advantage Project, and it helped us learn more about production and carcass value. It allowed us to start thinking about beef as a brand vs. a commodity.

“We found that consumers valued tenderness and they were not getting that in many cases. We helped create a branded product based on tenderness. Now, FI has eight feedyards that finish 1.3 million cattle a year and a proven branded product [Rancher’s Registry] that goes into 3,000 stores.”

Herring said it was a “supreme honor” to be inducted into the CFHOF beside the likes of Ladd Hitch, Paul Engler and others. “Paul Engler taught me that the packer should be considered a friend rather than an adversary, that being close to the packer was a good thing for our industry,” he said.

“I knew Ladd Hitch well. He once said, ‘I’ve been broke three times. The first time everyone knew. The second time just my banker and I knew. The third time only I knew.’ There is a long list of entrepreneurs and real characters who built the industry and built our business.”

Herring has served on many boards and committees with NCBA and the Texas Cattle Feeders Association (TCFA), and was a TCFA chairman. He has received many other honors, including the Golden Spur Award from the National Ranching Heritage Foundation.

Wilson said Herring is a visionary businessman and industry leader. “He has an uncanny ability to foresee and capitalize on opportunities in the beef industry,” Wilson said. “The supply and demand chain model he created and successfully implemented at Friona industries, combining the power of a brand with a reliable supply of consistently high-quality beef was the first of its kind at such a large scale.

“It has been replicated by others and studied at the Harvard School of Business, a testament to the true value of his vision.”

Jim Odle received the CFHOF Leadership Award. Betty Jo Gigot introduced Odle, quoting his motto, “If you do things right, it will always come back and be right for you.”

He is a rancher-turned-auctioneer and has been successful in both professions. By the early 1960s, Odle has polished his auctioneering skills (much of it done from practicing while driving a tractor) and purchased Weld County Livestock Commission Co. He sold it a few years later and joined Brush (Colorado) Livestock Commission Co., which he owned until 1976.

His video sale ventures began with Odle Cumberlin Auctioneers. In 1986 he partnered with Buddy Jeffers and the Amarillo Livestock Auction to create Superior Livestock Auction – a nationwide cattle marketing network in which buyers can view videos of cattle, then bid on them via satellite.

Millions of cattle have been sold through Superior. Those sales grew into internet online sales as technology advanced. Odle sold Superior in 2007 and served as a management consultant until 2016. Always taking advantage of what satellite TV had to offer, Odle founded Cowboy Church TV, with national broadcasts on RFD-TV.

He still farms, runs a cow-calf operation and raises Quarter Horses near Brush. And Betty Jo still considers him one of her heroes. “He has been a counselor for farmers and others,” she said. “One of his pet projects is the All-American Beef Battalion, which he helped found. You will often see him shake hands or serve a steak to our servicemen being deployed or coming back from overseas.”

During his remarks, Odle said, “Ladies and gentlemen, it’s never one person. We’ve had great success because of all the great people who work with us. This banquet’s host state, Louisiana, has been good for us. Their cattle are as good as any others.

“That’s one of the biggest blessings out of Superior and VAC programs. Cattle get to the feedyard and you don’t have to treat them. High percent of death loss is just not there. It has been great for industry. Thanks to you cattle feeders who bought cattle from us.”

Brian Price of Brookover Feedyard introduced Jesse Ramirez. Price noted that Ramirez, “has been through the good and the ugly” in his 36 years at the Garden City, Kan., yard. “He’s always positive, and that impacts myself and the rest of the employees in the yard.

Ramirez was born and raised in Zacatecas, Mexico, on a family ranch with 13 siblings. He moved to Garden City in 1971 and joined Brookover in ’83. He is described as never having shied from “running into the occupational fire when most would run the other way.”

Small in stature, this positive attitude and never-say-no approach to the job has earned him the title of “Little Big Man” from his fellow employees.