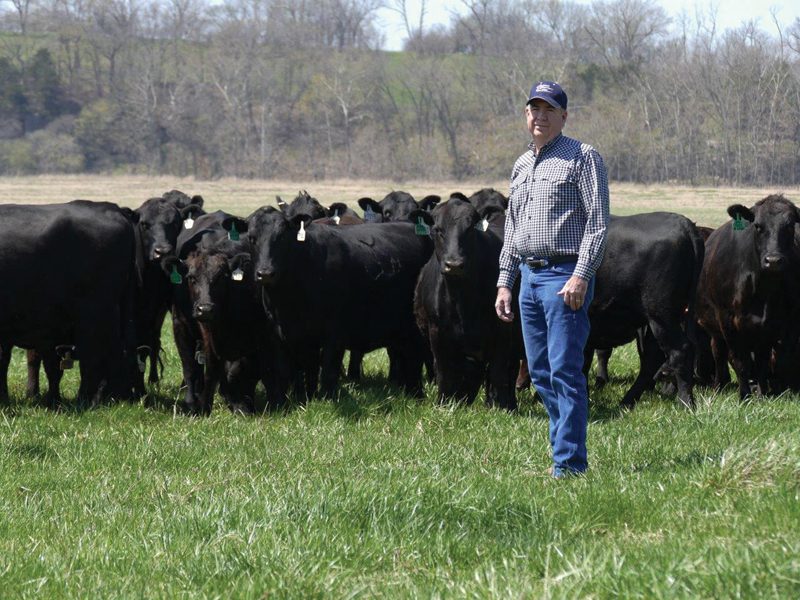 The Bridge from Cowman to Meat Case

By now, most of us are aware of the influence Walmart has had on America. Twenty percent of beef eaten in the United States passes through their meat case; a whopping 80 percent of us live within 10 miles of a Walmart store.

With those kinds of numbers, who’s the guy responsible for guiding public relations traffic and communicating with the many people along this incredible supply chain of beef? It’s Lamar Steiger, fresh meat consultant for Walmart and a cowman with roots deep in generations of agriculture. 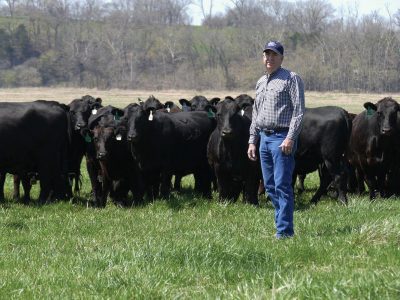 A Long and Winding Road

Steiger’s grandfather was a rug manufacturer in Wisconsin. He loved to travel and see the country, and eventually found his way to the Pitchfork Ranch in Wyoming in the 1930s. So enamored with the area, he purchased a ranch near Hulett, on impulse. His son, Don (Steiger’s father), settled there after serving in the military during World War II.

Hereford cows were purchased from Wyoming Hereford Ranch, and Don lived on the cutting edge of reproductive technology. He was among the first to employ artificial insemination (AI) in beef cattle in the 1950’s and used Charolais, Limousin and Simmental genetics as soon as they were available in the United States

A confirmed bachelor at age 30, Don reportedly went to an Episcopal church service in Sundance on July 4, 1954, where he spotted his future wife in a love-at-first-sight encounter. The feeling was mutual. The couple’s attempts to marry right away were thwarted by her mother, who was so distraught by the situation, she was “forced to take valium to recover from shock.”

Steiger, chuckling, says no one at that time had ever heard of valium. What was that?

Nonetheless, the duo wed quickly and moved to the Hulett ranch where they produced a family of six, Lamar being the fifth child.

A serious farm accident in the 1960s prompted the Steiger family to move to a warmer climate where Don’s old injuries were made more bearable. Steiger remembers their 1970 move to the Bentonville, Ark., ranch, particularly moving five potloads of Charolais cattle to the northwest Arkansas location.

After the move, Don raised beef cattle, ran a dairy and made a valiant effort at keeping several sons employed on the farm. The 1980s were a tough time; the elder Steiger was eventually forced out of business, and Steiger’s in-laws, Jack and Melba Shewmaker, purchased  the Bentonville ranch in 1983. They named their purchase Jac’s Ranch, and established a herd of elite purebred Angus. It operates successfully today, managed by Melba Shewmaker, and is the largest registered cattle herd in Arkansas.

Asked how he got to a prominent position at Walmart, Steiger explains his ambitious mindset – he had great role models.

“My dad was a cutting-edge cattleman, utilizing AI and new breeds. He was active in the Wyoming and national Beef Improvement Federations. My father-in-law, Jack, worked his way up to president of Walmart.” He climbed the proverbial ladder of success from the ground up.

Steiger laughs when he relates the advice of Jack Shewmaker: “If you want to be a bear, be a grizzly. They have more fun.”

Having a front-row seat during Walmart’s explosive expansion had a big impact on Steiger, recognizing the opportunity there as “the chance of a lifetime.” He wanted to be part of a successful business and have a meaningful impact. It was easy for him to identify the Waltons as practical, down-to-earth people who lead by example. He has been with the company as a consultant for six years.

The Evolution of Walmart’s
Beef Case

Walmart sells meat and believes that superior beef products drive customers to the store. Testing the pulse of consumers, management is continuously looking for ways to improve quality and selection of meats.

Six years ago, Walmart USA hired a new CEO. A New Zealander with an international resumé,  he complained that the U.S. beef supply chain was the worst he had to deal with, regarding consistency of product. Steiger explained to him that so many environmental differences across our country leads to many different breeds of cattle, feedstuffs and management methods – therefore, the inconsistency in eating experience.

The exchange in ideas led to Steiger’s role in listening and opening dialogues with the Walmart grocery team and suppliers across the country. He now accompanies contingents of grocers, employed by Walmart, across the United States. They visit cow-calf and stocker operations, feedyards and packing plants in an effort to exchange ideas with the people who handle meats on their last stop before hitting a grocery cart.

We all know that feedyards and stocker operations deal with mud, and some don’t look like parks when you get on the yard. I asked how it’s handled when rains accompany a tour of feedyard, or someone’s yard contains a 1962 Ford pickup, parked dead, under a tree. Steiger explains that tour stops are prepared for whatever weather comes up. They cannot hide mud or look like the city park, but Walmart people need to see reality. Discussions involve possible solutions and negatives are turned into positives. The lesson is, when we have challenges, they need to be addressed.

In addition, Walmart’s CEO has learned that, in a crisis, people buy beef and toilet paper. Ranchers and breed associations have opportunities to put together supply chains during tough times, remembering that people want to know where their food comes from.

In an effort to increase consistency and quality of beef, Bob McClaren of 44 Farms, Cameron, Texas, joined Walmart in producing Prime Pursuits® beef. It is non-hormone, verified humane and closely follows specs as stringent as other name-brand beef. Cattle are preferably sired by 44 Farms bulls and fed in participating feedyards in five states. They are harvested in an Arkansas City, Kan., Creekstone plant. After being broken into subprimal cuts, it is sent to Thomasville, Georgia. There it’s processed further into a case-ready product and makes its way to one of 500 Walmart stores in the southeastern U.S.

Steiger explains that these cattle are harvested at a lighter weight than the national average market animal; Walmart’s experience has shown that consumers want a somewhat smaller ribeye, cut thick and easier to cook or grill than a 1,600-pound steer will provide. Eating experience means everything when dealing with beef, and Walmart is zeroing in on what works.

Steiger’s personal life is as busy as his professional pursuits. He and wife, Shari, have three married children – Emily, Eli and Olivia. Eli has joined the Walmart team in the technology division, helping develop and implement blockchain usage, primarily in fruits and vegetables. The family is rounded out by granddaughter Sophie Jendak, a delightful 3-year-old.

Steiger and his wife own 808 Ranch, 35 miles north of Bentonville in Missouri. There they run 150 commercial, fall-calving cows and use them extensively for embryo transfer, in the development of a purebred Angus herd.

He says he feels like he has a “graduate degree” in meat grocery. He wishes to continue being involved with cattlemen’s groups and works internationally as a supply chain consultant. More than anything, he will spend more time with his granddaughter.

Lamar Steiger is a proponent of self-awareness; what are you good at or not so good at? We need to work on those we are not.

“Knowledge and skills can be taught, character and passion are caught,” he says.

In other words, we need to hang around with the right kind of people. Lamar Steiger is a good example.