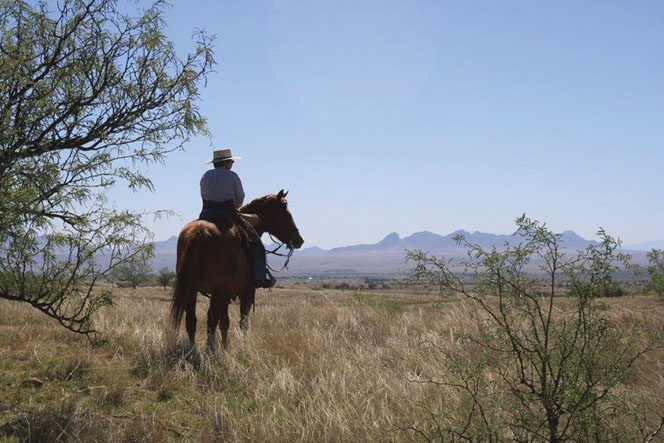 When the decision was made to title this issue “Celebrating People” I, with my charmed life, had a lot of names to choose from. One thing I haven’t been short of is mentors, or hard chargers, or characters, but when it I thought of those I admire and have made a difference in their corner of the world – and, yes, is a character to boot – Barb Stevenson Jackson fit the bill.

The youngest child of Carl and Pat Stevenson, Jackson spent her early years in a company town atmosphere in the small town of Continental, south of Tucson. Carl developed one of the first cattle feeding operations in Arizona for Farmers Investment Co. (FICO), and Jackson and her siblings grew up as part of the industry.

“We were always at the feedyard and worked hard,” Jackson says. At an early age, she helped ride pens. In 1965, the family started a family-owned feedyard just outside of Red Rock, Ariz., where they continue to feed cattle to this day. Carl, who turns 101 on Dec. 28, still plays an active part in operating the 30,000-head capacity custom yard manage by Jackson’s brother, Dave. Their sister, Mary Jo, works as the yard’s comptroller.

Dave drove Jackson to high school during her freshman year, but when he graduated she lost her ride. So the not-licensed 14-year-old would drive her VW Bug across the desert to an old air strip, park her car and walk a mile to the school bus stop.

The summer of her junior year, Jackson’s mother was diagnosed with cancer, so Jackson and her dad spent part of the summer driving back and forth to Los Angeles where Pat died in July.

After a few fits and starts at college, Jackson graduated from Washington State University with a degree in animal science and a minor in ag economics.

Upon graduation, Jackson returned to Arizona. Her lifelong dream had always centered around the family feedyard, Red Rock Feeding Company, so she ran the office and doctored cattle, but soon realized she needed another path. Imagine petite Jackson – barely five feet tall – and barely out of college, applying for a sales position with Syntex Animal Health.

As we all remember, in those days women weren’t representing animal health companies on the road. Jackson was one of the first to work in the Northwest and then New Mexico and the Texas Panhandle. Eventually, she was stationed at the Syntex home office in Des Moines, Iowa, as their director of advertising where she helped develop the well-remembered Syntex ad campaign that graced the back cover of CALF News for many years.

In late 1987, Jackson moved home to Arizona to test her entrepreneurial skills while working as a marketing consultant, primarily for the Southern Arizona International Livestock Association (SAILA).

Jackson married Tim Jackson in early 1989 and, in 1990, the couple took advantage of their backgrounds in ranching, cattle feeding and the pharmaceutical industry to establish Animal Health Express. The company offers mail-order, same-day services for livestock owners. In 2002, the couple added a brick-and-mortar facility in western Tucson. Vaquero Feed and Livestock Supply is a farm and ranch store offering their customers easy access to products and services.

While building a business and career in the cattle industry, Jackson contributed to the industry while working with the Arizona Cowbelles and, like her mother, Jackson was American National CattleWomen president in 2013. She also served on the Cattlemen’s Beef Promotion Board from 2010 to 2016.

Today, along with the two businesses, the couple runs a cow-calf operation southeast of Tucson and are restoring a turn-of-the-century ranch house on the property. Most days you can find Jackson and her English Shephard, Roz, keeping an eye on the far-flung enterprise, enhancing the industry she loves.