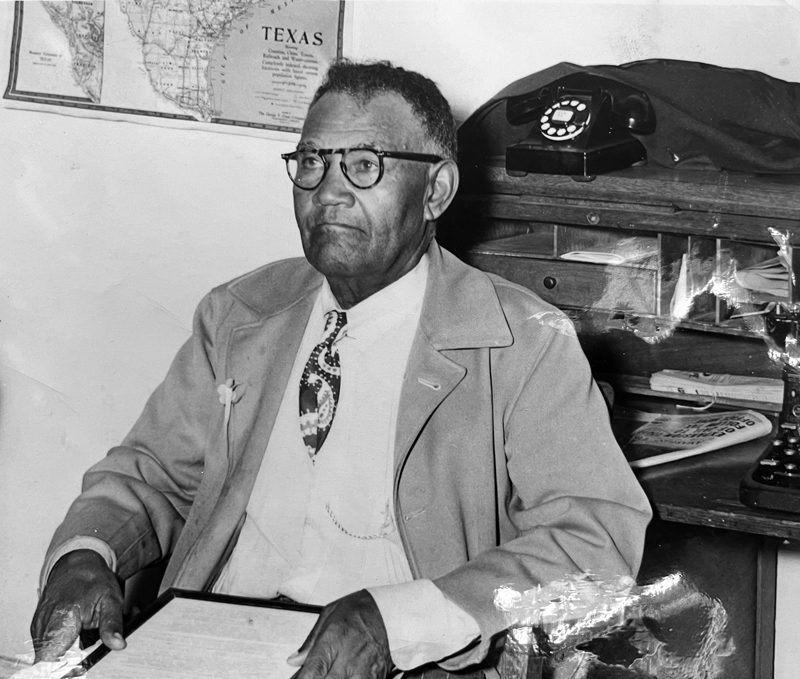 As a celebrated leader in Amarillo, Texas, Matthew “Bones” Hooks, spent nearly his last dime helping others in predominantly African American parts of the old cowtown. But with his stature as a bronc buster and wrangler who gave it all to break the meanest horse on any ranch more than a century ago, he was also legendary among many historical ranchers.

In tribute to his many successes as a cowboy and a beacon for Texas Panhandle minorities, Bones Hooks was posthumously inducted into the National Cowboy Western Heritage Museum Hall of Fame during the recent National Western Heritage Awards in Oklahoma City. He was honored along with Oscar-winning actor Robert Duvall and the King of Country Music, George Strait. 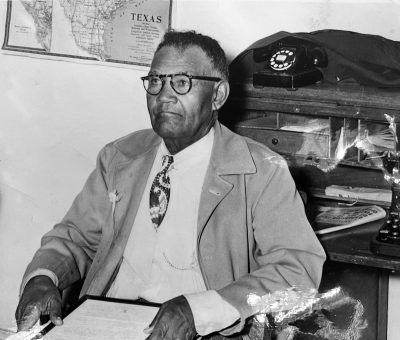 That quote was from the 2005 book Bones Hooks, Pioneer Negro Cowboy, by Bruce G. Todd. Todd paid homage to Hooks’ many accomplishments on the range and in town. Whether as a cowboy for Col. Charles Goodnight or the founder of the North Heights region of Amarillo, Hooks was a celebrated leader.

Many are familiar with Bill Pickett, the famous cowboy of Native American and black decent otherwise known as the “Dusky Demon.” He was elected to the Cowboy Hall of Fame in 1971. Old timers in the Texas Panhandle felt Bones (as he was known in the region) also deserved the honor.

The son of slaves, Bones was born post-Civil War in the late 1860s. He left his northeast Texas home at age 9 and was busting wild horses by the time he turned 12. Bones faced prejudice nearly everywhere he roamed. Still, as he worked from one ranch to another in the rugged Pecos country of West Texas, he became known as the best bronc rider in those parts. “He soon went into partnership with a white friend, Tommy Clayton, and had his own brand, B, presumably standing for Bones,” Todd writes in his book.

He worked most of the ranches of that region, but Bones admitted he wasn’t an all-around cowhand. He was a bronc-riding specialist, traveling to where a horse needed tamed. He made it to the Clarendon region in the Panhandle in 1886. He worked as wrangler and bronc buster for pioneer cattleman Col. Charles Goodnight and other ranchers.

Alphonso Vaughn, a Potter County commissioner in Amarillo, accepted the award for Hooks at the Western Heritage ceremonies. “As the only black man in sight, Bones was very lonely in the Panhandle,” Vaughn said. “But he loved the prairie country and orderly community, and was determined to remain there.”

Todd notes, “Goodnight never told Bones how much he appreciated his skills, but he spread the news all over the Panhandle to his rancher friends, building him an even stronger reputation.”

Bones settled in Clarendon in 1896 and married his wife, Anna, in 1900. He tried ranching in New Mexico for a few years. In 1909, he became a porter for the Santa Fe Railroad.

On one Panhandle train trip, Bones heard men talking about a horse that couldn’t be broke. He interrupted the conversation, told them he could ride the horse and wagered $25 on it. The mustang was in the Pampa area. When the train stopped, Bones removed his white porter jacket and put on his spurs. To the amazement of his doubters, he not only busted the bronc, but he rode him to a standstill. He collected is bet and was back on the train in a matter of minutes. His ride for the ages was memorialized by poems, songs and campfire stores.

As he became more at home in Clarendon, Bones helped start the Panhandle’s first African American church. He eventually moved to Amarillo and was only the second black to live there. With segregation as the norm, he established a separate community for blacks in Amarillo. He convinced his friend Mayor Lee Bivins to provide financial support to open North Heights. Bones invested time and money to establish a drug store/general store in the community.

Even though he and Anna had no children of their own, Bones became a father figure to hundreds of black children. Since blacks couldn’t join Amarillo’s Maverick Club youth organization, Bones started the Dogie Club in 1932. He mentored many boys in the club and got them involved in camping, planting trees and sports. He led discussions on life, good citizenship and why there was discrimination. Todd points out that Bones “told the boys that soon segregation would end, and they could swim in the city pool.”

Bones was known for bringing white flowers to the funerals of Panhandle pioneers. He also sent a single white flower to living dignitaries, including Franklin Roosevelt, Will Rogers and Sir Winston Churchill. In his lifetime he sent out more than 500 white flowers to people.

In his later years, his generosity to the North Heights community and across Amarillo left him low on resources. Due to the admiration he earned within the entire Amarillo area, the Amarillo Globe-Times newspaper started a fund for him when he became ill. Bones Hooks died in 1951. His funeral at the Mount Zion Baptist Church was filled with white and black mourners alike. Respectfully, each person placed a single white flower on his coffin.

From bronc rider to civic leader to father figure, Bones left his mark on the West. His heritage certainly deserves the recognition from the Cowboy Hall of Fame and Western Heritage Museum in Oklahoma City.

Bones remains a pillar among Amarillo area leaders. Bones Hooks Park, established in the early 1930s, is the heart of the North Heights community. In Todd’s research for his book, one boy who learned from Bones remembered, “If it hadn’t been for the Dogie Club, a lot of us would have gone astray.”

So it wasn’t just broncs that Bones helped corral. Even though his early proclamation that black children could soon “swim in the city pool” took longer than society needed to come true, his spirit lives on in Amarillo and the Panhandle.

Perhaps there’s need for a Hollywood script about Bones. Why, Robert Duvall could portray Col. Goodnight. And even though the title Amarillo by Morning has been taken, maybe George Strait could write a fitting song.

No matter what, the Cowboy Hall of Fame has gained a legend to rival others.