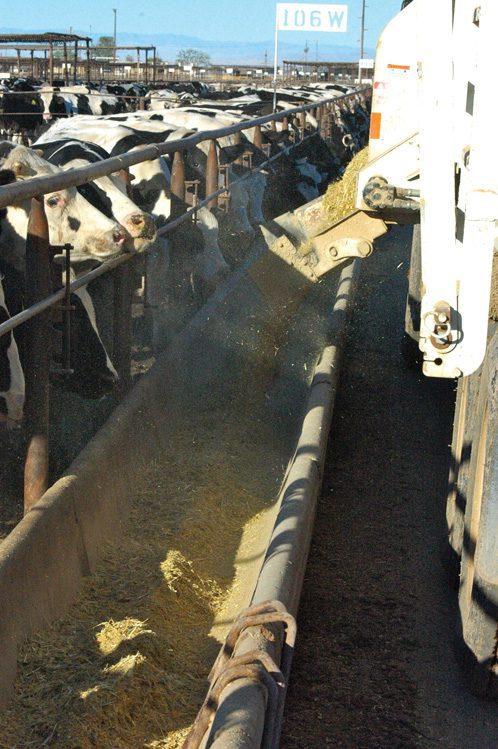 Three Generations of Desert Feeding at its Best

Joe Dan Cameron is among the new breed of California cattle feeders. While he seeks new technology that enhances beef production, he cherishes the history of his family’s feedyard, as well as his region’s place in cattle feeding history. 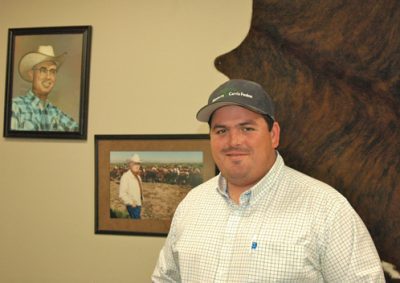 Joe Dan is co-manager with his dad, Paul, of Mesquite Cattle Feeders in Brawley, Calif. This Imperial Valley operation is among the most efficient in getting the most out of a sometimes harsh desert climate. When managed correctly, cattle finished at Mesquite and other regional feedyards see some of the best performance in the country and produce as high a quality of cattle that is seen in the business.

Traditional California desert feeding reigns at Mesquite. The large majority of cattle are Holstein steers purchased from regional calf ranches and auctions that are fed by the state’s enormous dairy industry.

Joe Dan’s grandfather, Dan Cameron, started the yard’s feeding program. That was in 1951, when he and Ed Rutherford formed what was then Orita Land and Cattle. They operated it until 1996. Joe Dan’s father along with Bob Presley and Greg Braun, then bought it, changed the name to Mesquite Cattle Feeders and continue to operate it today.

Now, Mesquite is highly diversified. It includes a hay export business, which sells to the Orient, the Middle East and some domestically. The Camerons also farm a variety of crops. Paul and Joe Dan’s brother, Sean, head the farming end of the business. In addition, The Mesquite Group also partners in a feedyard in Dodge City, Kan. – Lariat Feeders.

“This partnership is with Ken Winter,” Joe Dan says, adding that the expansion to the Midwest “was to spread the cattle operation to include more beef cattle, access to more packers and overall to diversify our business.

“We have three packers within extremely close proximity to the feedyard. We utilize our low roughage prices to grow beef calves here at Mesquite in the winter. When we have room, they are then sent to be finished at Lariat.”

But for Mesquite Cattle Feeders, it’s mainly Holsteins because of how well they perform in the desert climate. “We buy most of our cattle out of the San Joaquin Valley, with a sprinkling of cattle from Texas, New Mexico and Idaho,” Joe Dan says. “We have Holsteins on feed currently from all throughout the western United States.

Holstein calves are placed at about 300 pounds and fed to about 1,350 pounds. It’s a 365-day feeding period. About 60 percent of the cattle are custom fed, with the balance being fed by the ownership group.

“About 60 percent of the cattle are on an all-natural program – no antibiotics and no implants,” Joe Dan says. “They’re marketed through JBS [at Tolleson, Ariz.].

For the most part, Mesquite contracts for calves ahead of time. “Most calves are contracted three to four months in advance through private treaty with a calf ranch or over a video auction to assure that we have a steady supply,” Joe Dan says. “Once we find good supplies of calves, we usually try to stick with them because uniformity is a big part of feeding a good Holstein calf.

While many areas of the nation are likely less friendly to feeding large numbers of Holsteins due to colder climates and packers not wanting them due to an abundance of beef cattle, the Imperial Valley remains heaven for the dairy breed. They show it through their performance – at the bunk and at the packer.

“These cattle consistently gain more than 2.7 pounds per day as naturals and 2.9 to 3 pounds per day as conventionals. A good one will convert in the low 5s on a dry matter basis,” Joe Dan says. “The main ration is a primarily steam-flaked corn ration. Corn is purchased through unit-train shipments from the Midwest.

“Packers like our cattle because they grade a high percentage 90-95 percent Choice or Prime. They’re very uniform and are source verified for specific markets.”

Mesquite relies heavily on the cash market. “Due to a lack of competition for our cattle here in Brawley, the Holsteins are killed on a grid, which has a price based on a five-area average price,” he says.

Joe Dan and brother Sean grew up around Brawley, but have family links to the Texas Panhandle area in Hereford. That led them to select Texas Tech University for their college education.

“I attended junior college here and helped with a lot of feeding trials by our nutritionist, John Beckett,” Joe Dan says. “We collected data from National [former owners of a Brawley packing plant now operated by One World Beef]. People from Tech used the data.

“I met Dr. Brad Johnson, a meat science professor at Tech. My parents and I visited the school. I really liked the area and thought I’d like to get out of California for ag school. My brother Sean also attended Texas Tech. The education we received there really helped us get more involved with our operations here in Brawley.”

“We’ve always sprinkled our pens and alleys to help hold down dust,” Joe Dan says. “We have an audit to measure for air pollution every year and have to turn in records to the county and state air and water control boards annually. That helps us remain good neighbors to others in the area.

“Feedlots here have a good relationship with our communities. We sponsor many scholarships and take part in many community barbecues and other activities to help our schools, churches and other entities.”

Mesquite and other feedyards sponsor FFA production classes to teach kids about cattle. “A lot of kids can’t afford to buy a show animal,” Joe Dan says, “so local feedyards provide animals for them at a lower cost. They are allowed to select a 600-beef or Holstein steer that is bought at a fixed cost. They then feed them out using feed procured from local feedyards. We teach them how to handle cattle, implant cattle and feed cattle.

“Then, the cattle are judged in the ring and on carcass quality. They learn about our business. This is one way we get more community members involved. Ag is our area’s biggest employer. Other than that, the only other major employers are the county government, irrigation district and prisons. So it’s important that we help our local kids learn about cattle and crop production.”

Joe Dan admits it can be tough to deal with the many added environmental regulations that interfere with cattle feeding. “But even though we have all of these regulations, this remains a very good place to feed cattle.

“The climate is perfect for feeding cattle eight to nine months of the year, when temperatures are extremely mild. Our corn basis is high, but we have easy access to a lot of good quality roughage and other feed ingredient.

“I love the feedyard business. I grew up in it. I love working alongside my dad every day and hope my son is the fourth generation. I love our area and I love to travel throughout the Midwest to look at other feedyards and learn new things.

“I’m proud to be part of our family operation and to be a cattle feeder.”