By Will Verboven, Contributing Editor

There are times when one wonders if there is a grand conspiracy by self-appointed consumer lobby groups, politically correct academics and busy-body government bureaucrats to disparage meat consumption and beef in particular. 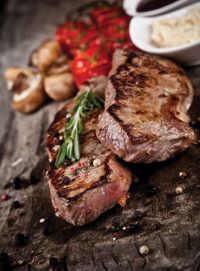 I expect most readers can recall seeing some study or survey alleging that consumers are reducing their consumption of red meats. Sure enough, another tedious study has been released that, once again, is predicting the imminent demise of meat consumption in Canada. It all sounds so familiar couched in the usual scientific buzzwords and spin doctoring designed to get the attention of gullible urban media.

They then add their misguided observations on the matter with sensational headlines. One frenzied city media outlet even interpreted this study as a message for livestock growers to consider getting out of the doomed meat production business. The hidden focus was on beef consumption even though the study was on meat in general. Apparently, if the consumption of chicken or turkey declines it’s not of as much interest to salacious-minded city editors.

Fear not livestock producers, you are not about to be put out of business by the world’s consumers suddenly intending to switch to a vegetarian diet of tofu and turnip pie, despite what this study alleges.

The survey that caused the media frenzy was put out by Dalhousie University of Nova Scotia in eastern Canada. The study had the cumbersome title, “Plant-based dieting and meat attachment: Protein wars and the changing Canadian consumer.” It was released to coincide with World Vegan Day on Nov. 1 – no accident there, as publicity-hungry researchers and universities have become adept at manipulating the news media. I suspect that the vegetarian lobby group propaganda machine was alerted to this study in advance and will have been touting and promoting it as proof that meat eating will soon end, and the planet will be saved. Naturally everyone knows that climate change can only be really stopped if everyone switches to a diet of kale and celery salad. But I digress.

One notes a growing trend among survey researchers to extrapolate a miniscule survey into an accurate reflection of the vast majority of consumer opinion. The Dalhousie survey was based on a three-day survey from 1,027 respondents – from that the researchers made the astounding claim that 6.4 million Canadians (out of a population of 32 million) were going to restrict their consumption of meat, with one-third doing so in the next six months!

Wow! Looks like it’s time to shut down meat processing plants right away. Curiously, 97.72 percent of those surveyed stated that they were meat eaters of one sort or another – that fact was not highlighted in the press release. Another factor not mentioned was the socio-economic, ethnic and geographic composition of those surveyed. Was the survey composed of the Alumni of Dalhousie University, or slanted toward folks who had time and interest to do online surveys? Of the 1,000 respondents, how many were ordinary working-class folks – 2 or 200? How many were young Millennials surfing the web to kill time?

Not detailing the respondents’ economic and social status was either naïve or willfully ignorant. On the other hand, do survey researchers actually believe that a person responding to an online survey will admit that they earn less than $20,000 and are an undereducated white male? Recent elections have shown the shortcomings in how short-sighted survey population segmentation methods can produce dubious results.

The other overriding aspect to this survey was how the questions were posed. They at times dripped with political correctness and emotion. Here are some gems to consider from the survey questions’ premise.

Gullible young trendy folks are literally forced to answer in the politically correct manner to such loaded questions. To be fair, the survey posed a number of favorable perspectives of meat, but that was not emphasized in the summary. The survey stresses that older, less-educated males tend not to change their meat-eating intentions – somehow that seems to be interpreted as bad.

The survey study highlights that many consumers regard the health aspects of eating meat as important to their consumption considerations. Be that as it may, the survey notes that price and taste together are more important. More objective meat consumption surveys have already observed that consumers tend to be fickle and buy with their wallet and appetite and rarely for health reasons. The ever-increasing numbers of hamburger and chicken fast food joints would indicate what consumers really think when considering their meat purchasing intentions.

Interestingly, those joints are packed with young people of every socio-economic level. Those would be the same young folks that state they are reducing their meat consumption. Interestingly, as hard as the anti-meat folks try to predict the end of meat consumption, there seems to be little interest in establishing vegetarian fast food joints. I rest my case.