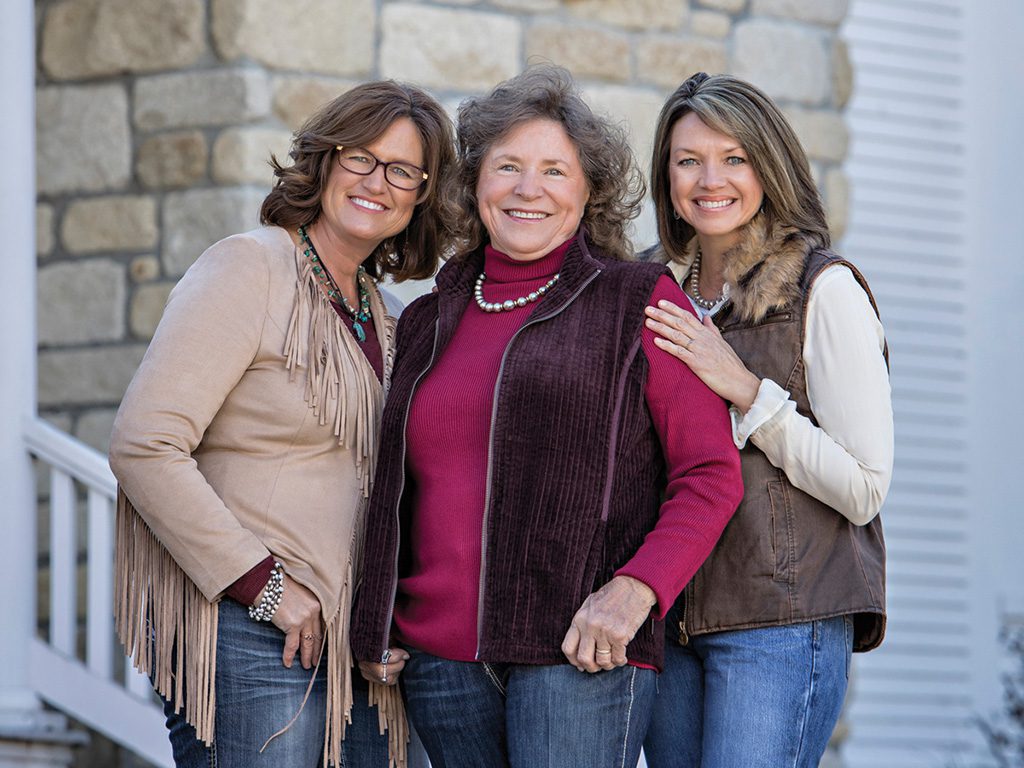 Families offer security, guidance and love. Fortunate and farsighted families offer a bonus – a legacy. One Kansas family has passed on a legacy of industry service up their family tree to benefit cattle producers everywhere. At its roots stands a strong woman – Jan Lyons.

Jan began life in Ohio, where she was raised with five siblings on a farm. She worked with her father in the field and discovered her love of Angus cattle as a child. Attending Ohio State University (OSU), she majored in education, but only after an advisor told her that “women don’t major in agriculture.”

Fortunately, that’s the last time anyone got away with deflecting the strong-willed woman from cattle. She met and married Frank Lyons while he earned his degree from OSU’s medical school. Frank joined the Army in 1969 during the Vietnam War and was eventually stationed at Fort Riley near Manhattan, Kan., in 1974.

By the end of Frank’s military service, the couple had two daughters and had decided that they liked Manhattan just fine. Their longing for ranch life and Jan’s abilities as a hands-on kind of farm girl led the couple to purchase a nearby place, one where they could give their children a good work ethic and dive into producing top-end cattle.

The 1977 move enabled Jan to blossom into ranch management while Frank, always supportive, continued his medical career. Their daughter Debbie relates that the “whole family worked together on the weekends. The cows didn’t care whether it was a man or a woman who fed them.”

It was during this time that Jan became involved in the cattle community on a broader basis. Taking her two daughters to Angus shows, she attended Kansas Angus Association (KAA) meetings. She eventually became KAA’s first woman president. Jan’s leadership traits continued to be in demand, and she became the first woman president of the Kansas Livestock Association (KLA) in 1994. Jan’s work with the Kansas Beef Council and Cattlemen’s Beef Board eventually led to her become the National Cattlemen’s Beef Association’s (NCBA) second woman president in 2004.

Jan and Frank are currently working on transitioning their ranch to the next generation. Daughter Amy and her husband, Karl Langvardt, are the capable ranchers who have eased into the ranch management role.

The older of the two girls, Debbie Lyons always knew who she was. From an early age, she wanted to raise cattle. After a successful junior show career, she found ag journalism a useful college major and wound up attending Kansas State University (KSU). Contrary to her search for a rural-only lifestyle, she married banker Duane Blythe, who is head of the trust department at Central National Bank in Junction City, Kan.

Duane is no city dude, however strong his ties to a bank. His family’s farm was established in 1890 and that’s where the young couple landed. True to her mother’s example, the active Kansan took over daily management of the ranch and expanded the cow herd while raising five children. Their cow herds consist of registered Angus and crossbred cows, with Angus bulls sold privately. Debbie is especially proud of their heifer development program; the Blythes breed and market 250 head of bred heifers annually, mainly blacks and black baldies.

“Duane has always encouraged me to be involved in the ranch, and we are a great team,” Debbie says.

She believes in the importance of continuing education, and appreciates the time she spends at KLA, NCBA and KAA. She has served in leadership positions in all organizations and is currently vice chairman of NCBA’s Agriculture and Food Policy Committee. The speakers, interactions with others and educational programs at these meetings helps broaden her mind and makes her realize that it does matter what happens in other states and countries. She appreciates the opportunity to know her congressmen and understand our government.

Debbie is supportive of her children returning to Blythe Family Farms, with one son, Trenton, home full time already. In addition to working on the ranch, he has established a game bird hunting service. Debbie is an ardent blogger (see www.kidscowsandgrass.com) and writes directly to consumers who may never have been on a farm.

She is a nationally travelled public speaker, answering consumer questions and keeping legislators informed about agriculture. She was named the 2012 National Farm Mom of the Year for America’s Farmer Program. Having a son saved by a liver transplant, she is a strong supporter of organ donation, as well.

Younger daughter Amy also enrolled at KSU and majored in ag journalism. She and her husband, Karl, manage Lyons Angus Ranch, transitioning from Amy’s parents. They employ the latest genomic technology to provide enhanced EPDs on their bulls. Balanced traits are key to Lyons’ bull customers’ success. They will host their 30th annual bull sale in 2018, and are hoping to continue their 90 percent repeat buyer trend.

The couple appreciates the opportunity to see a wide spectrum of the cattle industry flow through their markets. They see firsthand the variety of needs the many entities of the cattle business has. Working with calf producers, backgrounders, feedlots and packers provides a well-rounded understanding of the industry. It also gives them an accurate reading of how well their ranch genetics are serving the needs of their bull customers.

The Langvardts have two sons; both are attending KSU. One son, Tanner, is pursuing a human healthcare career, and there are hopes for Trey to come back to the ranch. Mom reports him to be a “very good hand.”

Amy’s off-farm contribution is serving on the Kansas Foundation for Agriculture in the Classroom Board of Directors. She assists in writing lesson plans and teacher information, ensuring that agriculture is included in Kansas schools. For several years, she has served on the Frontier Farm Credit Nominating Committee, helping select the makeup of the local ag lending institution’s new board.

Because of their mom’s example, Debbie and Amy both work hard to mentor and encourage the next generation of ag leaders.

Both daughters are clearly proud of their mother. They are a well-spoken pair who makes it plain that they were raised with a good attitude and a better work ethic. It is clear that positive family values and a good example set by responsible parents are invaluable assets to our society. The Lyons family speaks well for our industry and the culture we cherish in Middle America.

Some of my favorite thoughts from Amy are:

“Cows really don’t care who puts the hay in the feeder or who is driving the feed truck. I followed her [Mom] around and was a tomboy.

“There is no glass ceiling in agriculture. You don’t get any accolades by padding your resume – you have to earn it with calluses on your hands. You can look at my mom’s hands and tell that she worked for a living.

“There is no men’s work or women’s work on a farm. There’s just work.”

“I am proud of my mom. By doing tough things, she makes me feel like I can do anything and be who I want to be.”

Kudos to you, Lyons family, and may we all learn a lesson about maintaining a good attitude.