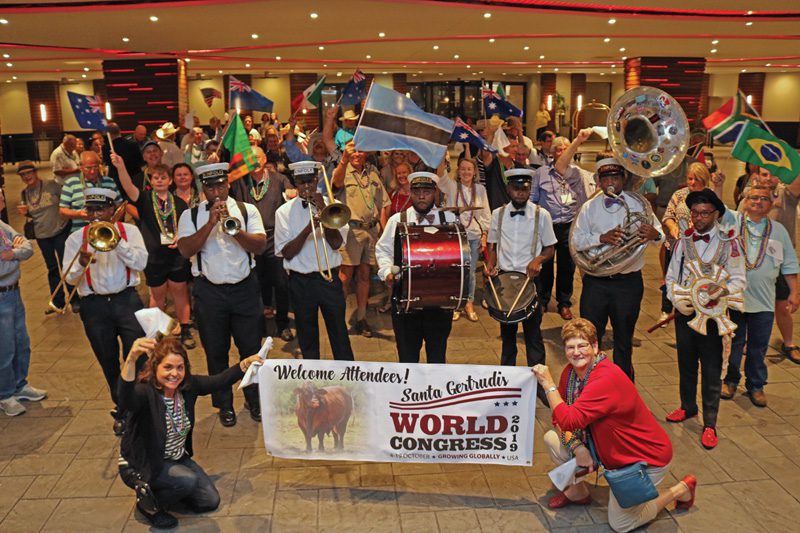 There has nearly always been prejudice against Bos indicus cattle. “They won’t grade. The quality isn’t there. They can’t handle the cold.” 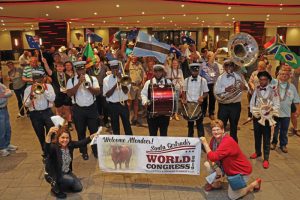 But with impressive feed-out results that would impress about any Bos taurus breed operator, Santa Gertrudis breeders can brag about EPDs that are “data-driven, and profit-proven.”

Its main business-related program was held in New Orleans, where dialogue on extensive development of high-quality genetics highlighted the event. National Cattlemen’s Beef Association (NCBA)President Jennifer Houston was among those who addressed the international group of producers.

She congratulated SGBI for its growth in recent years and outlined how the U.S. Beef Checkoff is helping domestic producers and feeders through beef promotion and marketing. She reminded U.S. producers that “no Checkoff funds” are used in financing NCBA policy activities.

“In 2013 we became the first breed association in the world to adopt single-step methodology to incorporate DNA into the breed’s genetic makeup,” he said. “Due to SGBI members utilizing the association’s selection-making genetic tools, SGBI caught the attention of the nation’s larger breeds, like the Red Angus Association of America (RAAA).

“RAAA initiated discussion with us on joint programming. RAAA has a very successful tagged feeder calf program in place. Collaborating with them will now allow us to develop a feeder calf marketing program.”

SGBI has worked steadily with what is now Neogen, a major genetic testing company, to develop DNA-based data on purebred Santa Gertrudis, F1 and Santa Gertrudis crosses. “You are rapidly moving your genetics process,” said Ashby Green of Neogen (formerly Livestock Genetic Services). “Data is what is delivering your proven process.”

Alfonzo Sanchez, whose family operates the Red Doc Ranch in Belen, N.M., had encouraging words for U.S. and international breeders. He pointed out the super feed-out numbers for cattle finished at Hereford Feedyard, part of AzTx Cattle Co., headquartered in Hereford, Texas.

In the research feed-out, purebred Santa Gertrudis steers representing 25 different sire groups were fed during the winter and spring of 2018 and harvested at Tyson in Amarillo, on June 29, 2018.

Data was collected by the Beef Carcass Research Center at West Texas A&M University in Canyon. At the bunk, the cattle had an ADG of 3.51 pounds per day. At the packer, they graded 96 percent Choice, with 51 percent hitting the Premium Choice mark.

“The data reveals that the Santa Gertrudis genetic package reaches desired Quality Grade targets and does so in an effective, efficient and profitable manner,” Sanchez said. He added that the steers’ average USDA Yield Grade (YG) was 2.98 with 50 percent of the carcasses scoring YG 1s and 2s. The data showed the steers had an average ribeye area 14 square inches.

Coping with the cold

The Utah trials were held across 14 counties. Some local ranchers balked at the program. Their prejudice against eared cattle was apparent. “But after viewing crossbred cattle in the feeding program, they realized the calves had no appearance of Brahman-influenced breeding,” Garcia said.

“In the recent feeding program, we didn’t lose one Santa Gertrudis-sired calf to freezing conditions, and we only lost three of the calves leading up to weaning.” But for Angus-sired calves, “11 were lost” in the cold Utah winter, Garcia added.

Brisket disease, or bovine pulmonary hypertension, has become a bigger problem in more mountainous areas. But not for eared cattle, Garcia said.

“We’ve never seen it in the Bos indicus cattle,” he said, noting that with that statistic and the powerful feed-out numbers, “the Santa Gertrudis breed has a huge opportunity” in crossbreeding programs in more northern states.

The Santa Gertrudis breed was established at the King Ranch® on the Texas Coastal Bend in 1920. It was the first breed developed in the U.S., and was created to handle the warm climate. So, of course the King Ranch was a stopping point on the World Congress tour, along with Texas A&M University and the State Fair of Texas Santa Gertrudis Show in Dallas.

Ford said SGBI’s rationale is based on the fact that “knowledgeable cattlemen recognize that no single breed holds a monopoly on superior carcass quality.

“Research results clearly indicate that genetic variation exists both between and within breeds for many important beef cattle performance measures. Simply stated, selection within breed populations is a very effective tool for improving carcass traits.”

The SGBI website notes that there are nearly 11,000 Santa Gertrudis genotypes on record with data to back up the breed’s claims, and that “Santa Gertrudis has earned its rightful place in the beef industry.”

“SGBI’s spirit of innovation, along with decades of solid data collection and partnerships with world-leading animal scientists, geneticists and service providers create a solid foundation for its predictable genetic evaluation.