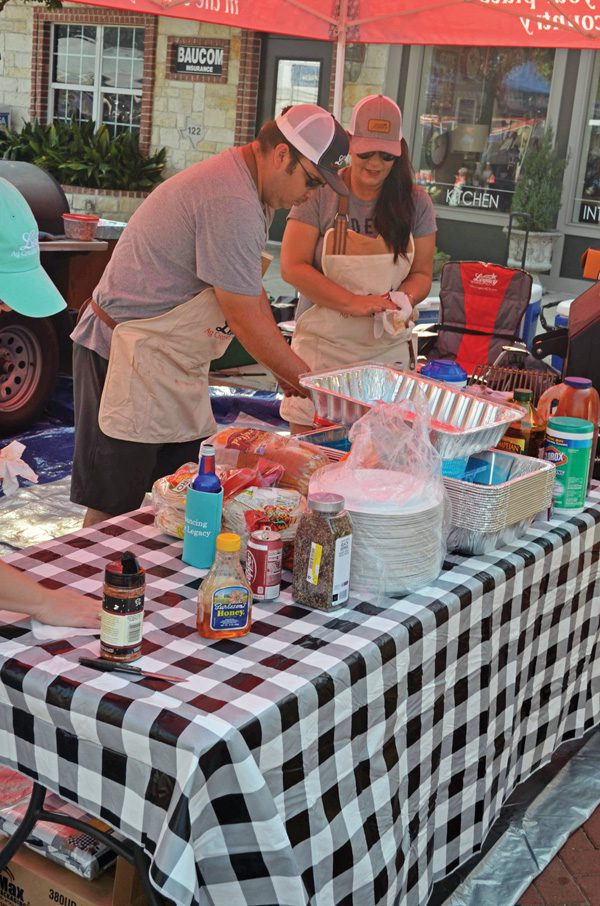 Several years ago, the Northeast Texas Beef Improvement Organization (NETBIO) Board of Directors was sitting around a table discussing the negative press cattle producers were receiving and the generally unfavorable attitude toward beef. Being a proactive bunch, they decided to venture into an area that was totally unfamiliar territory: educating consumers about beef and attempting to create a favorable impression with their product’s ultimate customers. The result was the Cattlemen’s Classic Ribeye Roundup, which held its fifth annual event Oct. 5, 2019, at Sulphur Springs, Texas. 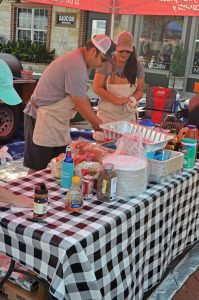 Teams began assembling at Sulphur Spring’s downtown square as early as 6:30 a.m., to set up their tents and cooking gear. Entries ranged from large trailers that held self-contained kitchens to regular backyard grills. By mid-morning, the smell of charcoal and woodfires permeated the air, as did the savory scents of cooking delicacies. The assembly of professional and backyard grillers soon had people stopping by to sample their tasty offerings.

The steak cooking was broken into two categories, one for professionals and one for amateurs. Each team sent a designated member to select their CAB steaks for the contest based on their place in a drawing. Careful attention was paid to marbling and other characteristics that contributed to the expected success of the entry. Steaks were then taken to the respective camps and cooked under watchful eye, hopefully to optimize results. Special seasonings were added to many entries, while others opted to let the beef itself delight the judges’ palates.

While many of the grillers chose to utilize the time-tested techniques of experience, others utilized optical thermometers to monitor the heat of the coals; stopwatches to time the amount of heat applied to each side; and meat thermometers to monitor internal temperatures. Each team knew that the beef would continue to cook for a short time while awaiting adjudication, so estimates of wait time were factored into the calculations.

The team of judges was sequestered at a nearby law firm where they awaited the entries’ arrival. Each offering was kept warm in a Styrofoam container until presented to the specially selected panel that first inspected the appearance of the entry and then, according to the prescribed rules, after slicing, how closely in appearance the steak appeared to meet the medium doneness standard. While the judges marked their scorecards, the entry was sliced into bites that were then presented for taste and tenderness evaluations.

Total scores were tallied and the top five entries in each category then cooked a second steak for the finale. The second round of judging determined the ultimate winners in each division – professional or amateur.

This year’s grand champion in the professional division was Seth’s Lake Fork Creek Steak and Seafood followed by Ben Spraggins Catering Services as reserve champion. In the open division, the winner was Ashley Sanders of the Smokehouse Rats team, followed by Joe Stump, also of Smokehouse Rats. This wasn’t the first time either of the top teams had won. Seth’s Lake Fork Creek Steak and Seafood won two years ago and went on, by special invitation, to come in runner-up at the World Steak Cooking Contest held in Gulf Shores, Ala.

Throughout the afternoon, crowds continued to grow and lawn chairs were soon planted in strategic spots throughout the square. Many of those arrivals were selecting ideal places from which to view the evening entertainment, musical artist Mike Ryan. Others were there to sample the hors d’oeuvres many cooking teams were handing out.

As the afternoon activities ramped up, to one side of the square Texas A&M AgriLife Extension, along with Texas Farm Bureau, Texas Cattlewomen, the Texas Beef Council, and local 4-H and FFA members held an educational awareness program designed to provide consumers with information about how beef is produced. Various tents included short talks, informational literature and signage pointing out the many benefits of cattle production beyond just the savory scents wafting across the venue.

One booth, sponsored by Circle E Western Wear, talked about products ranging from leather to cosmetics while the Karl Ebling family spoke of range management and benefits to wildlife and the environment in an area just across the pathway. The Texas Beef Council used a Wheel of Fortune apparatus to select questions about the nutritional aspects of beef for the gathering crowds. It was interesting to see that even cattle producers were unable to answer many of the questions completely and accurately.

Both 4-H and FFA students participated in the educational presentations, which covered topics ranging from confined cattle feeding to cow-calf operations. Those consumers who participated in the Cattle Trails educational offering had the opportunity to draw for various prizes ranging from gift certificates at local restaurants to t-shirts touting the benefits of cattle and eating beef. All in all, those who viewed the presentations indicated they were happy they participated and felt they learned something.

According to Dwyatt Bell, NETBIO chief operating officer, the purpose of the event is to foster a positive image of beef. It is important that those who consume this tasty, nutritious product understand the positive impact cattle have on the northeast Texas economy and that beef is both healthy and beneficial to the environment. He asserted that people need to see that, “We are involved in our communities and that we want to give back to those who consume our product.”

Later in the afternoon, many began gathering in a special area set aside for a wine-pairing demonstration. One of the local wineries provided samples of their offerings and discussed the merits of each as a complement to various cuts of beef. It was a great educational opportunity for those who like to partake of the fruits of the vine.

As 6:30 approached, the crowds swelled and lines formed for the steak dinner. The serving lines seemed to wind across the plaza, but moved quickly as 1,200 steaks, all cooked by the contest entrants, were served along with baked potato, salad, dessert and drinks. The atmosphere was one of a giant backyard party where old friends and neighbors laughed and enjoyed the beautiful fall evening on the square.

The nominal charge for the steak dinner was merely to cover the costs of the event. Local sponsors played a big part in making it affordable to almost anyone who was interested. The concert was free of charge. The goal was met of placing beef in the spotlight and the county designated a special day in honor of beef and those who produce it.

As the band played into the night and the crowd enjoyed the “Texas Red Dirt” music, the cooking teams packed up their camps and moved out. Another successful celebration of beef was in the books and plans are underway for next year.