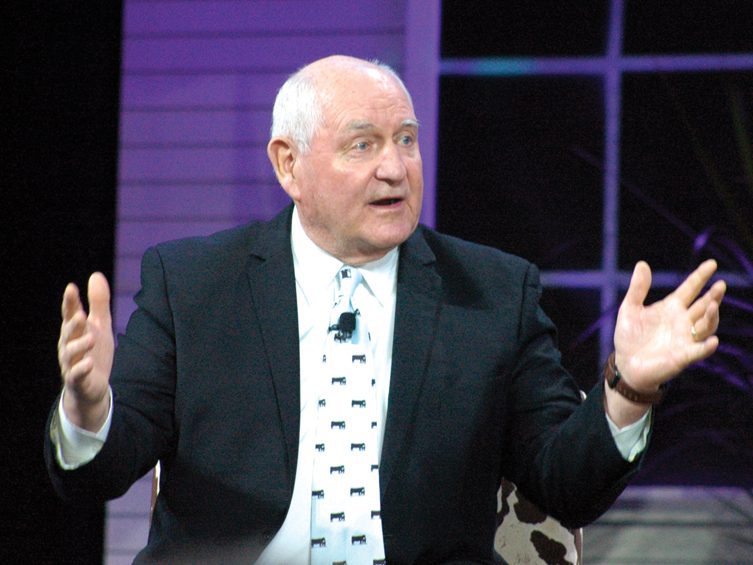 Ready to get his hands on a juicy, Texas-sized burger, Secretary of Agriculture Sonny Perdue provided a big helping of pro-beef news on trade and other issues during February’s Cattle Industry Convention and National Cattlemen’s Beef Association (NCBA) Trade Show in San Antonio.

Perdue and other USDA officials made the trek to The Alamo City along with about 8,000 others with beef in their hearts. He and others discussed issues in Washington, D.C., the Beef Checkoff, animal health and the persistent message that ranches, feeders and farmers need to continually tell their stories. 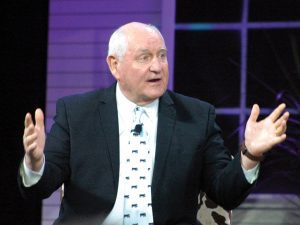 “We kind of gasped when the president [Donald Trump] said the TTP [Trans-Pacific Partnership] was bad. We wondered if he would validate that – and he has,” Perdue said, answering questions from NCBA President Jennifer Houston. “It’s not just [trade deals with] Canada, Mexico, China and Japan, there are numerous trade deals out there.”

Perdue noted that the outlook for 2020 includes challenges for producers. “There always will be challenges, but we have lived through them,” he said. “I’m bullish on agriculture in general. American agriculture is a miracle due to basic and applied research.”

While consumers sometimes complain about high food prices, Americans spend just about 6 percent of their disposable income on food, compared to 13 percent in France and much more in many other countries, Perdue said.

U.S. livestock and food production is taking place without hurting the environment. “Beef’s environmental footprint isn’t near as high as it used to be,” Perdue said. “We need to talk about it. We don’t have anything to be ashamed of. We have a social and moral responsibility to provide food for the world [with population growth expected to reach 9-10 billion people by 2050].”

He assured producers that USDA will do all it can to make sure “fake meat” is identified as just that, noting that he was a beef man through and through. “I’ll take a big juicy beef burger any day of the week,” he uttered with a big grin. “I’m a carnivore and will continue to be a carnivore.”

“It will be harder to get things done in Washington this year [due to the Presidential campaign],” said Ethan Lane, NCBA vice president of government affairs, part of an NCBA team that provided an update on association activities in the nation’s capital.

“The next few months are important to get things done. Regulatory work needs to be finalized by May [before the heart of the campaign begins].”

Lane said positive data that beef production has little impact on greenhouse gases is big in countering false claims by environmental activists that the beef industry and agriculture are hurting the planet.

“We can go on the offensive against the Green New Deal,” he explained. “We’re at a point where we don’t have a choice on whether or not to get engaged [in environmental discussions]. We have to get engaged.”

Allison Rivera, NCBA executive director of government affairs, gave pleasing information that there’s another year in delay of Electronic Logging Device (ELD) regulations for livestock haulers. Under proposed regulations, truckers would have to stop driving for potential safety reasons, even if their load of cattle would sit for hours without water or feed.

“We have another year of ELD delay until Sept. 30,” Rivera said. “Why are we still asking for a delay? We still don’t have flexibility in hours of service. The bigger issue is leaving more drive time on the road.

“We’re working with Farm Bureau and Livestock Marketing Association to convince members of Congress that we need more drive time.”

She said there are several bills in Congress that would add more miles and time to trucking back haul, including HR4919, the Responsible and Efficient Agriculture Destination Act.

“We need time on the back haul for unloading. It’s very simple.” She said, adding that there is bipartisan support for better ELD regulations for livestock haulers.

Rivera noted that safety is vital in livestock hauling, and “we have a really strong safety record” in cattle transports. “We will continue to ask for ELD delay and added flexibility in the back end of 150 air miles to 172 road miles or hours exemption,” she said, adding that legislation in HR4919 would provide these needs.

“It will give haulers either two to three hours of either drive time or unloading time. So if they were sitting in line at a feedlot or a plant, all of that time would be exempt under this language. We want to get Republicans and Democrats on board with that commonsense legislation.”

In an animal health matter, Rivera pointed out the readiness of the industry in the event of a major cattle disease outbreak. “Our goal in the 2018 Farm Bill was to create a robust foot and mouth disease [FMD] vaccine bank to protect our herds,” she said. “The hope is that there will be contracts in place the next few months.”

She said the goal is to have up to 30 million FMD vaccines contained in the vaccine bank, and that more money is available through USDA to fund a national animal health laboratory and further animal disease preparedness needs.

Another NCBA business affairs leader, Danielle Beck, put the issue of “fake meat” on the table. She said NCBA is pushing for passage of the Real Meat Act, introduced last fall in Congressional bills S3016 and HR 4881.

“It would require the word ‘imitation’ on every single fake meat product label,” Beck said. “The Impossible™ Burger and Beyond Beef® burger are trading on beef’s good name. But their CEOs want to put everybody in this room out of business.”

“Beef has one ingredient. Impossible has 22. Beyond has about 18. About 44 percent thought plant-based had less sodium. But sodium levels are 220 to 620 percent higher in plant-based products. It’s pretty absurd.

Fifth-generation Florida rancher Marty Smith was elected NCBA president for 2020. His family operates Smith Brothers-Wacahoota, LLC, a cow-calf operation in central Florida that has been in continuous operation since 1852.

He replaces Jennifer Houston of Sweetwater, Tenn. She represented the industry well in her thousands of miles of travel to and from cattle associations from coast to coast. She also was key in helping the beef industry open new trade pacts for U.S. beef worldwide. Smith was formally elected at the convention’s NCBAs Board of Directors meeting. Jerry Bohn of Kansas was named president-elect and Don Schiefelbein of Minnesota was elected vice president.

His message centered on the importance of teamwork in any task, from raising a few calves to walking in space. “The sky is not the limit,” he said. “If we can dream it, we can do it.”

The 2021 Cattle Industry Convention and NCBA Trade Show is set for Nashville, Tenn. So have you dancing boots ready for Music City.