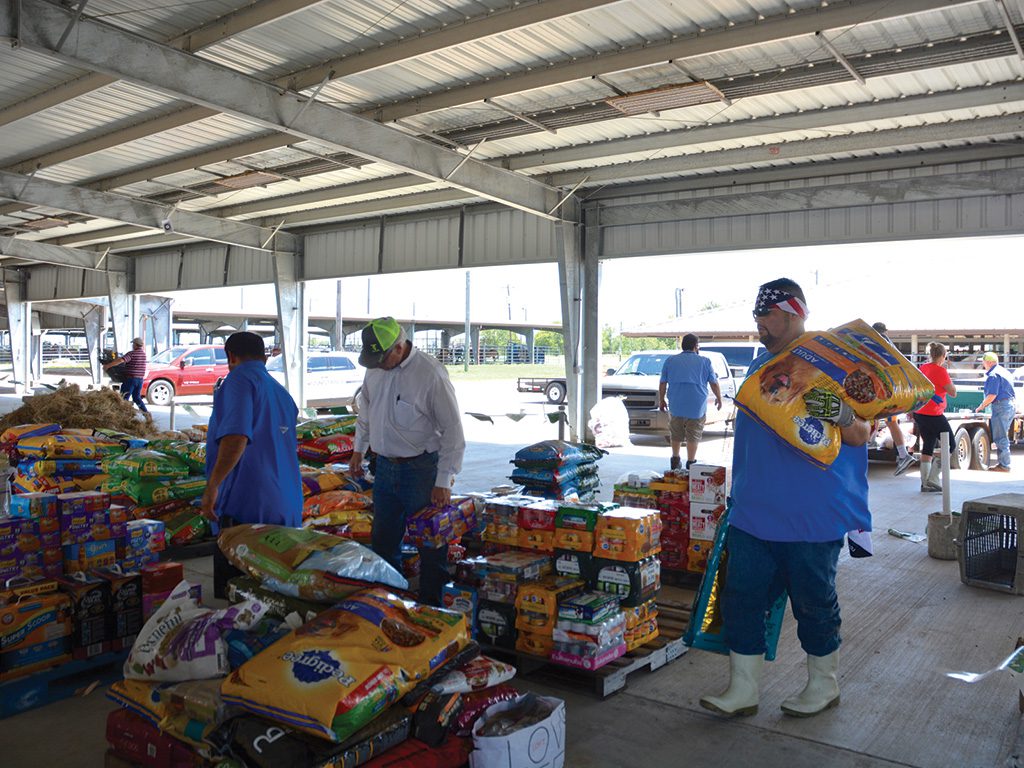 Joe Paschal was still catching his breath at his Corpus Christi office on Sept. 12. He deserved a breather. The beef cattle specialist for Texas A&M AgriLife Extension was and remains part of a dedicated team that virtually dropped everything to try and save cattle when the biggest storm in a dozen years slammed the Texas coast. That’s what cow people, and those who count on them for their livelihood, do when livestock are in danger.

Hurricane Harvey turned southeast Texas agriculture upside down on Aug. 25 when its wall of water, 125 mph winds and eventually up to 50 inches of rain spared no city or town in its path. From just north and east of Corpus, up to Houston and later into Louisiana, Harvey wiped out cotton fields and modules, good rice crops, damaged gins and other ag industries – and forced many cattle to swim for their lives.

Of course, human lives were the most important concern. Upwards of 60 people perished as a result of Harvey. Still, loss of cattle, horses, other livestock, and farm and ranch dwellings and equipment also needed attention.

Paschal and numerous other AgriLife personnel feared the worst as they reached numbed producers to help find cattle in pastures cutoff by flooding. After all, the region is part of the nation’s largest beef cow region, with some 1.2 million head.

Airboats, helicopters and likely many from the now-heralded Cajun Navy helped ranchers venture into pastures-turned-lakes in hopes of finding their herds on high ground. National news networks had plenty of footage of cattle walking in neck high water being driven by cowboys on horseback. More than one cow was seen being helped out of deep water.

Dave Anderson, AgriLife Extension livestock economist, reminded this writer, “Cattle are smarter than some people think. They can find higher ground when possible.”

“It’s hard to determine how many cattle died from the storm,” Paschal says. “But I think a ballpark figure is in the low thousands.

“We figure most were calves that drowned. But there will also be some cow losses because of flooding. A lot of people were able to get their cattle out. But even though the death losses are probably lower than we feared, for those producers who lost part or all of their herds, it’s the worst kind of economic disaster.”

About 1,000 or more strays and horses were being held in holding pens and barns in mid-September. They were fed and provided health care by Extension personnel and hundreds of volunteers. Unfortunately, a lot of those cattle can’t be returned to their home pasture.

“We’ve found a lot of cattle that are mixed up and not identifiable,” Paschal says. “That’s a problem every time we have a storm. There are no brands or no ear tags. They may come from two or three counties away. Some cattle won’t go back to their owners.”

Plenty of hay and feed were available for stranded cattle two weeks after the storm hit. But it took a while to literally wade through the mess to get supplies delivered. He says Harvey’s damage and destruction of barns, shed, shops, fencing, equipment and homes is probably more pressing.

“A lot of ranches had their barns heavily damaged by wind and flooding,” Paschal says. “Producers lost a lot of feed supplies.”

Along with AgriLife Extension and Research personnel from across Texas, the joint emergency response effort included men and women from the USDA, numerous other government agencies and organizations, farm and ranch associations, and private veterinarians, nutritionists, farmers, ranchers and cowboys.

The Texas Animal Health Commission (TAHC) continues to play a big part in the relief efforts. TAHC officials say animal emergency response efforts continue to be a team effort in the aftermath of Harvey. With many areas still inaccessible due to high water, support is coming from a variety of sources and locations.

“Due to water too deep to access livestock by truck and water too shallow to reach animals by boat, we must be resourceful,” says Dr. Andy Schwartz, TAHC executive director. TAHC partnered with the USDA’s Animal Plant Health Inspection Service (APHIS) Wildlife Services (WS) to conduct livestock needs assessments via helicopters and fixed winged aircraft.

When needs cannot be met by boat or vehicle, the Texas Army National Guard has flown in and air dropped hay to livestock marooned by floodwaters.

Paschal says AgriLife Extension helped develop an emergency response protocol following Hurricane Rita. “We have 12 different AgriLife districts across the state,” he says. “Each district has a strike team of four to six agents. They set up livestock supply points where there is a disaster.”

The AgriLife response teams worked directly with other personnel to get ranchers what they needed.

With so much attention paid to the huge losses in Houston, there has been concern that rural areas hit by Harvey would be left behind. To help assure farm and ranch operators receive help, Texas Farm Bureau established a Hurricane Harvey Relief Fund. According to the TFB website, funds are available to:

According to TFB officials, “100 percent of the donations collected will be dispersed via an application process directly to farmers and ranchers located in counties that have been designated as disaster areas by the federal government.” Contributions to the fund are tax deductible. If you have monetary donation questions, contact Janice Neckar at jneckar@txfb.org or 254-751-2494.