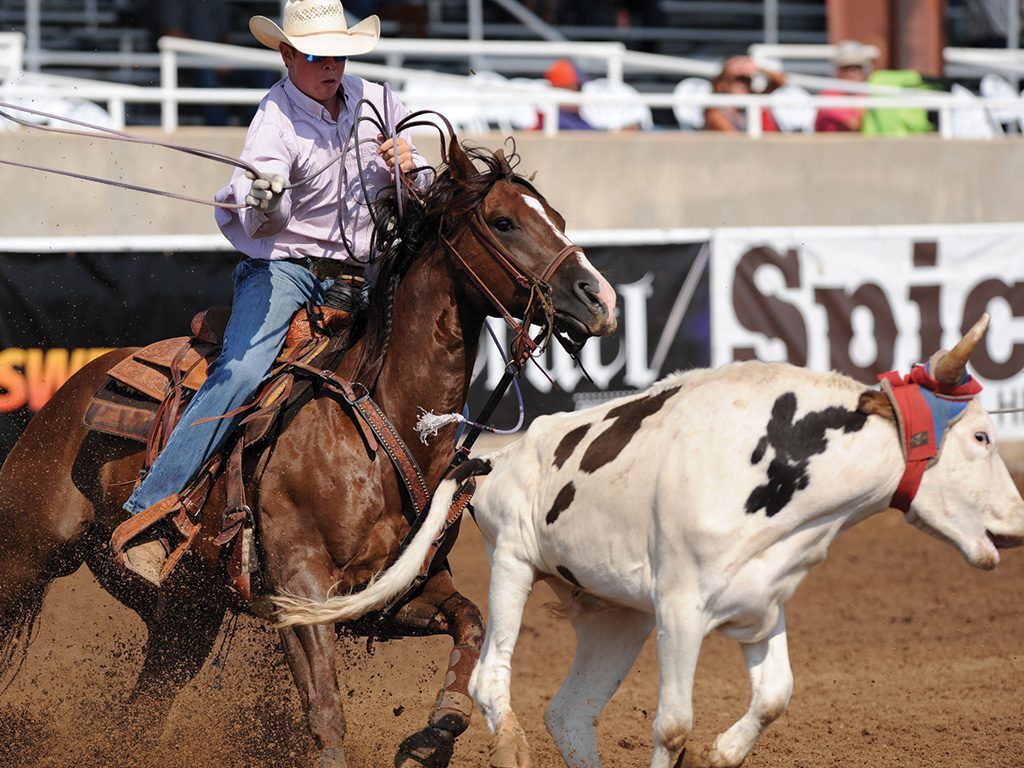 Opportunities abounded this year to make a difference in the lives of numerous young people at the 2017 Spicer Gripp Memorial Roping in Hereford, Texas. Skills in areas such as organization, mathematics, delegation, communication and teamwork are taught as area young people are encouraged to work alongside the directors of the event.

“Growing up Gripp” is an experience open to everyone, but only a lucky few truly know the heartfelt meaning behind the statement. Following their parents from the day they were born and absorbing knowledge along the way while organizing and producing one of the premier roping events in the western industry, the next generation is coached on numerous skills while they hang around the Spicer Gripp Memorial Roping.

Named for a man generous with his time and knowledge, especially when the area’s youth showed the need for assistance, Spicer Gripp continues to spread his good will across the Panhandle of Texas through the Foundation & Memorial Roping named in his honor. He led by example, communicating face to face with kind words, building a solid foundation for the development of confident and contributing adults.

With the passing of time things change; however, there is always a need for the basics of life. The Spicer Gripp Memorial Youth Foundation keeps the lessons Spicer taught himself alive while supporting kids interested in agriculture.

By volunteering to work at the event itself, these kids also learn the other lessons about responsibility, honesty, perseverance, good character and the like, blending the old with the new and creating a continuously successful agricultural industry.

New to the Lineup

New to the lineup of the Spicer Gripp Memorial this year was the Junior NFR Qualifier. Hereford Vet Clinic & Supply and Moss Family, Inc. co-sponsored the team roping consisting of two age groups of ropers – 15 & Under and 16-19. Kellan Johnson from Casper, Wyo., partnered up with True Lacina, a local roper from the Texas Panhandle, dominating the 16-19 age group. The top 15 in the standings will have the opportunity to compete at the Junior Team Roping Finals to be held in Las Vegas in conjunction with the PRCA’s National Finals Rodeo in December.

Spencer Clements and Kayden Little bested 59 other teams in the 15 & under age division of the Junior NFR Qualifier.

Numerous steer ropers turned out for the Invitational Steer Roping sponsored by BJM Sales & Service. Three rounds were held to determine the top 12 ropers who would return to compete in the short go on Sunday.

The ladies ride in

A new sponsor joined Lone Star Ropes this year in supporting the Ladies Breakaway Roping. With the support of Outlaw Spirit, the total payout was $31,900. The ladies roped two calves on Friday and the top twelve fastest total times on those two calves decided who came back to rope on Sunday.

Rylea Rae was the big winner, finishing first in the short round with a time of 3.71 seconds on her final calf and first in the average with a total time of 11.15 seconds on three calves.

After a wonderful evening dancing to the epic sounds produced by Jake Hooker & The Outsiders along with a couple special friends, the calf ropers had their turn to perform in front of the grandstands in Hereford, Texas. Mobile Veterinary Practice & Arthrodynamics are longtime sponsors of the Invitational Calf Roping at the Spicer Gripp and with their assistance, the total payout for the event in 2017 was $62,000.

Caleb Smidt needed a time of 16.65 seconds or faster to move to first in the average and win the roping. Caleb tied his final calf in 10 seconds flat. His horse “Iron” was recognized as the Top Horse of the event.

Roping for the reward of giving

Willie Eldridge and a professional roper from the local area Jaytin McCright stopped the clock in the first round at 7.49 seconds for first in the amateur heading division.

After having a rough ride in the first round Johnny Trotter collected himself and made two more good runs with professional roper Kollin Von Ahn. The team’s total time on three steers was 24.38 seconds.

The smell of barbeque drifted across the arena allowed contestants and spectators plenty of time following the close of the Texas Feed Fat Pro Am Team Roping to wander down and enjoy the beef cooking contest. This year’s Spicer Gripp Beef Capital of the World Barbeque Cookoff paid out $1,700. The winner of the steak division was Tipsy Gipsy BBQ. South Fork won the best ribs competition. Top honors for brisket went to Your Right Barbeque. Texas Feed Fat was selected as the People’s Choice, and the Grand Champion title went to Crist Fuel.

The contestants pay $1,000 each or $2,000 per team to compete in the Whiteface Ford Open Team Roping at the Spicer Gripp Memorial. Whiteface Ford not only picks up the tab for the stock charge but also throws another $30,000 in the pot for good measure.

Lane Ivy and Buddy Hawkins bested everyone in the average with 43.16 seconds on six steers.

An environment of education

Unintentionally, the Spicer Gripp Memorial Roping has become much more than a premier event in the roping industry. The event and everything surrounding it have evolved into an environment for education. Kids too young to have known Spicer Gripp are still absorbing the advice he provided as it is handed down by those with the privilege of sharing time with him while he was on this earth. With an atmosphere of loving and cherishing the Spicer Gripp Memorial is best experienced in person so make plans now for the first weekend in August of 2018.[/fusion_text][/fusion_builder_column][/fusion_builder_row][/fusion_builder_container]