The Ahlquist and Ebert Families Threading the Needle 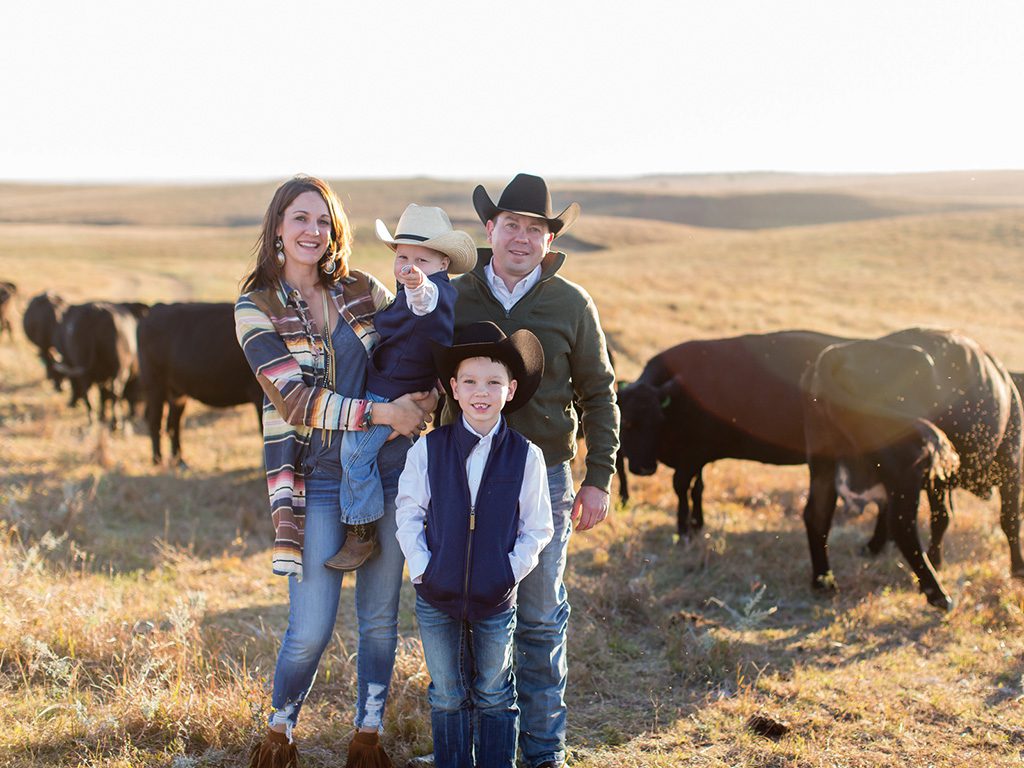 Most farmers and ranchers who have navigated the stormy waters of generational transition will tell you it’s like threading a needle in a dark room – very difficult, with the likelihood of getting hurt.

Many of the older generation find it so unpleasant that they simply refuse to deal with continuation of their legacy. Some, however, take the challenge and brave the personal, legal and financial risks to ensure their way of life reaches into the future. Kudos go to an Ottawa County, Kan., family who is deep into the intergenerational leap.

Frank and Linda Ahlquist of Tescott, Kan., are working their way through the maze, providing both farming and ranching opportunities for their children and grandchildren. I spoke with Jess Ebert, the younger Ahlquist daughter, on a frigid day just after Christmas, when the mercury rose to only two degrees. Not surprisingly, she was the only one available to talk; all other family members were needed outside to deal with frozen cattle waters and winter misery.

Although succession is well on its way, Ebert explained that it’s an ongoing process. While her parents are gradually backing away from day-to-day management, they’re still available and active, remaining on one of the three homesteads that make up the Ahlquist/Ebert business.

The three family units are separate, yet together. Ebert explained that her brother, Jon, is managing the farming operations, while Jess and her husband, Levi Ebert, are managing the cows.

Each entity owns and rents their own land, and each owns their own cows. The cattle, however, are run together year round. After calving, the family employs an intensive grazing system, rotating through the grass in the Smoky Hills near Tescott.

Thinking out of the box

The Eberts use a non-traditional method of adding value to their stock; their spring-calving cows are used as recipients in a commercial embryo transfer service. Herds taking advantage of the Eberts’ work are Hoffman Herefords of Thedford, Neb., and Altenburg Super Baldy Simmentals of Fort Collins, Colo. This is the ninth year that the Ahlquist and Ebert cows have been included in a commercial embryo transfer program. According to Jess, the service provides a premium over traditionally raised calves.

Labor is intense and the technique critical, but it’s this kind of commitment that ensures adequate income for the family business to survive financially. Levi’s expertise in artificial insemination (AI) and heat synchronization comes from years of working fulltime for an AI company until 2015.

The couple provides AI and heat synchronization services for area herds, as well. Most of their assignments are done in the spring, while the family maintains a herd of fall calvers that require winter AI service. The Eberts consider the dependable genetics available through AI technology a great asset to their replacement stock.

The operation’s cow herd includes commercial black, Red Angus and Simangus. Jess stressed they would like to expand until numbers provide enough income for continued growth, and off-farm income is not needed.

On nearly every successful family operation I’ve encountered, most individuals have jobs off the ranch. This takes an unexplainable wellspring of ambition and selflessness. Linda Ahlquist drives a school bus twice daily. Jon Ahlquist works as a salesman for Crop Service, a local fertilizer company. Jess Ebert is the national sales manager for CALF News, and Levi Ebert is a regional salesman for Stay-Tuff Fencing Company. He and Jess are also AI technicians and heat synchronization specialists for Select Sires. Only Frank Ahlquist has escaped the off-farm duty; he is the official Senior Member, Grandpa and Operations Adviser.

All family members help where needed, be it with field work, calving, cooking or fencing. One notable phone call I made to Jess last summer found her in the combine, harvesting wheat. Many meals are taken together, giving the crew ample opportunity to discuss every aspect of the business.

As in most families, the elder Ahlquists have one daughter, Jeanne, who chose not to come back to the operation. She’s a teacher in nearby Tescott.

The Eberts have been heading back to the ranch since they can remember. Jess has always planned on it, and has always known that it would take a great deal of effort financially. She is a graduate of Fort Hayes State University with an ag business degree. Levi graduated from the University of Tennessee with a degree in animal science.

Levi’s Manhattan, Kan., roots were no help to the newlyweds; they found land there too expensive, so they set their sights on Ottawa County. The pair began their generational transition, purchasing land as near the Ahlquist establishment as possible. Aggressively pursuing expansion, they have purchased three pieces of grass, the last two being adjacent to the Ahlquist home place.

Jess has found that older couples with no children interested in coming back to the ranch are a valuable a resource, as well. She encourages aspiring farmers and ranchers to continue their education and network with other bright, likeminded peers.

The Eberts’ future solidly involves family. Aside from her goal to increase cow numbers and land, Jess wants to work with her brother to incorporate cover crops and grazeable acreage on his farm ground. Possibilities abound when discussing alternative uses of cropland and grazing options. The whole picture bends toward a more efficient cow unit with lower feed expense, less depreciable machinery and less stress of dependence on fickle row crop markets.

She added that family discussions across the dinner table now include the possibility of adding goats to improve pasture species and control buckbrush. Open-minded ideas like these result from the quest to increase sustainability and become better stewards of the land.

Levi gives credit to the network of farsighted people they’ve met and worked with who’ve been a huge asset.

The thought Linda Ahlquist wants to share reflects the “awesome way of life” they are lucky to live; however, it’s overshadowed by the fact that it’s “getting harder to make ends meet.”

Ultimately, the Eberts will pursue passing down their operation to their two sons, Ty, seven, and Mason, three. An ultimate goal is to leave a legacy that their children will want to continue and, someday, pass down to their children.

This is a family that clearly respects one another, their individual abilities and talents, and are clear minded enough to be flexible when the need presents itself. That is a recipe for success.