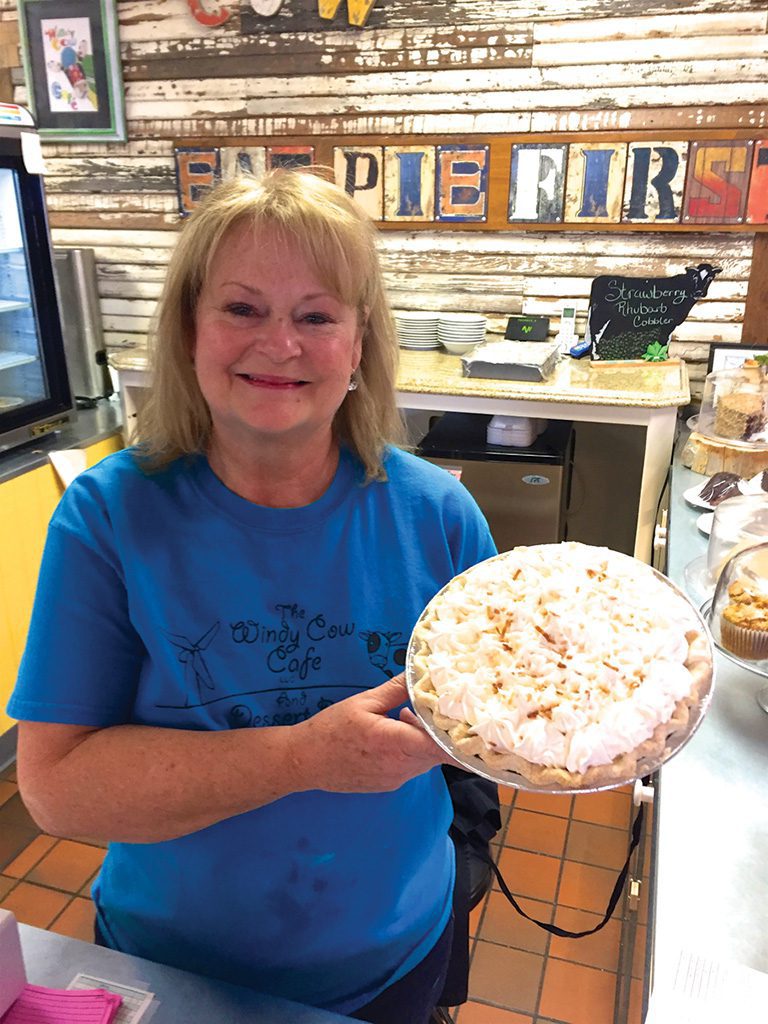 Pen riders are as independent as any ranch cowboy. Probably more so. But there’s one thing nearly all of  them have in common – not much beats a good chicken fry at bean time.

If they’re riding pens west of Amarillo at the Tascosa, Kirkland or Quality feedyards, they likely wind up at The Windy Cow Café in Wildorado, Texas. Named after the region’s recent ventures into wind energy, along with its cattle feeding and ranching heritage, the café has become popular for lunch and dinner for cowboys, farmers and city slickers from town.

My wife, Debby, and I have learned it’s a prime place for chicken-fried steak, half-pound burgers, ribeyes and catfish. And if you eat without having dessert, your meal is far from complete.

Diana Donavan owns The Windy Cow. She worked there years ago when it was known as Jesse’s, which itself served up great cowboy cuisine in the ‘80s and ‘90s.

“Jesse Fincher owned it back then,” Diana says. “After being closed for several years, the café eventually came up for auction. I had a dream to own my own restaurant. It was good timing and I bought it.”

Her husband works in the wind energy business, so they had a natural name for the eatery. When it opened a few years ago, the locals poured in for lunch and dinner specials. Word quickly spread to Amarillo, about 30 miles east on Interstate 40, or “Route 66” to tourists.

Now, guests range from those hungry cowboys and area farmers, to town folk. “We’ve become a meeting point for people from nearby Vega, Hereford, Amarillo and other Panhandle cities and towns,” Diana says.

“Every day we have a special. The chicken-fried steak is always popular, along with our burgers. We also serve ribeyes and sirloins, beef stew with cornbread and all-you-can-eat catfish Fridays and Saturdays.”

While visiting with Diana, she held up a coconut cream pie. “I had a coffee shop before and also made homemade pastries, cakes and pies,” she says. “Jesse was also known for his pies, and people would stop off I-40 just for his pie. We’ve also developed return-traveler customers who make it a point to visit us for a piece of pie.”

I’ll argue with that, but Diana’s desserts are as good as any you’ll find at your favorite restaurant.

The décor is straight country. Iced tea is the usual beverage. But Lone Star, Shiner, Coors and Bud are also available, along with wine.

Despite the delicious baked goods and beverages, the chicken fry and Windy Cow burger are the best draw.

Any local pen rider will attest to that.