A Fresh Look At a Successful Transition 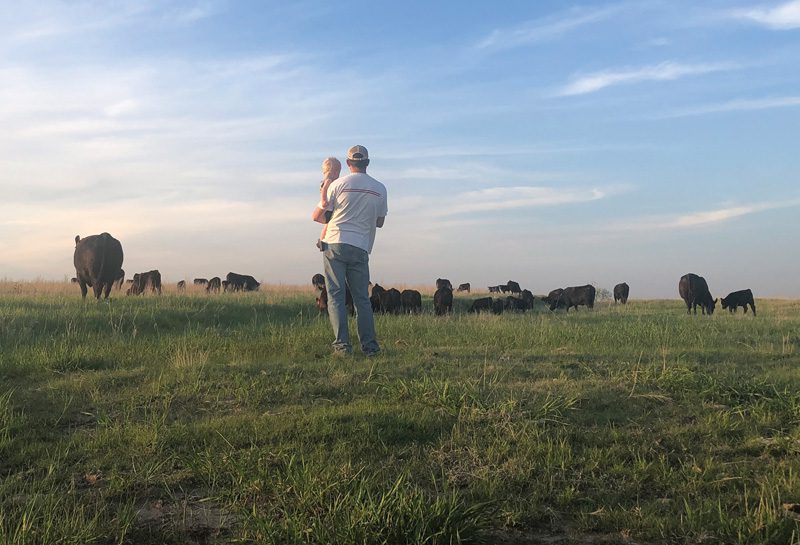 The Ostrand Angus story is a blend of old and new, of family and one person’s faith in another’s integrity. It’s a refreshing look at how things can work out when people open their minds to new ideas.

Kory Ostrand was born and raised on the family ranch south of Ansley, Neb. He is a product of pioneers who homesteaded in Custer County. August and Caroline Ostrand emigrated from Sweden in 1884 to settle the original homestead. It still serves as the hub of the family operation and home to Kory’s parents, aunt and grandmother.

The family is smart enough to know that change is an inevitable key to survival. Neil, Kory’s father, raised purebred Duroc hogs for years, hosting an annual production sale. His reputation herd was sadly dispersed when the hog market tanked in the 1990s and his customer base disappeared. Kory says he worked many hours in the swine facility as a youth. Despite learning a great deal, the hogs were very labor intensive. He says he “endured them.”

Kory, however, embarked on a different route. When he was still only a sprout, the youngster saved his money from 4-H projects until he had squirreled enough away to buy a registered Angus heifer when he was nine years old. He repeated his method over and over until he had put together a nice group of cows. The single-minded vision of a young boy turned into a sizeable herd for a man and his family.

Today, the commercial and registered Angus cows are run separately, but haying, farming and machinery are kept as one unit between father and son.

The two herds complement one another. Angus-sired commercial calves are retained on an adjoining site and finished. Genetics from Kory’s herd have contributed to the quality of these fed cattle. The younger Ostrand says they are worth more when they’re eligible for the Certified Angus Beef® (CAB) Program.

Additionally, individual carcass data is collected on the steer mates to bulls coming out of the purebred operation; these are fed alongside the commercial cattle at the same location. The family wants to assure they are producing quality genetics from ranch to rail. The operation retains and feeds 900 head annually at their feedlot.

By the time he was in junior high, Kory had built his herd numbers adequately to host his own bull sale. Held at Huss Auction in Kearney, it remained there for 12 years. He continued his mission to be a breeder through college, attending Southeast Community College in Beatrice and graduating with an animal science degree in 2005. Very pleased with his education there, the young breeder also learned artificial insemination (AI) and interned with Rishel Angus at North Platte.

Kory married Danielle Bochart in 2008 and as they started their family, the cow herd numbered 80 head. Through these growing years, he has done an admirable job with the cattle. Considering his youth, it was a remarkable accomplishment. Anyone can see that he is a committed talent, hell bent on being successful, determined to do things right. Kory is flush with integrity.

This quality was not lost on Sargent Angus breeder Mark Slagle. The long-established seedstock producer didn’t know Kory from Adam, but spotted the youth at one of his bull sales in Kearney and knew a good man when he saw one. Slagle was looking for a change in his life and wanted to disperse his herd. Nearly any older rancher with financial security could have walked in and made a deal, but Slagle had seen the young Ostrand and was impressed. He decided to do something meaningful. One evening, Kory got a phone call; Slagle was offering to sell him his nationally recognized cow herd.

Out of the blue

The call frankly scared the young rancher. It was a dry year. The purchase would incur some debt. How would they manage? After a short while to think, Kory called Slagle back to turn him down. No one answered the phone; providence had intervened.

Danielle questioned why he would pass on this once-in-a-lifetime opportunity. The next day, Kory called Slagle again, and when the Sandhills rancher answered his phone, the two made a deal. Family was instrumental in getting the plan to work, to cope with the drought and move the transition forward. Their registered Angus herd now numbers 375 head.

Slagles have continued to support the younger family with advice and customer service, sale management and friendship. Kory’s annual sale is now held at Slagle’s sale facility near Sargent.

Sadly, Mark Slagle suffered a malignant brain tumor and passed away earlier this year. His wife and four daughters remain close to Kory and Danielle. A strong bond between the two families confirms the Slagles’ good judgement in selecting Kory to take over their legacy.

Taking the herd into the future, Kory is most intent on maintaining cow numbers. He does his own AI work, and they calve their own stock. Keeping 80 head of replacement females each year is important, as the Slagle cows eventually age out. The family is “maxed out” on labor, creating an additional factor in future decisions.

It is fortunate that the couple enjoys being outside and physically working. Kory notes he was glad to have gone to college and had time away from home to realize and confirm his decision to go into production agriculture. No matter how difficult, he knows it was the right choice.

The family plans to continue to raise their children and cattle in the tradition of the family legacy. The Ostrand offspring are the sixth generation on the ranch. They also look forward to beginning 4-H with their kids where, it is reported, Kory will be in charge.

In a time when some producers are downsizing their cows, these cattle remain big. Cows may weigh an average of 1,550 pounds with much of this influence coming from the Slagle purchase. The Ostrands’ client base are people who want extra frame size, and their team is there to provide a product that is increasingly difficult to find. Care is taken to afford the added growth without sacrificing muscle and longevity.

The family sells all of their bulls via an annual production sale as well as by private treaty in late spring, and they collect semen from top-end herd sires for in-herd use, although they do sell some privately. A goal for the operation is to be able to place a sire in a bull stud for public semen sales, one that can garner name recognition for the young herd.

Kory’s first priority remains his commercial customers. He delivers most bulls personally and makes a point to spend some time at each stop, finding out the needs of his seedstock clients.

‘It’s not for everyone’

The young family numbers four bright children ages seven to 16 months. They often find themselves working together on horseback, a skill that is not an option on a Custer County ranch and one that carries on their family history. Danielle rides too, when horses aren’t taken by the children, and spends a considerable amount of time being Kory’s right hand at ranch work. It goes without saying that raising youngsters takes an enormous amount of time. She also enjoys gardening and canning.

Kory warns that what they do is extremely demanding at calving and AI time. Despite this fact, there’s nothing else he’d rather do, it’s their lifestyle.

“You’re the furthest thing from an eight-to-five worker that there is. Live it or you will never be successful,” Kory says. “[I want to] raise my family and show them the way of life we live. Hopefully they will pass that on to the next generation.”

Kory leans on his faith through the ups and downs of life. “If God brings you to it, he will bring you through it. I’ve seen it play out and be real several times.”