Backgrounding: The Way to Go 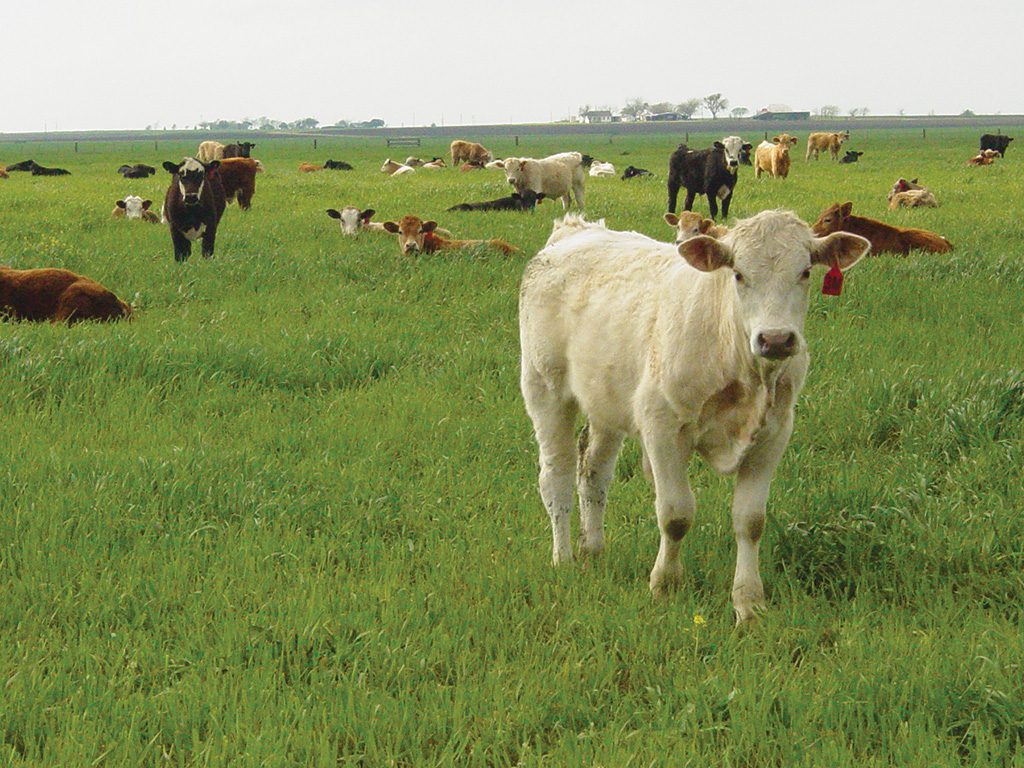 Backgrounding is proving to be the way to go for some. Many feedyards pay top dollar for calves that have had quality feed or pasture, a mineral program that includes trace minerals, and been vaccinated. Sure, it takes more time and handling; however it’s an investment in the animal’s productivity and genetic potential. Plus, backgrounded calves tend to be healthier and more efficient. They feed better and are more likely to have a higher carcass grade.

Will Simpson owns S4 Cattle, an order buying company, and works in conjunction with his family’s businesses, Simpson Feedyard and Simpson Ranch, near San Angelo, Texas. He backgrounds his family-owned cattle and those he buys. As soon as cattle arrive from the sale barn, they receive water, feed and rest. It takes from 24 to 72 hours before they’re processed and moved to their home pen. Bull calves are castrated, and all calves receive ear tags, implants and vaccinations.

“I see a lot of cattle that only have a seven-way Blackleg shot,” Simpson says. “If those cattle can have at least one round of five-way viral (two is better), and a Pasteurella shot prior to reaching the facility, their success rate goes way up. Calves that do get sick respond to treatment significantly better. At the end, the cost to gain is significantly reduced, especially in the fall.”

He also gives every processed calf the PI test to check for animals that carry Bovine Viral Diarrhea. He sends an ear notch from each animal for testing. Simpson immediately isolates any calf that is PI positive; it may be symptom free, but it can infect the rest of the herd.

Backgrounded calves also receive a feed program that includes minerals. Simpson is a fan of injectable minerals, which contain copper, selenium, zinc and manganese to enhance cattle immunity and productivity. Simpson does not usually mass treat with antibiotics up front, preferring to delay treatment.

“We use low-stress management,” Simpson explains. “Cattle have exposure [to bacteria and viruses] coming through the sale barn. When you combine exposure and stress, that’s when they get sick. We handle cattle calmly and slowly, to minimize their stress.”

Marc Gigot is part owner in family-owned Circle Land and Cattle Corporation near Garden City, Kan., where they grow alfalfa, triticale, corn and grain sorghum — all used to feed cattle. They also run a dairy heifer replacement facility, as well as a beef cattle backgrounding business. Beef calves arrive at their backgrounding operation weighing 400 pounds, moving to the feedyard when they reach 800 pounds.

“We have found backgrounding is a huge part of being able to feed out properly,” Gigot explains.

“Calves gain better, finish better and are ready faster. They are bulletproof by the time they get to the feedyard because [undesirable cattle] have been weeded out.”

Gigot places new calves on a high-roughage, low-energy diet, which promotes a 2.5-pound daily gain. If they gain more than that, they put on fat, an undesirable development. Gigot works to get them in the best position for the feedyard to take over and “pour the coals to them.”

Utilizing low-stress handling techniques, calves are placed in a pen where they learn about electric fences, which are erected inside. They also discover how to eat from a bunk, even if they graze in a pasture later. Incoming calves receive vaccinations and a PI test. Calves testing positive move to quarantine pens at a different feedlot.

The forage diet is dry alfalfa, straw and stalks mixed with wet distiller’s grains. Later calves will move to heavily ensiled silage, triticale, corn silage, corn earlage and sorghum feed. Circle Land and Cattle provides minerals, and a nutritionist composes rations according to various crops grown on the farm, as well as energy needed to balance the diet.

“Educate yourself,” Gigot advises. “Use a nutritionist and constantly test feed and rations, especially if you’re buying from different producers. Consistency is key. Changing rations at the drop of a hat alters gain rates just like it does in the big feedyard. Be consistent in everything you do.”

Jay Cortese, cattle procurement manager for Friona Industries, buys only backgrounded cattle from savvy producers located throughout the U.S. He prefers to buy calves that have been weaned at least 60-75 days and have had a minimum of two rounds of modified-live virus vaccinations.

“Every calf that comes into our finishing yards has been backgrounded in some way, shape or form,” Cortese explains. “We don’t take any high-risk calves, any calves off the cow or calves directly out of the sale barn.”

Although Cortese doesn’t require calves to be bunk broke, it is a good skill to have. All males must be castrated. In addition, he likes to know what kind of ration animals are eating. If they have been on grass with some supplementation, then Cortese knows he cannot be as aggressive moving those cattle up to the finish ration. Feedyard managers have to bring them along slowly, to avoid any feed-related issues or other health problems. Animals that have been in a backgrounding yard are accustomed to a ration with some corn or starch and are usually placed on a finish ration sooner.

Cortese also prefers to receive as much health procedure data as possible on each animal, such as which vaccinations were given, and which medicines were used in the producer’s treatment regimen. This information is necessary for the feedyard manager to know if cattle were wormed and if so, which dewormer was administered.

Comprehensive health information from producers enables feedyard personnel to fully manage each animal. This attention to detail prevents duplicating treatment with additional doses of antibiotics. Feedyard health care professionals also have a better idea how to treat that calf if it becomes ill.

Most of the backgrounded cattle that arrive in any of the six main Friona Industries’ feedyards range between 6-10 months old. Older calves arriving from a grazing scenario run between 12-15 months old. Weights vary from 550-800 pounds.

The receiving process for new animals is crucial. When cattle arrive at the feedyard after a long haul, feedyard workers typically wait 24 hours to process those animals. Using low-stress Beef Quality Assurance- approved handling techniques, feedyard personnel make cattle comfortable as quickly as possible. The goal is to let them fully recover from transport stress, allowing them to acclimate to their new surroundings before adding another stress event.

“We have free-choice hay available when cattle get to the pen,” Cortese explains. “In some yards, it’s in the bunk. Most of the yards put a hay bale in the pen so the cattle can eat as soon as they get off the truck. They get something to eat, hydrate and then rest. We feel like a really important piece to managing the overall success of [each] particular set of cattle is receiving management.”

According to Cortese, backgrounding calves is vital to their health. If they have had the correct vaccinations, and have been introduced to various types of stresses, they have probably developed some disease resistance. When they get into a feedyard setting, they’re prepared to withstand illnesses. Since Friona Industries receives cattle from all over the U.S., those cattle arrive with unique challenges.

“If they’ve been backgrounded well, had a good health regimen before we get them, they’re set up to have success at the feedyard,” Cortese reports. “We don’t have to add any extra medicine because those cattle are ready to go. For those cattle that have been in a good backgrounding setting, [illness] isn’t a big problem.”

Conversely, calves from a closed herd, with few outside influences have a difficult time when they arrive at the feedyard. These naive cattle simply haven’t been exposed to enough environmental factors to increase immunity.

“We have had more successful ranch calves that are moved off the ranch to a separate backgrounding facility,” Cortese says. “This way they experience new environmental challenges, which in turn, helps their overall immunity when they arrive at the feedyard.”