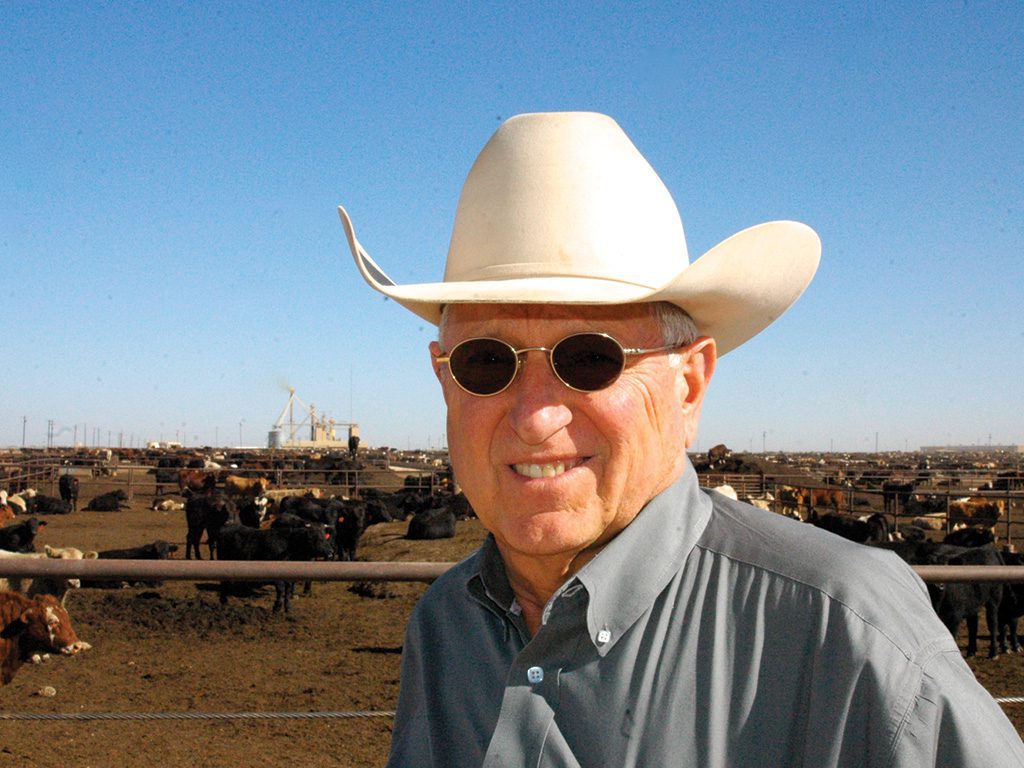 Trotter went into the hall during ceremonies in Oklahoma City in March. That was the beginning of a year of high-end events for the co-owner of Bar-G Feedyard. Trotter was also elected to the Texas Horse Race Hall of Fame, became a partner in All American Ruidoso Downs LLC, and, last but far from least, won a hometown team roping he’s been after for two decades.

This son of a small-town Methodist preacher says he is beyond blessed. From his folks getting him his first horse and tending to area cattle during high school, to running a 125,000-head feedyard and co-owning some of Quarter Horse racing’s finest, Trotter has achieved about as much as anyone in the cattle and horse businesses could imagine.

But when you get down to it, it’s the Bar-G and its many employees who keep him in the saddle.

“We’ve been part of the feedyard ownership since 1983,” Trotter says. “It has an overall capacity of up to 125,000 head. We also have a grower yard, and we partner with other producers across many southern states. We also farm several thousand acres near the feedyard and run 28 center pivots.”

Most of the farmland is planted in wheat pasture for grazing purposes to help provide forage for the operation’s large stocker program. Many stockers go into the Bar-G, but others are placed elsewhere or sold to fellow cattle feeders.

When a yard has over 100,000 head at the bunk, it runs through a lot of corn. The feedyard’s location just southwest of Hereford places it within a few miles of three unit train terminals.

“We’ve always used a corn-based ration,” Trotter says. “Along with the grain terminals, we have access to large supplies of corn silage, as well as field corn from area farmers.”

Like other custom feedyards, Bar-G handles all types of cattle. “Angus and Charolais crosses are always pretty dominant, but I also love Hereford bulls and the calves they produce,” Trotter explains. “We handle a lot of other crosses, as well as Mexican cattle. When fed right, they will perform as well as our native cattle and produce a quality carcass.”

Trotter works closely with feedyard manager and co-owner Kevin Bunch to manage each pen. Using the latest in computerized technology from Turnkey Computer System and a 70-inch television screen, they can easily monitor animal health treatments and overall production of every animal.

“This helps us manage each pen better and get the most out of every animal,” Trotter says, adding that “anymore, the difference in the quality of cattle from when we stared the yard doesn’t compare.

”Most cattle do so much better now. Contributions from the Angus Association have really helped our industry. Overall, genetics are better, and we have better feed ingredients and animal health products to help improve cattle performance.”

Finished cattle are marketed through all four major packers. “It all gets down to the type of marketing and contracts that are available,” Trotter says. “Some are sold through forward contracts or on a grid – whatever method fits the cattle being marketed.”

In the 1950s and ‘60s, the Rev. Clifford Trotter spread God’s word in several Methodist churches in and around Abilene. He and his wife, Irene, and their children later moved to Dumas. It was there that Johnny got his first horse. When the family moved to Hereford, he began roping and got his first job working cattle.

His father was a wonderful family man and teacher. Rev. Trotter ended his career as pastor of Polk Street United Methodist Church in Amarillo.

While the family still lived in Hereford, Trotter found another mentor in Shirley Garrison, a giant in regional grain handling and other agricultural operations.

“While I was in high school, he asked me to handle cattle he had on wheat pasture between Hereford and Dimmitt,” Trotter remembers. He managed pasture cattle up until he entered college at West Texas State University (now West Texas A&M) in Canyon.

“I loved WT, but didn’t last the first year,” he says. “There were issues with some cattle I was still watching. I decided then I’d stick with the cattle business.”

After a few years, he and Garrison leased a small grower yard in nearby Castro County. And in 1983, Trotter and several other investors joined Garrison in buying the United Beef feedyard, originally the Alpha Cattle Co., yard that was established in the late 1960s.

“It was a 40,000-head facility when we bought it,” Trotter says. “The original group was Shirley Garrison, Stanley and David Schaeffer from Dimmitt, Roy Bryan from Happy, Eddie Sutton and his dad J.W. from Dimmitt, and me.”

They kept adding capacity, eventually approaching close to 90,000. An adjacent yard they own adds another 35,000 head. The yard’s current ownership consists of Trotter, Bunch, Sutton and David Schaeffer.

Along with the feedyard operations and farms, Trotter’s business interests have expanded to include a trucking company and a local Ford dealership. “We depend on that line of truck and needed to make sure the local Whiteface Ford dealership remained in business,” he says. “We bought the dealership in 2007. With the help of Jon Galland and Seth Woolsey, it has proven to be a successful venture.”

But horses are also in his blood. “Before I really got involved with horses, everything had to do with getting cattle to the feedyard,” he notes. “But I had always enjoyed roping and watching Quarter Horse racing. About 20 years ago, I was dating Jana (whom he wisely married). I wanted to impress her, so I bought a race horse.”

He was hooked. He has gone on to be part of various owner partnerships in Quarter Horses that have burnt up the track and become highly sought as breeding stock. Trotter has been part of no fewer than four American Quarter Horse Association champion horses, namely the heralded stallion One Famous Eagle.

“Our ownership in him involves a partnership that includes the 6666 Ranch,” he says. “One Famous Eagle has sired three All American Futurity winners. He has really been a special horse.”

The AQHA has benefitted from Trotter’s continued involvement in the association. He served as AQHA president in 2014-2015 and has been part of numerous association committees. This year he received the AQHA Racing Golden Crown Award and was elected to the Texas Race Horse Hall of Fame.

Trotter’s success in the horse and cattle businesses led to a major investment this year. In October, he became general partner in a group that purchased All American Ruidoso Downs LLC. The deal includes the racetrack and horse sale company, as well as the casino. With Trotter’s track record in business and great partners, odds are the venture will be in the winner’s circle.

Perhaps his biggest honor was being inducted into the Cowboy Hall of Fame. During the National Cowboy & Western Heritage Museum Western Heritage Awards ceremonies in March, Trotter received the Chester A. Reynolds Memorial Award. It is named after the museum’s founder and given to individuals for their unwavering commitment to the American West’s future.

Hereford’s hold on him

Despite the glitter experienced in his career, Hereford remains his and Jana’s home. His community involvement includes work with local schools and churches. One of his biggest loves is the annual Spicer Gripp Memorial Roping in August (see CALF News Oct./Nov. 2017 issue).

The event is named after another Hereford resident who did much to
promote the Western way. The roping has an annual purse of more than $300,000 and draws the rodeo world’s biggest names. They keep Hereford on their schedules in between Jerry’s World in Arlington, The Cow Palace in San Francisco and the Wrangler NFR in Las Vegas.

Trotter has team roped in the Gripp’s pro-am competition since it began in 1994. He hadn’t ever won – until this year. “The Spicer-Gripp pro-am roping is something I’ve tried to win for 17 years,” he says. “I finally managed to be lucky enough for it to be my turn to win.”

He admires the continued support and tireless hours provided by Hereford area residents to keep the event a success. The likes of Steve and Carla Purcella, along with many other volunteers, help Spicer Gripp maintain a memorial foundation for students interested in studying agriculture at West Texas A&M.

“We’ve raised over $500,000 for the foundation as of this year,” Trotter says. “It gives a lot of students an opportunity they may not have had. We are very fortunate to have WT in our area. WT is in the center of the beef capital of the world.

“When Dr. J. Patrick O’Brien was [university] president a few years ago, I told him, ‘I’m not a world traveler, but still, everywhere I go WT is mentioned as a great ag school.’ We can be proud of what we have in WT. The new Agriculture Sciences Complex that’s under construction is going to be one of the finest facilities in the nation.”

Trotter has been behind the formation of various other scholarships and foundations through WTA&M. He has also been involved in the West Texas Rehab Center in Abilene and San Angelo, The Amarillo Area Foundation, the American Quarter Horse Association Foundation, various regional Methodist entities and many other Hereford, Deaf Smith County and Amarillo-area organizations.

One of Trotter’s most prized honors is being a recipient of an honorary doctorate degree from WTA&M. He has also been named to the Tri-State Western Heritage Hall of Fame, Deaf Smith County Citizen of the Year and the Texas Cowboy Hall of Fame. In other business functions, he is a director for several regional banks, including First Financial Bankshares in Abilene.

“None of my accomplishments would have been possible without being surrounding by wonderful people,” Trotter says. “Overall, we have more than 100 employees. Sixty of them have five-year belt buckles, six have 25-year buckles, five have 30-year buckles and three have 35-year buckles. They take pride in their stability.