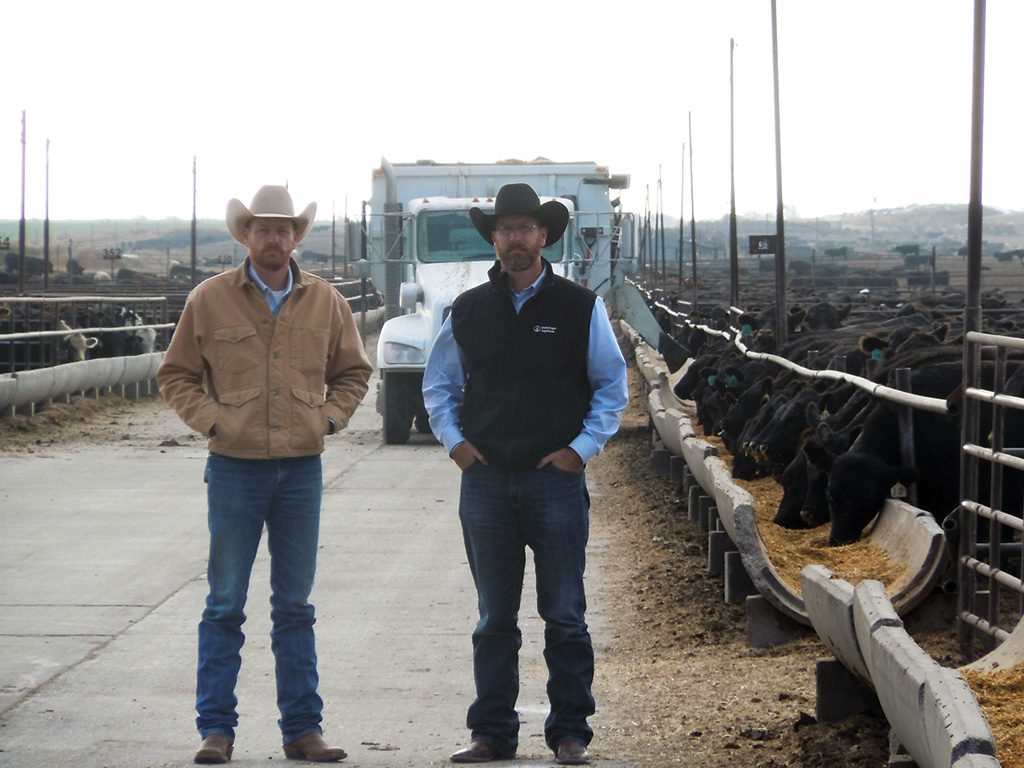 Purchasing a feedyard right in the middle of a financial downturn isn’t for the faint of heart. But, turning it all over to God and having faith in His plan, the Tiffany brothers not only made it to the other side, but they’re thriving on it.

This is a story about family – about brothers who impact the world of agriculture in more ways than the traditionally obvious. From 1988 until 2002, Shane and Shawn Tiffany grew up watching and helping their father manage Black Diamond Feeders at Herrington, Kan. In 2002, their father moved on in his career, and they believed this would be the end of their time with the feedyard. Little did they know a few short years later it would enter their lives again.

Shane and Shawn Tiffany both attended Kansas State University, earning their degrees and moving into the world of professional agriculture. Shane headed to Bartlett Cattle Company where he worked the hedging desk, trading cattle and other commodities. Shawn developed an extensive resume in the production cattle world, working with such companies as Black Diamond Feeders, Lindsey Land & Cattle Company, and Chair Rock Angus.

While they were enjoying life and building successful careers within the agriculture industry, they were still working for someone else, trying to hush that entrepreneurial spirit so many of us “aggies” feel.

In what would seem a twist of fate, Black Diamond Feeders’ owner called the brothers and asked them to consider purchasing the facility. After deliberating about it, they went in as two-thirds partners in the company – a dream come true.

“We started right in the thick of the financial depression when we bought into the company in 2007,” Shane recalls. “There were a few good years, but just as many bad ones. We pushed through it and are so glad we made it to the other side.”

When they came in to take over the feedyard, there were 2,500 cattle and about 10 employees. In 2011, they bought the other share of the feedyard, becoming sole owners. They’ve since expanded the yard at Herrington in January 2017, and purchased one at Marquette, Kan., in July, effectively doubling their feeding capacity in a little over a years’ time.

In a calendar year, they feed approximately 65,000 head, employ 45 staff, and feed for over 200 customers. They attribute this amazing growth to the repopulation of the cow herd over the past year, having amazing customers, and of course, their hard work and God’s blessing.

Tiffany Cattle Co., has an impressive ability to average 90 percent Choice beef among all cattle they feed. Shawn attributes this feat to the amazing cattle and genetics their customers send them. “It’s easy to raise great cattle when you receive great cattle,” he says.

The operation is also unique in that it’s a nearly 100-percent custom-fed yard. Shawn and Shane personally own very few animals in their facilities. This speaks volumes about the trust and loyalty their customers have for them.

They also have access to the U.S. Premium Grid and specialty processors such as Creekstone Farms Premium Angus Beef, enabling them to remain competitive in the premium cattle markets.

“You’ve got to trust your feeder. This industry is all about relationships and trust,” Shane advises those standing on the outside of cattle feeding, looking to get in the business.

“If you don’t feel comfortable with someone, you probably shouldn’t be working with them,” he continues. “While you’re shopping around for your ideal feeder, ask every question you have; there’s no such thing as a dumb one. The right feeder will be happy to help you understand every step of the process, no matter how many questions that takes.”

As brothers working together, one would think their relationship could be fraught with turmoil, but the Tiffanys don’t let work come between them.

“We play to each other’s strengths, and respect the God-given ability we each have,” Shane explains.

“We also have open-ended communication, spending at least one day a week together, and have a monthly business meeting to discuss and plan current items and future events.

“We enjoy sharing this business together with our wives, as well. Involving our entire family in the planning of our company and having the excellent staff that we do is part of the secret to our success.”

The Tiffany brothers attribute the biggest portion of their success to their faith in God and His ability to continually bless their cattle company. “Without God, none of this would be possible, and we never want anyone to believe otherwise,” Shane says.