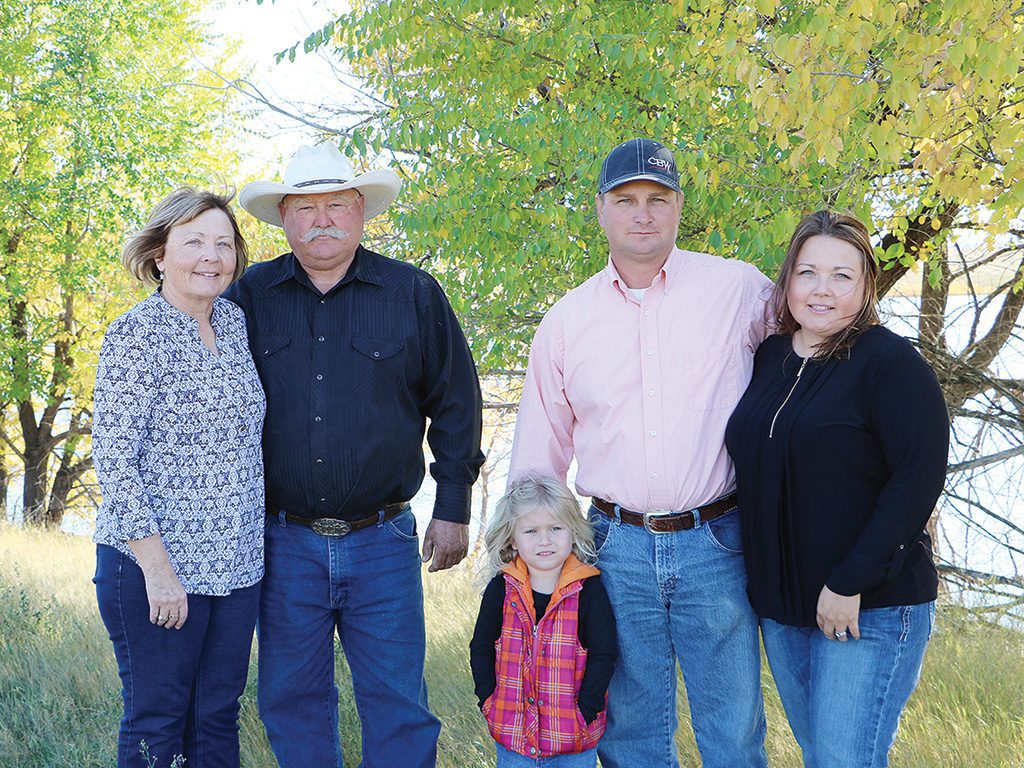 Brian and Codi Mills have a plan. The lesson they convey is that you have to work hard to make it happen, and it takes the whole family to move it forward.

Codi is of French decent, her family having arrived here six generations back. They moved through Ohio to the Belle Fourche River Valley of South Dakota before finding a suitable ranch near Nisland.

Brian’s story takes a bit more twisted path. His Scottish-born ancestors landed in Virginia and wound their way to a logging camp near Deadwood, S.D., where they gained employment. Never being involved in ranching, Brian’s folks lived in town. To his delight, he was farmed out each summer to relatives who ranched, and the neighborhood embraced the town boy who wanted to raise livestock. He eventually spent time on the sheep ranch of Jerry and Marie Gruwell, putting together a small flock of ewes.

The couple met and made their relationship permanent after college, when Brian worked at the Philip, S.D., Farm Service Agency (FSA) and Codi for a newspaper, Cattle Business Weekly. All details aside, they simply had the same goals in life.

After marrying, the couple landed in Sturgis, where Brian had secured a banking job and Codi was able to run the newspaper out of her home office. It was 20 miles from Codi’s home place, Vallery River Ranch.

Codi’s parents, Randy and Rhonda Vallery, welcomed the couple onto their ranch near Nisland; Codi had always kept livestock there, and Brian started helping out immediately. Later, Brian went fulltime at Vallery River Ranch. The operation is highly diversified, needing plenty of labor. It includes irrigated corn, alfalfa and wheat, a cow-calf unit and a backgrounding lot. The Vallerys also run a commercial hunting business.

Codi was given an opportunity to own cattle by her grandmothers, who each gave her some stock. Consequently, the young couple had a leg up building their herd of mostly Angus cows to 125 head. They are run separately from the Vallery herd in the summer, although the two herds are wintered together. All health work, such as spring branding, is done together as well.

Brian’s favorite division is clearly their 800-head backgrounding lot. Built in the 1970s, it enables the ranch to wean and handle their own calves, and provides improved management for replacement heifers. Most of their commercial feeding customers are local ranchers.

They raise corn silage, alfalfa and shelled corn on site. Brian says he would like to feed distiller’s byproducts, but hauling the feedstuff long distances is a problem.

The Mills prefer to handle their steer calves until late fall, and heifers until February or March. Specific decisions on management may change each year with weather, markets and finances. They market cattle at local auction markets.

The cow herd is black, with about 25 percent brockle-faced cows, a remnant of hardy Hereford genetics. Brian says their biggest problem is availability of grazing in the dry, short-grass area. Competition for leases is stiff, as the Black Hills neighborhood fills with an onslaught of housing developments and commercial tourist sites.

Herd disposition has been a number-one priority for the Mills family. Brian describes calf conformation as important, but secondary. Sound udders are on the list for improvement, as well as efficiency.

“We definitely have some ugly cows,” Brian says, but laughs that someday that will change, too. His obvious concern is calf health and immunity. Clean water tanks are imperative, along with chelated minerals. Weaned calves are fed “what they need, not what they want.” Protein tubs are provided for cows in August, as the grass shortens.

Illustrating the level of management at the Mills operation, they hand cattle all ways possible – on horseback, foot and with four-wheelers. The couple believes in spending time among their calves in the backgrounding lot. They want them manageable for their next owners, and believe in stress-free handling.

Providing outside income for the ranch, Codi has been the Cattle Business Weekly editor-in-chief for the past 12 years. She works out of the couple’s home; they continue to live in Sturgis while Brian commutes to the ranch. Their decision to leave “a little space” between the family living units has worked out well. The greatest stress comes, of course, while calving heifers. Rhonda takes the night watch, while Randy and Brian take the day shift. Codi helps on weekends. Brian will stay out at the ranch during storms.

“We all pitch in where we’re needed,” Codi says.

There are no designated business meetings for the extended family, but they have lunch together daily. It’s been said that, if a family is going to succeed as one unit, all folks involved need a special kind of maturity. Emotions must be held in check for the family and business to move forward.

“It’s important to remember, your family may not always like you, but they always love you,” Codi emphasizes.

Both Brian and Codi had other jobs before landing with Codi’s folks. They believe that seeing other places and other methods of management have been key to their success. They’re open to new ideas and make a point to leave home to continue to learn. That’s a piece of advice they want to pass on to others who ranch.

“It’s easy to bury your head in the sand,” Brian says. “Get out and go to grazing tours and Extension activities.”

The future and family

One of the Mills’ primary goals is to expand their backgrounding lot, whether through private ownership of calves or commercial customers. Codi’s parents’ hunting lodge, High Plains Game Ranch, is time consuming, and the younger generation may not carry on that entity when the Vallerys retire. Notwithstanding, Brian loves to hunt just about anything and is an experienced trap shooter.

The young couple has a four-year-old daughter, Kimber, who’s the seventh generation on the ranch. She enjoys gymnastics camp and provides plenty of entertainment for her parents.

Randy Vallery says the key to successful transition is for each generation to have the freedom to bring something different to the business; something they want to do.

“If it doesn’t work, it’s because we ain’t talkin’ to each other,” Randy says of six generations of family ranching the same property.