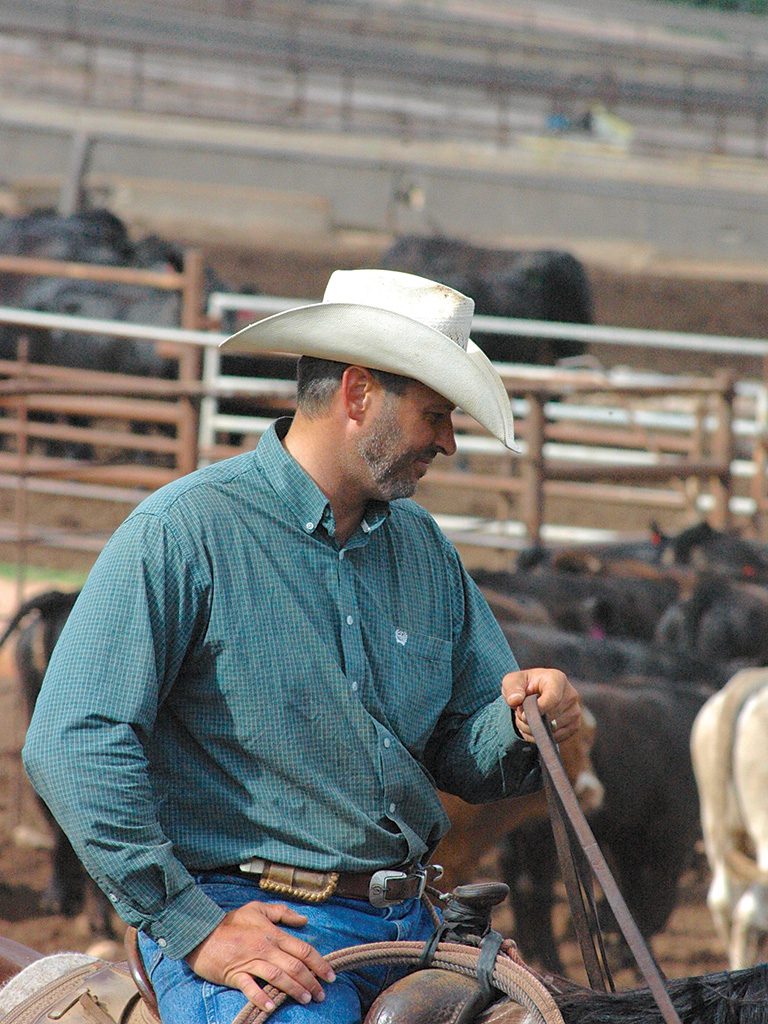 Justin Crocker rarely leaves his office. He buys and sells cattle and feed, checks the market, makes hedges and loves every minute of it. His office – on horseback at his family’s Texas Hill Country backgrounding yard. 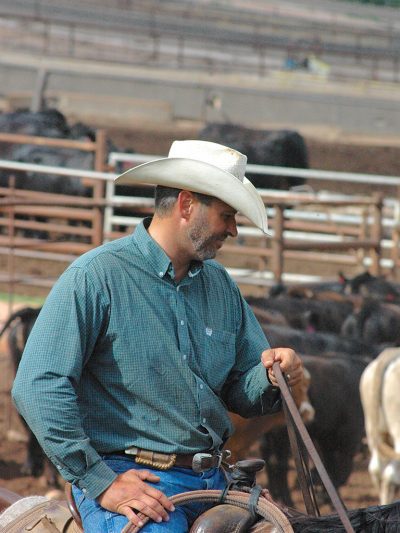 He and his wife, Missy, own Mason County Feeders. The 8,000-head backgrounding facility straightens out calves and yearlings and also facilitates a confined cow-calf program.

Using word of mouth from regular customers and social media, they also market various feedstuffs to other producers. “It’s our way of diversifying our operation and still being able to do what we love,” Crocker says.

His father, Don Crocker, was long in the feedyard game before Justin was born. “I was born and raised on a feedyard,” says Justin, 37. “We’re originally from around Garden City, Kan. We lived in Pierceville, and my dad managed Gigot Farms feedyard in Garden and several other yards across the country.

“My dad fed cattle in Texas, Kansas, New Mexico, Colorado, Arizona and even Australia. He’s been able to pass down very diverse management tools, some conventional, but mostly unconventional. My brothers and I worked at many of the feedyards he worked for.”

Crocker’s first real job was cleaning water troughs at Reeves Cattle Co. in Garden City during summers when he was in grade school. “I’ve worked every position there is to offer at a feedyard,” he says. “Basically being raised in yards, I got experience in many different ways of managing. Most of these management tools I use today will probably never change, but many of these tools are constantly evolving with these fast changing markets.”

The Crockers saw an opportunity to co-own the yard in Mason County in the mid-‘90s. “My dad bought into this feedyard in 1995,” Crocker says. “It had been owned by Lee McMillan. It was a big change moving from the High Plains to the Texas Hill Country – a completely different ranch and feeding environment.

“My dad took on a partner, Hughes Abell, who is now vice president of the Texas and Southwestern Cattle Raisers Association. They began acquiring land in the area. The ranch was primarily a stocker program with yearlings on grass.”

Like other Texas producers, the drought years of 2011-2013 forced them to make dramatic changes. “During the drought, we started running a cow-calf feedyard,” he explains. “We started replacing yearlings with Wyoming/Nebraska cows.

“With the availability of many different feedstuffs, that proved to be a good way to maintain our cows and for them to raise their calves. We also took in cows and heifers for others. We even bred heifers and cows in the yard. That’s a practice that still works for us when it’s needed.

“We incorporate the feedyard in our cow-calf operation by rotating dry cows and wet cows between the yard and grass. We also have a lot of second-chance cows that were open. We rebreed them. If they come up open again then we sell them.

“We feel that’s cheaper than going out and spending $1,500 to $1,800 on a bred cow. Many cows are aging. They’re still raising calves at 12 to 14 years old. We provide a ration for them to guarantee a proper nutrition program.”

Although Mason County is in the Hill Country, it’s far enough north for English cattle to still thrive. Most cattle the yard backgrounds are Black Angus. “We have great success in backgrounding them,” Crocker says. “We try to be about 85 percent black cattle with one-eighth or less ear.

He works closely with order buyer Jeff Owens who knows the territory. “He gives me the opportunity to cherry pick different sales and put decent numbers together,” Crocker points out. “We cover a large area. We buy cattle from auctions in Fredericksburg, San Angelo, Abilene, Graham, San Saba and other towns. We normally buy them as 6-weights then background and sell them as 8- to 8.5-weights. It makes sense for me to grow them out more because of the low cost of gain we’re seeing.”

Most of the yearlings go to feedyards in the Texas and Oklahoma panhandles and Kansas. “I partner with Jeff on a lot of cattle,” Crocker says. “If a feedyard wants them heavier, we’ll take them to 900. And when we can’t pencil out yearlings, then we’ll look for other opportunities with feeder cows and bulls and the older cows that need help getting bred-out.”

Crocker says price risk management is vital. “The way I manage risk in my cattle has completely changed since these extreme levels of volatility hit us,” he says. “Since I’m only buying cattle with fatter margins, it can take a few days just to put one load together. By that time, the price can easily change. They can easily be losing $9/cwt.

“Now, when I put in an order for loads, I protect my cattle with options even before one head is bought. I’m just trying to protect my margin. In my opinion, it’s suicidal not to hedge your cattle in some way. These markets are too volatile and there is too much to risk. I can buy a put option to protect a load of cattle and sleep good that night.”

The Crockers have learned to use numerous feedstuffs as feed supplements on the ranch and as full rations at the yard. “Renewable feedstuffs are a main portion of my ration,” Crocker says. “The inclusion rate of corn in my ration is pretty low. I get a lot of brewer’s grain out of San Antonio and Austin. Brewers like the service as a way to get rid of the grain. If you can maintain those relationships, that’s good for you.”

They also provide various types of rations for sale to other producers and feeders. “We often have access to bakery waste products,” Crocker says. “We look for those and other waste products that can work in a ration program. There isn’t anything edible we won’t bid on.”

Among the feed they sell are grower rations that are either pelleted or textured, cow rations, horse feed and other feed. They’re marketed via their website, masoncountyfeeders.com, and social media. “We advertise our ration service over our Facebook page,” Crocker says. “We can reach our regular customers and potential customers. We hope to expand that marketing program.”

Social media is what makes Crocker’s job much easier, even when he’s still riding pens when its 100 degrees and the humidity is high, or when a winter storm blows in. He’d have it no other way.

“If I can stay on horseback all day, I’m going to. That’s what I really enjoy,” he says. “The smartphone has made my office pretty big. I can come out here and ride cattle, make cattle and feed sales, buy cattle, look at Cattle-Fax reports, trade futures and handle nearly all of my business. I can do everything on horseback.”

The Crockers are longtime members of Texas Cattle Feeders Association and the Cattle Raisers. They want to support groups that will promote the beef industry.

“Missy and I live at the ranch and have two boys, a five-year-old son, Ty, and two-year-old Brady,” Crocker says. “They love horses and cattle and the older one is already on a horse and helping some. We love this life, and we’re dedicated to making sure our boys can be part of it.”

And like they’re dad, Ty and Brady will grow up at the feedyard. Not a bad way to be raised.