On a hot Saturday afternoon in Centennial, Colo., the patio outside of Tony’s Meats and Market is teeming with people making an annual pilgrimage to stock up on their fresh-roasted green chilies. The familiar smoky smell – one of the first sensations of fall in this part of the country – has people lining up to make sure they get their hands on one of the local delicacies. There are also a lot of familiar faces, and Tony’s Meats and Market President and CEO Daniel Rosacci, is front and center, welcoming his loyal customers. Rosacci walks up to two longtime customers, Gladys and Peggy (94 and 96 years old, respectively), and greets them with a big hug. Gladys and Peggy have been coming to Tony’s Meats and Market for decades, and their welcome hug is not an unusual occurrence at this family business. For Rosacci, this is what differentiates Tony’s from its competition and is the core of its brand – it is how the place makes people feel. 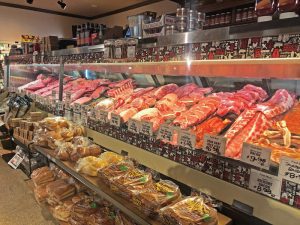 Tony’s Meats and Market has been in business since 1978 and has earned a reputation as a top-tier market in Denver. Rosacci is the son of Tony Rosacci, who he describes as a hard-working entrepreneur. Growing up in Detroit, Tony started carrying groceries for people in his wagon when he was 8 years old. After serving in the U.S. Army, he worked in several markets and grocery chains, eventually working for another local butcher in Denver. Tony’s dream was to open a market of his own.

That dream became a reality when Tony was driving his young son, Daniel, back from a baseball practice and saw a shuttered 7-Eleven building up for sale. Deciding the time was right, Tony wrote a check for $1,300 and even had to sell the family home to pay the early bills. Daniel Rosacci has been working at the store ever since, starting as a dishwasher in the beginning. Now CEO, he offices out of a separate building about a mile away. He frequently visits the store “for therapy and to work on the floor for a few hours.”

“It all starts with the ‘why?’” Rosacci says, and that “why” is focused on people first. Appearances change over time, but focus on the customer has remained the same.

“They would see a difference, but they would not feel a difference,” he says of his customers’ perceptions of the store from early on and now.

Focus on the basics

At the beginning of every year, Rosacci gathers his staff to work on the annual business plan. The first order of business is to pull out his father’s original vision – to “create a place where people feel like family” – and to reflect on how they are living up to that promise.

Based on his father’s vision, Rosacci’s mission is to “help people lead happier and fulfilled lives, and to become Colorado’s greatest market.” Focusing on his customers is only part of the formula, however, as Rosacci has learned that more is needed to build a consistent brand.

“There needs to be a higher purpose,” he explains. For him, that is being a leader and teacher to his 165 employees, his diverse group of vendors and buyers.

“Providing meat is what we do, but it’s not why we do it,” Rosacci says, pointing out that relationships with customers, employees and vendors are central to the Tony’s Meats and Market vision.

To emphasize Tony’s core values, Rosacci identifies six characteristics of behavior that exemplify treating people like family on a daily basis. Those characteristics are grit, integrity, kindness, hustle, intention and situational awareness. He can teach these behaviors, but Rosacci has learned that recognizing people for demonstrating these traits is a powerful way to empower results. He carries a box of t-shirts in his car, each with one of the six traits printed on the back. When he’s working the floor and sees an employee doing something special that exemplifies one of the traits, he presents them with one of the shirts.

“They don’t get the shirt unless someone gives it to them,” Rosacci says. His employees take pride in wearing the shirts they have earned.

The recognition has helped created a “Tony’s Culture” that, according to Rosacci, has built a level of morale “better than ever.” His employees are empowered to work hard for their customers and they love the recognition. It shows, as many of his employees have been there a very long time. Rosacci lists the tenure of a couple of notable employees, including his Centennial store manager Stuart Stevenson (24 years) and Felix, a meat cutter (24 years).

As we walk through the store Rosacci greets each and every employee, remembering everyone’s names. You can tell Rosacci has an enormous amount of pride in his people, and he often reflects on the difference that working at Tony’s has made in people’s lives. Many of their employees have worked there since their teens and college years, and are now loyal customers themselves.

Rosacci is passionate about how people feel, but he’s also fanatical about quality. Instead of relying on standard USDA meat grades, he has created his own specifications to ensure a consistent experience for his customers. Many of the items in his markets are branded under the Tony’s name that he can control.

“I have 41 years of relationships,” Rosacci explains, which means he’s got to make sure that customers get the same feeling each time they come into the market and enjoy Tony’s food.

Rosacci values the relationships he has with his vendors, and he takes time to get to know them. He wants to learn about the maturity of the cattle, the breed, the marbling score, size and genetics. His reasoning for creating his own specifications is two-fold – one is to hold his vendors accountable, and the other is to maintain the consistency and quality standards of the Tony’s brand. He will often be there to inspect meat deliveries. All incoming meat is tested for temperature and needs to pass the “smell test.”

In his 41 years working at Tony’s, Rosacci has seen a lot of changes in the business. From technology to fad diets, there are a lot of things to worry about. He’s watched competitors come and go, and he’s seen threats from places like online butchers that were unimaginable back in 1978. He’s seen the “natural foods” movement and big box stores selling everything to everyone, including high quality meats.

Rosacci talks about how innovation on the wholesaling side of the business has impacted the retail side of the business. They originally ordered whole sides, but that has become harder to find. Advances in production, distribution and transportation have made boxed beef the norm.

Rosacci plays a big role in procuring his inventory, and he is passionate about making sure he’s getting the highest quality product.

“I’m working on ordering 35,000 pounds of prime rib for the holidays,” Rosacci says, noting that, for most of his customers, that is one of the biggest and most important meals of the year.

Rosacci is also keenly aware of diet trends and social issues in the meat industry. “We stay sincere to who we are,” he says. “If it’s the best, we’ll have it.”

Respecting the animals and the craft of butchery has been a guiding principle of the business. Rosacci explains how he values the farmers and ranchers who take care of their livestock.

“If you take care of your cattle, you will get the best quality of meat,” he says.

Diet fads will come and go, but Tony’s customers are looking for a consistent product. When Grandma’s coming to dinner, you can’t afford to cut corners, and Rosacci is not going to sacrifice quality to chase the flavor of the month.

Reflections and the future

After more than 40 years in the business, Rosacci has learned a lot, and he takes a tremendous amount of pride in what his family has accomplished. The business has grown and the one store has grown to three. It has emerged from (literally) a family-run business with Rosacci, his parents and his siblings working at the store to a 165-employee business. They have expanded into catering, and their markets now include a bakery, prepared foods and wine, as well as fresh fruits and vegetables.

Asked about the most important things he has learned over the years, Rosacci says that it took him “a long time to not worry about everyone else.”

“I know our niche,” he explains. Chasing the big box stores and internet ordering companies isn’t his focus anymore.

That’s just fine, because going to those places just doesn’t give you the same feeling that walking into Tony’s gives you. That feeling – which is as much part of Tony’s brand as anything they sell – is why generations of people keep coming back.

For Rosacci’s longtime customers, Gladys and Peggy, it’s an experience that they have come to expect, and it is a local treasure that will live on for generations to come.