Where She Wants to Be 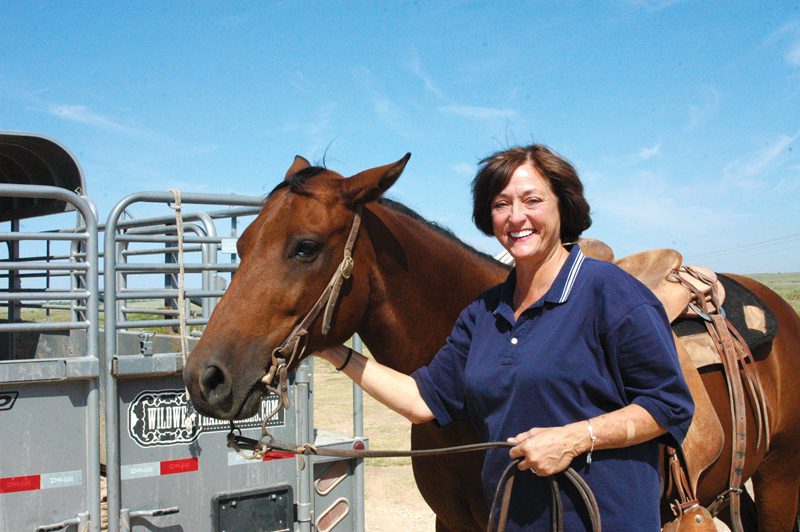 From the JA to the XIT, the Texas Panhandle has corralled some of the nation’s most famous ranches. One that just turned 90 is the Sneed-Pool Cattle Co. Its president, Pamela Stevens, has held its reins for nearly 25 years. And she’s eager to expand production of the sprawling Angus-Hereford cross operation.

Instead of selling calves just after weaning, she’s placing them on wheat pasture and selling them as yearlings. The cattle are tailored for niche markets that are demanding more from producers than just good-tasting, tender beef. “These cattle are all Certified Natural and GAP 4 Certified by IMI Global,” Stevens says, “They will be likely be placed on feed in a natural program at one of our regional feedyards.” 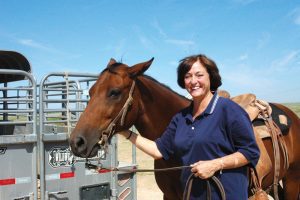 Stevens lives in Amarillo with her husband, Scott. When not at the Sneed-Pool office in town, she spends as much time as possible checking cattle and pastures at the ranch about 40 miles out of the city.

Like virtually all producers, she is struck by the misinformation animal activists are spewing about livestock production and handling. This tripe has made many consumers skeptical about how cattle are treated.

Of course, animal welfare and care for the land are at the top of Stevens’ list. Little else matters other than family. To meet demands of packers and food manufacturers, more of the ranch’s calves are produced for natural programs and even more specialized markets.

The GAP (Global Animal Partnership) certification, for example, is designed to provide third-party proof to people who want meat that comes from “greener” sources. For beef cattle, GAP 4 means they were raised on pasture. Once they enter a confined feeding program, they may still maintain a GAP status.

“If all of this identification process keeps people confident in our beef, then we’re willing to take the extra steps to make sure that happens,” Stevens says.

Sneed-Pool Cattle Co. has maintained a stewardship-oriented philosophy since it was formed in 1929. It is located in the northwestern Texas Panhandle and stretches across Moore and Hartley counties. J.T. Sneed, Jr., was the original owner of the Sneed Ranch. He had moved to Dalhart from Georgetown, Texas, in the early 1900s due to his interests in banking and cattle. He came from a ranch his father had built in Williamson County, near Austin, to run the Dalhart National Bank.

In the early 1900s, his father J.T. Sneed Sr., began the Moore Co., ranch when an English company, American Pastoral Company, decided to sell out its LX ranch land in the Panhandle. J.T. Sneed, Jr., bought a portion of the land in southeast Moore County.

Prior to that purchase, Sneed, one of his brothers and an uncle inspected the Moore County land. The uncle was in favor of the purchase until an infamous Panhandle dust storm blew for two days. The uncle backed out, but Sneed Jr. purchased the land anyway and continued to build the ranch as more land became available.

When his grandson, Joseph H. Pool, took ownership of the cattle operation, he changed the name to Sneed-Pool Cattle Co., Inc. Pamela Stevens, Pool’s daughter, has run the ranch since the late 1990s.

The goals at the Sneed-Pool Cattle Co., Inc., have not changed. “We strive to improve the land, the wildlife and the cattle while preserving western heritage for generations to come,” Stevens says. “That was what fascinated me about the ranch early on.

“Everyone in my family lived in town [Amarillo]. But I loved spending time at the ranch. I always loved to ride horses. While in high school, I convinced my parents to let me live with the ranch foreman’s family during the summer. I learned a lot from them and later Tommy and Mary Hodnett who also helped manage the ranch. I eventually put a small motor home next to the headquarters and ran a garden hose to it for water. I knew being involved in the ranch was what I wanted to do.”

She attended Texas Tech University in Lubbock and studied animal science. Along with her father, her mother, Marilyn Pool Allen, was a great inspiration. “My grandmother, Elizabeth Sneed Pool Robinette, also saw my love for the ranch and supported me from the start,” she adds.

For decades, Herefords were the only breed on the ranch. Stevens has certificates that record J.T. Sneed Jr.’s first bulls and cows registered by the American Hereford Association. The west ranch, located southwest of Channing in Hartley County, is still nearly all Herefords.

“We’re very picky about our replacement heifers. They all come from the west ranch,” Stevens says. “We have never bought any replacements. We’ve raised them all.”

Soon after she began running the ranch, they started crossing Hereford females with Angus bulls. The baldies worked well on the ranch’s native grasses. “Our native grasses are primarily buffalo grass, various bluestems and Gama grasses, and spindle top,” Stevens says. “Our stocking rate is from 20 to 25 acres per cow.”

Due to the sometimes-rough terrain and semi-arid climate, they have experimented with Longhorn and Corriente bulls to measure calving ease and calf performance. They have also tried Brangus and Charolais bulls, but the Angus-Hereford crosses have proven to perform the best.

“We use only Angus and Hereford bulls that are usually bred to Angus-Hereford cross cows,” Stevens says. “I like the hybrid vigor.”

Females are bred to calve in warmer months – March, April and May. “We had always calved from December through February,” Stevens says. “In 2007, we decided to go with the later months to miss most of the winter weather. It’s not natural to calve before there is grass if you can keep from it. Also, we brand in May and it’s easier to brand a 300-pound calf.”

Supplemental feed for the calves normally consists of wheat hay acquired from a neighboring farm and mineral tubs. Vaccination and other preconditioning measures depend on when and how calves are marketed.

“Many calves are marketed through the Superior Livestock Auction network,” says Cody White, ranch manager. “The calves we’re placing on rented wheat pasture are on a program that includes a Vision® 7 blackleg along with Scour Boss®, Pyramid® 5 with Presponse®, Cydectin® injectable wormers, and a MultiMin® shot.”

The calves include about 500 heifers and 100 steers. “We expect to see them gain from 3 to 3.5 pounds on wheat and a backgrounding ration,” White says. “Calves will be placed at 585 to 620 pounds and marketed at 850 to 900 pounds. They will be Certified Natural and GAP 4 cattle. We are also placing some replacements heifers on wheat.”

Stevens says she’s eager to see how the calves perform on feed. And next year, she plans to retain ownerships of a similar number of calves.

“We fed some in the Ranch-to-Rail program through Texas A&M, but this is a much bigger step,” Stevens says. “I’m a little nervous.” She notes that additional steers and heifers will be marketed via contracts over the Superior auction.

For a ranch that is a traditional cow-calf operation, with interests in horses and hunting leases as well, being apprehensive about taking the extra step in the production cycle isn’t unusual. Feedyards often place cattle for ranchers feeding for the first time.

Retained ownership isn’t for everyone but, like Stevens, many producers feed a set of calves to learn more about their genetics and how they perform at the feedyard and packer. When calf prices are low, like they have been this summer and heading into fall, placing them on feed allows for more time to market calves.

Fat prices at $100 per cwt. or lower were not attractive in early fall. Neither were feeder cattle prices at $135. But there is time for a market rally by the time cattle put on another 200-300 pounds.

Both drought and fire are something every West Texas ranch must be prepared for because rains can skip a season and measurable rains can be more than a year apart. All or most counties have fire bans most years. In 2011, drought helped spawn vicious wildfires over parts of the Panhandle. Many ranches were scarred, including the Sneed-Pool.

“We lost half the ranch and 26 miles of fence,” Stevens says. “We had to sell half the cows. We’re still trying to build back up. Most grass has come back, but we’re having to go deeper for water. Wells that were once 80 feet deep are now 300 feet deep.”

But Stevens and other regional ranchers are resilient in their efforts to manage ranches around the climate and the market. “I keep doing the numbers to try and stay ahead,” she says. “I’m steadily trying to improve cattle and monitor the markets.

“Along with manager Cody and other wonderful cowboys, Jody Hazen, Hunter Kennedy and Codi Myers, I’m blessed that my nephew, Tanner, and daughter, Michelle, are here to help learn how this ranch operates.”

Yep, Pamela Stevens is where she wants to be.