Beef With a Side of Dairy 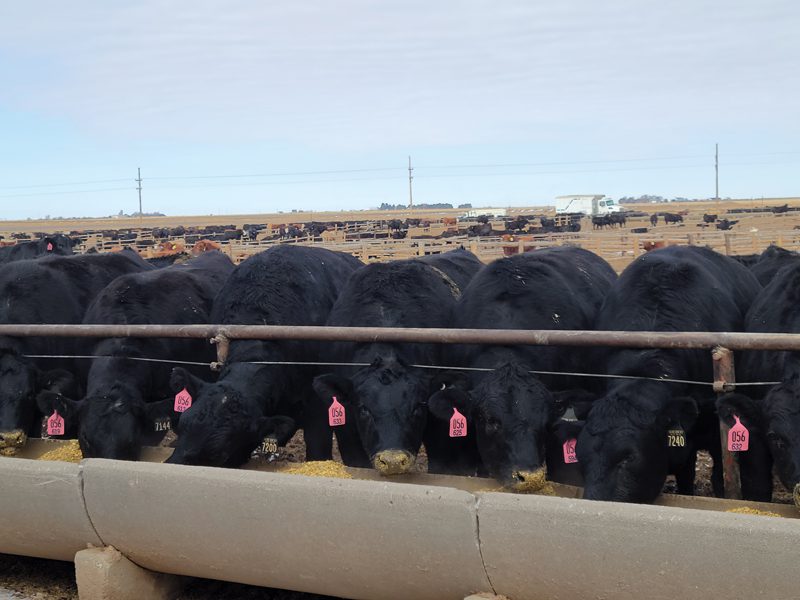 Producing milk, of course. But as the beef business has learned over the past few years, there’s another answer that’s becoming more and more important.

A dairy cow is good at producing beef-sired calves that, in turn, produce high-quality beef.

Getting to that point, however, has been anything but easy. 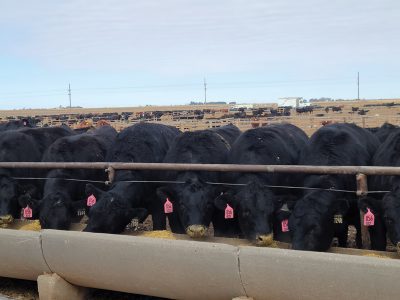 “We worked for years on developing it. But we weren’t getting along very good,” says Tom Jones, manager at Hy-Plains Feedyard, Montezuma, Kan. “We were getting really inconsistent quality grade results, and the red meat yields and shape of the cattle and conformation wasn’t happening the way we wanted it.”

That’s because, Jones says, not just any beef bull has the genetics to fix the issues a dairy calf brings to market; the kind of things that keep packers frustrated and reduce the value of a straightbred dairy steer.

“We started off trying several different bulls,” he says, “but we’re feedyard people, not geneticists. So we weren’t getting our genetics lined up the way we needed to really make a big difference.”

Indeed, they quickly learned that you can’t put just any black bull on a dairy cow and get the feedyard performance and characteristics you’re looking for.

At roughly the same time that Hy-Plains was experimenting with the beef-on-dairy cross, bull studs such as ABS were looking to tap into the trend – and learning the same lessons. They were pulling Angus semen out of the tank almost randomly and using it in dairy cows. “But we found out real quick that wasn’t working. It didn’t fix the problems,” says Dan Dorn with ABS.

Dairy breeds, Holstein primarily, have a different body type and carcass characteristics than beef-type cattle. The ribeye is shaped differently; it’s longer and more angular than the round shape consumers are used to.

“We talk about spring of the rib. There’s a lot more rib length on that Holstein,” Jones says. Then the round is less pronounced in Holstein cattle.

Beyond the shape, dairy beef tends to be softer, without the firmness typical of a steak from beef-type steers. And the color of a steak from a dairy steer is more pink than red. “You can’t put Holstein beef and native beef in the same counter for the consumer,” Dorn says. “They’ll pick the native beef all day long because it has a darker red color.” Those traits present problems for retailers.

“We seem to fix that with the right genetics,” Dorn says.

How they did that, beginning in 2014 with a program called New Era Genetics, was to focus on hand selecting 30 to 50 Angus and SimAngus “super cows” to create hybrid bulls. All the bulls were performance tested and the top 10 percent were selected. Then the bulls were tested for fertility, calving ease, gestation length and other factors important to a dairy producer. That eliminated about half of the bulls. “So now you’re down to the top 5 percent, and that’s the bulls that go into stud,” according to Dorn.

Continuing this process year after year has refined the genetics to the point that the beef-on-dairy cross is a viable and potentially profitable part of the beef business, Dorn says.

Given the parallel paths that ABS and Hy-Plains Feedyard were on, it was only a matter of time before the two hooked up. The partnership has been a win all the way around.

“We’re focused on feed efficiency first, which is the No. 1 profit driver in the feedyard. And then carcass after that,” Dorn says. “It’s really focused on terminal genetics. You don’t want to keep these [heifers] as cows.”

With the ongoing effort to refine the genetics that make the beef-on-dairy F1 cross a winner, Dorn says that now, packers are asking for the cattle rather than spurning the straight Holstein steer. “Retailers are starting to look at it because it’s beef with a story.”

According to Jones, the feedyard shipped more than 4,000 beef-on-dairy crosses in 2021. Here’s how they performed:

Even better, ribeyes from the F1 cross are now averaging 13.84 square inches on the crossbred cattle coming out of Hy-Plains. “That is absolutely center-of-the-plate preferred,” Jones says. “It’s just exactly what they want. It’s a big deal, actually.”

Beyond those numbers, Jones says feed conversion, while not quite as good as quality beef steers, was much better than straight Holstein steers, and the F1s had about 6 percent more days on feed. But the hybrids had better yield grades than straight beef steers. “So our yield grades were going lower and our quality grades were going higher. We were getting more Choice and Prime with less fat,” he says.

“And we’ve made significant progress in the last five years, moving up into where we’re much better than the commodity cattle here in the yard,” Jones says. Those type of cattle generally grade around 70 percent Choice, maybe a little better.

What’s more, according to research conducted by Texas Tech University with beef-on-dairy steers at Hy-Plains Feedyard’s Research Center, the crossbreds performed well in consumer sensory tests. “In the consumer sensory panel, the most tender was a straight dairy steer,” according to the research report. But the beef-on-dairy cross produced more tender steaks than beef steers.

“On juiciness, we were slightly more juicy,” Jones says.

The beef-on-dairy cattle at Hy-Plains are marketed to packers on a grid “and we’re getting a bit of a premium for them,” Jones says.

At the moment, agreements to produce and buy beef-on-dairy calves happen between individual feedyards and individual dairies. However, Dorn says ABS is developing a program to help feedyards and dairies connect the dots on a bigger scale. “We’re just on the cusp of creating that actual program,” he says. “We’ll work on lots of different agreements with different feeders, different packers.”

Dairy producers are numbers nuts just as much as feedyard folks. So they can identify the top cows in their barn and breed those to sexed semen to produce replacement heifers. The rest of the cows could be bred to beef bulls and produce a calf with much higher value than a straight Holstein.

“Anywhere from $60 to $100 [per head] is what a dairy calf is worth,” Dorn says. “These [F1] calves are worth $200 and I’m hearing as high as $285 for a day-old calf.” And some dairies are retaining ownership in the crossbred calves to realize the full value of the beef-on-dairy cross.

Unlike a straight Holstein calf that will be on feed for a year or more, the beef-on-dairy crosses can be handled more like a beef steer. After a stay at a calf ranch, “We’re growing a lot of these composites in a typical grow yard program,” Jones says, and the cattle are going on feed around 800 pounds.

What’s more, the beef-on-dairy crosses are available 52 weeks a year, Dorn points out. That takes away the seasonality with spring and fall weaning.

As the beef-on-dairy trend has grown, some have wondered if the F1 crosses are putting more tonnage into the beef market. According to Jones, however, the opposite may happen. Those dairy steers are part of the fed beef marketing mix already. “We’re able to market these cattle [F1 crosses] at a lighter weight.”

Rather than pressure the entire beef market, Jones thinks the price pressure will be put on commodity cattle. The carcass quality is much better than that from a high-risk commodity steer.

“When we can make these cattle grade 91 percent Choice, we’ll grow that chain,” Jones says. “We’ll get more as we go forward out of these cattle. We’ve done it in straight beef cattle and we’ll do it in these as well.”

According to Dorn, “What we’re doing to the average beef producer is raising the quality bar they have to compete with. We think there’s opportunity to influence more than 5 million calves going into the beef supply chain.”

Jones agrees. “We’re growing. It really has the potential to be a branded product.”