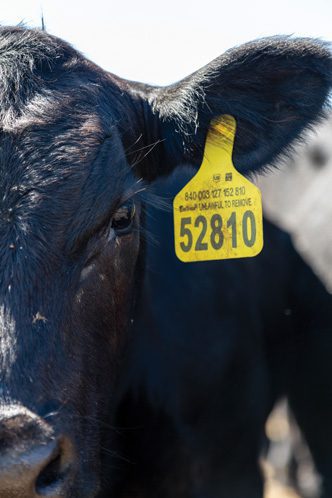 The state of Kansas, Kansas State University Beef Cattle Institute and the Kansas Livestock Association (KLA) have assumed the leadership position in animal traceability technology. The primary driver in the animal traceability program is, of course, foot and mouth disease (FMD) and the mayhem that would follow should an outbreak ever occur in the United States.

Started in early 2018, CattleTrace is an industry-driven pilot project for animal disease traceability. Funded through the State of Kansas, the USDA and private industry, there are currently 24 entities participating in the pilot program. They include seven livestock markets, 14 feedlots and three major packers – National Beef, Tyson and Cargill – at four locations.

CattleTrace is using ultra-high frequency (UHF) ear tag and reader technology, which enables groups of cattle to walk down an alleyway and have their tags recorded as they pass under a reader, without slowing traffic. Fort Supply Technologies and Micro Technologies are completing the equipment installations at participating facilities.

As program manager for CattleTrace, Cassie Kniebel says the program is simply a means of creating a timeline of where a given animal was located and who he had contact with. It will remain as hands-free as possible, using minimal data points (animal ID, time, location, date) to track and minimize damage in case of a serious disease outbreak. This is called an “end-to-end traceability system.”

Ideally, cattle will be tagged with the UHF eartags at weaning. The tags don’t look like their low-frequency counterparts; microchips are built into the face of the unit rather than the button. Kniebel admits that the tags can tear out, just like any other eartag. This is simply part of life on the farm; a certain percent will be lost. The tag that CattleTrace is using is the only USDA-approved UHF tag on the market, so it’s already gone through durability and retention studies. But cattle will always be cattle.

Tags covered with mud or ice are no problem for the readers. According to Kniebel, the UHF technology can even read through wood. Since this is a pilot project, Kniebel says they are working with their technology company providers to evaluate the system and improve efficiencies through the trial period.

Participation in the program costs $1 per head for cow-calf producers, which includes the tag. They simply need to tag their calves and continue business as usual. At this time, about 33,000 eartags have been distributed. The project goal is 55,000 through spring of 2020. Currently, mostly calves are being tagged and present a thorough picture of how cattle are moved through the production process, start to finish.

In order for a program like this to work, it has to be practical and doable for everyone along the line. Thus, there are people from all segments of the cattle industry on the CattleTrace industry advisory committee, including Kansas State University, Kansas Department of Agriculture, KLA and private industry. CattleTrace Inc. is overseen by a board of directors made up of industry stakeholders, including representatives from feedyards, cow-calf and seedstock operations, and livestock markets. The board makes decisions on specifics of the program, including data privacy and management, and the committee and Kniebel execute those directives.

Kniebel emphasizes the importance of data privacy at all industry segments. Knowing this is top of mind to producers, CattleTrace Inc. was set up as a private, not-for-profit entity to securely house the data for the pilot project. Memorandums of understanding are in place between CattleTrace Inc., the Kansas Department of Agriculture and Kansas State University for data management and project implementation. The Cattle Trace Board of Directors will determine who, when and how people get access to any records, and what criteria need to be met.

As the only traceability model already set up as a private entity, CattleTrace is ready to expand into a larger area. Calves are now moving through the system, and a cost-benefit economic analysis is being completed on the program at the industry and production segment levels.

CattleTrace is actively searching for additional producers in any state to join the pilot program and invest in moving the security of our nation’s cattle herd forward.

Brandon Depenbusch is a commercial cattle feeder whose company, Innovative Livestock Services Inc., owns eight feedyards – five in Kansas and three in Nebraska. He not only uses the CattleTrace system in his lots, but got involved at the ground level as the program was developing.

Why? First, he says, our industry desperately needs a traceability system. If there was ever an FMD outbreak, the U.S. government could intervene and force a government-developed system on producers. The cattle industry needs to develop their own system – one that works – instead of having to use a system developed by non-ag entities.

Second, the United States is one of only two major beef cattle exporting countries that don’t have a traceability program in place. This is already complicating trade with foreign countries; someday, it may be a crucial point in trade negotiations. Producers are potentially harming themselves by not implementing a traceability system.

Depenbusch says that, according to the World Perspectives Inc. report, approximately two-thirds of the U.S. cattle population needs to become traceable in order for the system to be considered nationally significant. Perfection (100 percent) isn’t the goal. The export market is hanging in the balance. He also emphasizes that data is not shared between producers (cow-calf producers and feedyards, for example). Data privacy is the most important consideration in the development of this traceability system.

Depenbusch encourages the industry to stop and think about ways UHF technology can benefit cattle operations. For example, adding the tag readers and information into an animal health database, building health history on individuals or groups, and passing histories along from backgrounding yards to the feedyard.

There‘s plenty to consider as technology develops. It’s a job in itself not to get left behind.