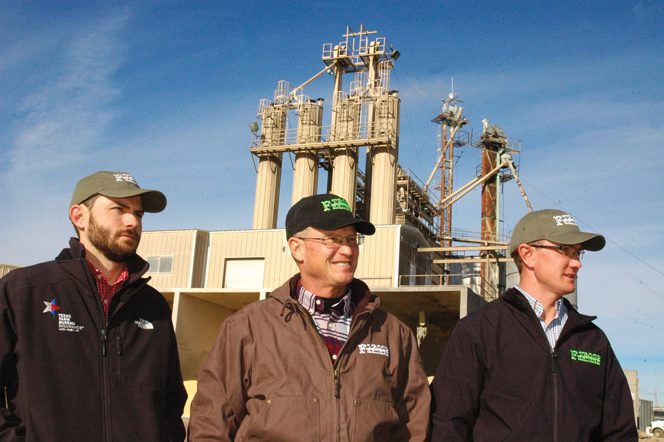 It takes a family.

Jim Friemel and his wife, Melanie, have had that philosophy their whole married life. Jim was raised on a farm and Melanie on a ranch. They knew the importance of everyone doing their chores. When it got down to buying a feedyard, it took them and their kids to make it work.

They own and operate F-Troop Feeders southeast of Hereford, Texas. Sons Laramy and Landon are heavily involved in keeping the yard going. Daughters Cydney of Florida and Max of Minnesota both feed cattle there.

“We bought the feedyard in 2008,” Jim says. “It had been the old Deaf Smith County Feedyard owned by Bartlett Cattle Co. I was with Dawn Cattle Feeders nearby when the partners bought the yard from Bartlett to make room for more cattle. Then the recession and tough times hit the cattle industry. That’s when my family took a chance and decided to purchase the yard ourselves.”

It took some convincing at a small Lubbock bank to get financing before the deal was done. Bartlett had refurbished the mill a few years earlier, but the feedyard office was a mess. It became a family project to rebuild the office, run new electrical, phone and computer wiring and get the place in order.

“We all helped make this a good place to do business, something we could be proud of,” Jim says.

Jim handles the majority of the cattle procurement, marketing and general feedyard operations. Melanie keeps the books and helps with marketing decisions. Laramy runs the family farming operation, which supplies much of the roughage for the feedyard rations.

Landon is a millwright whose fabrication skills help keep the feed mill running efficiently. He also keeps the farm’s tractors, implements and harvest equipment operational and adds his touches to expand equipment capabilities. Landon is also on the local Farm Bureau Board and is a volunteer firefighter.

“We work closely together. Dad runs the feedyard, Laramy runs the farm, I keep them both going, and mom pays the bills,” Landon quips.

The feedyard can hold 45,000 head, but the Friemels like to keep numbers at about 22,000. “That’s about what we averaged in 2018,” Jim says, adding that the types of cattle are typical for cattle fed at other Panhandle yards.

“We get cattle from all over Texas, Oklahoma, New Mexico, Arkansas, Alabama and other states,” he explains.

“We also handle a lot of Mexican cattle, and they seem to handle the feeding process about as well as a lot of preconditioned cattle we feed. We both background and fatten cattle. We’ve had cows on feed during drought periods, but we don’t like that situation if calves are born in confinement.”

About two-thirds of the cattle are custom fed, with the remaining one-third being family owned, either from calves out of their 180-cow commercial Angus operation or stockers purchased for wheat pasture grazing. Cattle are placed at everywhere from 300-800 pounds or heavier.

“We don’t mind feeding those lightweights for a year if needed,” Jim says.

Animal health is always a concern for backgrounded and fed cattle. The Friemels faced a situation in 2018 that caused them to take a different treatment track. “We saw an increase in respiratory disease and deaths,” Jim says. “That was even seen in good, preconditioned calves we placed that had been on a solid modified-live vaccine and weaning program.

“Our home-grown calves even had problems. They had been on a typical MLV program, but we still had to doctor them while on wheat pasture.”

“The killed vaccine stopped it,” Jim says. “I haven’t doctored one of our home-grown animals since. I didn’t think I would ever use a killed vaccine again, but it worked. I’m not saying that’s the whole answer, and it’s still a hypothesis. We’ll be looking to try it again this year.”

“We grow about half of our silage or wheatlage needs,” Laramy says, adding that corn gluten is used to add protein and help dry down the silage-based ration.”

Cattle are fed twice a day, except when they’re transitioning from a grow to a finish ration, when they’re fed three times a day. Jim says he prefers not to use a beta-agonist and let the cattle perform on their own.

“They see good ADGs and good conversion rates,” he says. “We keep cost of gain as low as possible. By being able to supply some feedstuffs from our farm, we can reduce some input costs.

“Most cattle are marketed through forward contracting with packers. That’s our best risk management tool. We also use put options to help secure a floor if the opportunities are there.”

What’s in a name?

The F-Troop name probably sounds familiar to Baby Boomers. The Friemel family farm where Jim grew up near Hereford was typical of other places that raised crops and cattle. There was a barn and chicken house. One year when the chicken house was idle, Jim made it his “fort.” And he hung a sign concocted after his favorite TV show – F-Troop.

The show’s stars, Cpl. Agarn (played by comedian Larry Storch) and Sgt. O’Rourke (character actor Forrest Tucker), were always in a fix with their captain or the local Indian tribe. They certainly didn’t think their stint at “Fort Courage” would lead to a 45,000-head custom feedyard named after their 1960s comedy series.

“My dad thought F-Troop stood for Friemel Troop. But we loved that TV show,” Jim says. “We remembered that name and used it for our cattle company. When we bought the feedyard, we brought the name with us.”

It assuredly takes a sense of humor to maintain a successful family-owned, small feedyard and compete with larger corporate yards. “One of the biggest pros of running a small yard is that the customer is not a number, he is a name,” Jim says. “Cattle may get a little more individual care. I have so much skin in the game with my own cattle that I try to feed and market customer cattle just like mine.

“It’s not always fun when things don’t go well with cattle performance and prices. Customers are not always happy with the results. But there are good stories and bad stories in running a feedyard of any size.”

As F-Troop Feeders moves along, there will be a need for refurbished bunks and other features. Be guaranteed it will be a family project to fix whatever needs upgrading.

And like Fort Courage, where TV’s F-Troop “kept the peace,” the Friemel feedyard will be a fortress for the family’s collected efforts to produce results at the feed bunk and farm, and maintain a successful family business with some laughs thrown in.