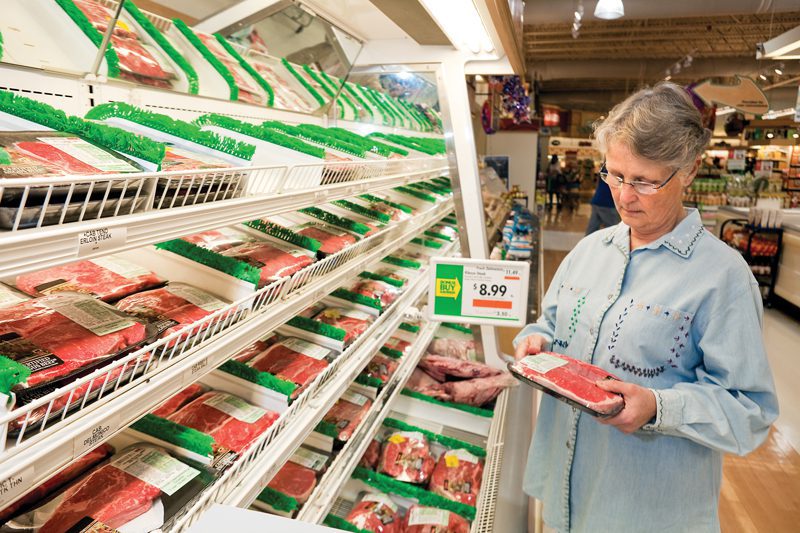 Domestic consumer beef demand last year was the highest in three decades, pandemic and all, based on the Annual U.S. Consumer Beef Demand Index.

Understanding why is complex, but there’s no secret beef demand grew in recent years as cattle producers churned out more fed cattle of higher carcass quality, which is tethered to a reliable eating experience, including taste and flavor. 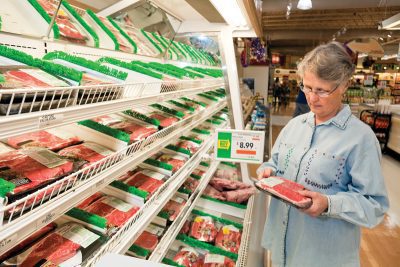 Prime and Choice beef production increased from approximately 11 to 12 billion pounds in the early 2000s to around 18 billion pounds last year, according to Randy Blach, CattleFax CEO, during this year’s International Livestock Forum hosted by Colorado State University and the National Western Stock Show

Along the way, the Choice-Select price spread maintained its strong pace, while the spread between Choice and the upper two-thirds of Choice grew. The Prime-Choice spread wilted because of the dearth of restaurant business.

“We produce more high-quality beef and consumers continue to say they want more,” Blach said. Since 2000, he noted that beef gained 7 percent share of total meat spending away from pork and poultry.

Keep in mind cost, convenience and safety always underlie the price of admission to consumer pocketbooks.

Figuring out why different generations of consumer segments choose different protein products, brands and purveyors is only slightly more difficult than hog-tying a one-legged flea.

Consider how differently you view the world and make decisions compared to generations older or younger than you. For marketers, for decades, that meant understanding the Baby Boomer generation (born 1946 to 1964), which continues to wield such extraordinary economic clout. But that’s shifting.

Baby Boomers still represent the greatest dollar share of spending for meat and poultry at about 35 percent, with estimated growth potential of 4 percent, according to Michael Uetz, a founding partner of Midan Marketing, LLC. Conversely, he explains Millennials (born 1981 to ~1996) represent approximately 23 percent of the dollar share for meat and poultry currently, with estimated growth of 51 percent over the next 20 years. Generation Z (born 1997 to ~2015) will be the next market disruptor after the Millennials and is just beginning its spending years.

Midan Marketing works with meat companies to help them understand consumer dynamics and how to market their products to them. Uetz shared insights during a webinar hosted by the National Institute for Animal Agriculture (NIAA) last year.

“Each generation responds to the marketplace differently based on their attitudes, their perceptions, the way they were raised,” Uetz said. “We need to understand the basics of what drives each generation.”

For instance, Uetz pointed out Millennials are the first digital natives, growing up with smart phones and the internet. They’re from the age where technology changed globalization. Many also grew up during the Great Recession.

“For them, it’s about access, not ownership,” Uetz explained. That generation tended to be more reluctant to make large investments in cars and homes. They were more content to rent, be it a lease or spawning shared services like Uber.

Millennials tend to be high consumers of protein, including meat, but they like variety and alternatives.

As for Generation Z, Uetz noted they will be the most ethnically diverse generation in history. They’re socially connected, too, spending about 10 hours per day online. Their attention span is about 8 seconds; they crave constant stimulation.

“We’re finding out Generation Z gets online and needs a lot of information before making a purchase, but they also like the experience of shopping in brick and mortar stores,” according to Uetz. “Think about all of the things they have in their thought process, in their purchase decision plan that they’re going to consider when they buy products, meat in particular.”

For Millennials, and it appears for Generation Z, Uetz says transparency, viewed as similar to trust, is becoming an increasingly important driver of purchase decisions.

“Consumers are much more aware and intentional than they were even 10 years ago,” Uetz explained. “Consumers have lots of opportunities to find products and review products. They can access and demand more information on just about anything.”

He noted 86 percent of Millennial moms, representing about $200 billion in spending power, say they would spend more money for a product with full transparency. That’s why you’ve seen the push by food companies and purveyors to document and verify how the product was produced, where it came from and all of the rest.

Health and wellness expectations serve as another example of generational market shifting.

Uetz terms the 1980s through the early 2000s the period of Healthy 101. For consumers, he explains diet choices were about weight management – what was not in foods, such as fat and calories.

Next came Healthy 201, from about 2004 to current times, when consumers were driven more about feeling good about the food they ate. Millennials drove the market to labels and distinctions like organic, local, fresh and sustainably raised.

“Now, we’re looking at two platforms,” according to Uetz. “We’ve got Healthy 3.0, which is about functional food. It’s more about performance and positive nutrition; it’s really about what a food can do for me. … Functionally, does it supply me with protein, does it support my health, does it provide energy?”

The other platform Uetz mentioned, Healthy 4.0, revolves around nutrition tailored to the unique individual.

“Our message must be clearly focused,” explained Jack Britt, a longtime meat industry consultant and strategist, during the same NIAA webinar series. “Rather than talk about milk and eggs or beef and pork, we need to talk about nutrients. We need to be talking about complete proteins.

Uetz agrees. “Animal products contain essential and complex proteins and micronutrients that you cannot find in any plant products, fortified products or vitamin supplements,” he said. “Yet, as a meat industry, we have never done a good job of making the claim to any of those.”

The growing list of fake meat products, be they plant based or ultimately cultured (cell-based, lab-grown) meat, increases the urgency to take ownership.

In recent survey-based research funded by the Beef Checkoff, given a choice between selecting beef or a plant-based alternative, approximately 25 percent would choose the latter. However, authors of the report, The Impacts of New Plant-Based Protein Alternatives on U.S. Beef Demand, say that comes with some caveats.

“Nonetheless, the fact that roughly a quarter of consumers indicate they’d choose a plant-based alternative suggests there is ample room for this market to grow, relative to its current position of under 1 percent market share,” they say. “Stated differently, our estimates suggest we will likely continue to witness significant growth in the plant-based alternative market, even if all that changes is increased availability; and prices remain fixed at the status quo, and consumer preferences and beliefs remain unchanged.”

Then, there’s cultured meat. Although the road to regulatory approval appears lengthy, depending on the country, advancements in technology are making the products more affordable. In fact, Eat Just, Inc., gained regulatory approval from Singapore’s government late last year for a cultured chicken nugget entrée. It’s available in restaurants there.

Eat Just first developed a plant-based egg product. It shifted its focus to cultured meat in 2017. You can find a fascinating video online from Bloomberg.com, “No Animals were Harmed in the Making of this Meat Video,” which tracks current cultured meat progress. It offers a taste of what the meat industry faces in terms of perception by some consumers.

“From a morality perspective, why do we need to cause harm to any other living thing to have dinner that tastes good?” Josh Tetrick, Eat Just CEO, asks in the video.

Between economies of scale, decreased input costs and technology advances, Tetrick expects the cost of cultured meat products to be less than conventional animal products within 15 years. “That will be one of the main inflection points that will lead to a new way of eating meat,” he says.

According to Uetz, 40 percent of consumers say they would try cultured meat.

“The question is whether consumers are going to be able to get over the process used, compared to regular meat products,” Uetz said. “I believe there is going to be room in the marketplace for all of us, especially when we think about the fact that we’re going to be feeding a world of 10 billion people.”