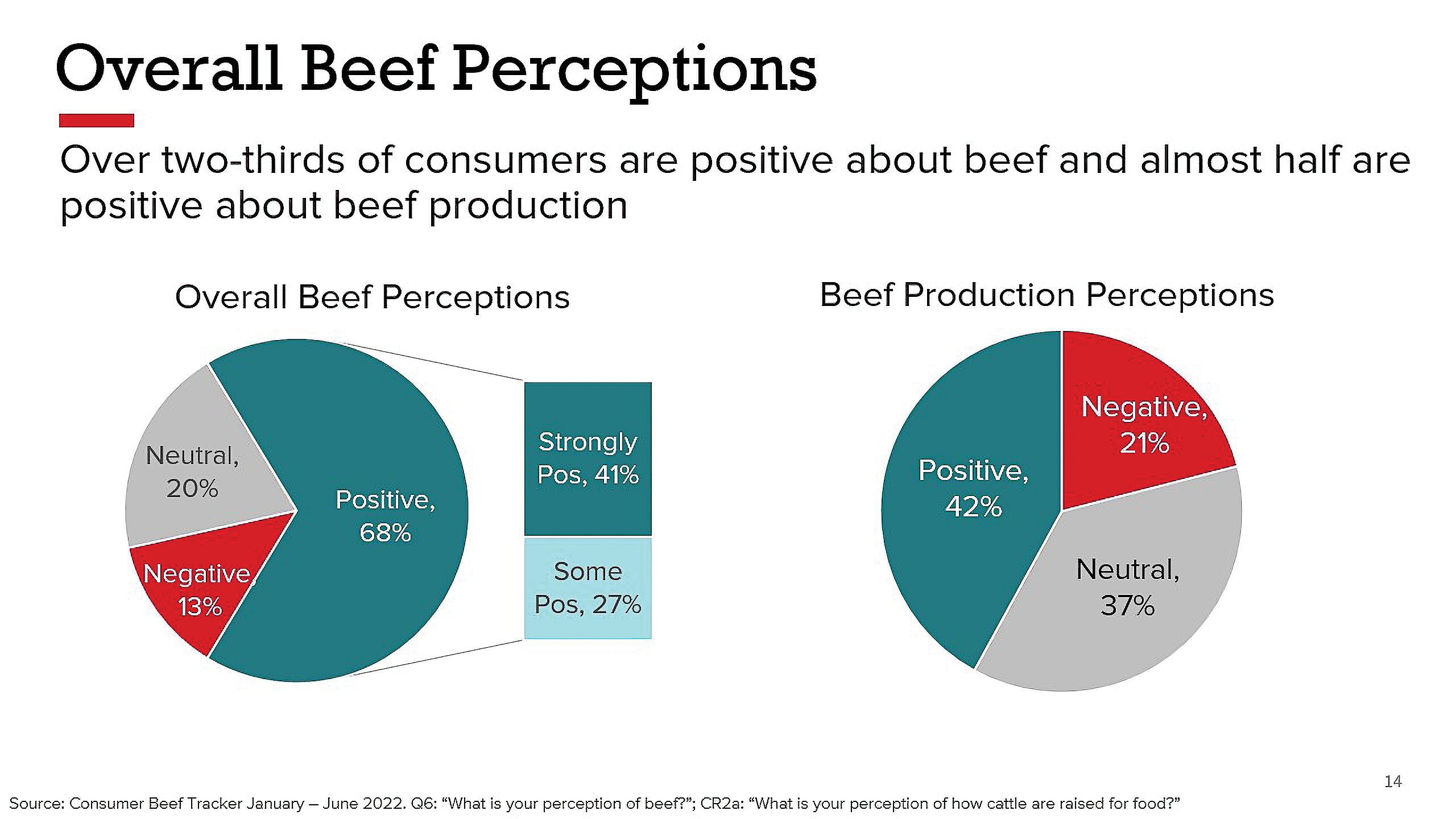 Then there’s some not-so-great news. Survey results as of early November show that overall purchase behavior is pretty flat, he says. “Based on the survey results, 69 percent said they consume beef on a weekly or more basis.”

That lags chicken at 81 percent but is ahead of pork and fish, which both register in the mid-forties, he says.

“If you start to drill down a little bit, we do see evidence in the data that consumers are either trading down or trading out of beef a little bit,” he says. “Maybe they’re buying less expensive cuts than they normally would – fewer purchases of steak, for example. Demand for ground beef seems to have gone up.”

Beyond that, Simone says there is evidence that people are stocking up on beef and stretching their beef dollar. Consumers are putting beef in the freezer and looking for ways to extend leftovers by recipe searches. “So they’re not giving up entirely, but they are getting creative in how they’re making use of those beef purchasing dollars.”

That’s likely because of rising inflation and the higher retail price for beef. But overall, demand remains generally steady, “but [consumers] may be stretching those dollars.”

There are several reasons that beef remains a favorite with consumers. According to Simone, there are five main demand drivers for beef – eating experience; convenience and versatility; price; how animals are raised and grown; and beef’s nutritional aspect.

For many consumers, beef checks most of those boxes. “For the nutritional aspect, there’s a value component to that,” he says. “Price is important, but a lot of people have an intrinsic value to the nutritional part, that beef offers a healthy, lean protein and is good for kids as well,” he says.

“But I think by far it’s eating experience. It’s taste. That’s the No. 1 driver. And then it’s the versatility that you can do so many things with it.” That’s where the surging demand for ground beef weighs in.

The data also shows a long-standing advantage that beef has over other proteins – consumers trust beef producers. “It’s almost double for beef as it is for chicken, about 58 percent vs. 34 percent for chicken,” he says. “Consumers say they consider that when they make a purchase, how animals are raised.”

However, it’s down the list of demand drivers. “Only about half of consumers say they have a concern with cattle production,” Simone says. “And of those that do, by far it is animal welfare. They’re not thinking greenhouse gas emissions or the environment. That does pop up, but it’s single-digit percentages.”

For consumers who have animal welfare concerns, it’s mainly that the animals are well cared for and have plenty of space. “As long as they’re reassured, and they want to be reassured by the experts, whether it’s cattle ranchers or veterinarians, not necessarily the media,” he says. “They don’t want the media telling them because they don’t necessarily believe it. But they do trust ranchers and veterinarians and others who are the experts in that regard.”

Keeping that trust among consumers is paramount. “And that’s why we spend so much time on [Beef Quality Assurance] training and certification, to make sure we drive that message home,” he says. “And even those who may have a slightly negative perception of beef production, once you provide that education, they tend to come over to the other side and realize how good a job the industry is doing in that regard.”

What About Fake Meat?

When the recent round of plant-based fake meat came to the fore, it was considered a distorter by both sides of the equation – investors on one side and beef producers on the other. Consumers, however, didn’t take the bait to any extent.

That’s not to say that consumers have turned away completely, but demand for fake beef is tailing off. “Through the first six months of 2022, it’s around 29 percent who say they eat the products weekly or more,” Simone says.

However, these consumers are not consuming fake meat exclusively. “They also consume beef, chicken, pork, fish in similar levels to other consumers who don’t consume alternatives at the same levels,” he says. “It’s part of their diet, but it’s not exclusive for most people.” 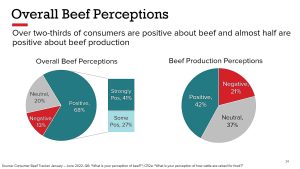 Drought-driven movement of calves from the pasture to the feedyard has kept bunk space generally well occupied. “So supply has been pretty strong and consumers have been able to take advantage of that,” Simone says. “But as we look forward, that’s going to swing back the other way and there’s going to be a dip in the fourth quarter and into the first half of 2023. So that is cause for concern,” at least from a beef supply perspective.

On the plus side, Simone says consumers are becoming more comfortable buying beef online from grocery stores, which really took off during COVID.

For 2022, online grocery buying is projected to be 10 to 11 percent of total grocery sales and could hit 20 percent within five years, Simone says. “And about 44 percent of consumers are purchasing beef when they order groceries online.”

Initially, some consumers were reluctant to buy online because they were concerned about freshness, quality, not knowing expiration dates, or being able to see either a representative image or the actual cut they were purchasing. “Now, with many grocery stores and food shopping services, you can actually see the piece that you’re buying in a picture on the app if you are using a personal shopper service [e.g., Instacart Shoppers].

“Once consumers become more comfortable with that process and have a good experience purchasing beef online [and the quality is good and cuts are just what they ordered], satisfaction levels are 75 percent to 85 percent with online purchases of beef,” he says, which is likely contributing to additional future purchases and the incremental business we are seeing in the data.

Over the last few years, through all the uncertainty and turmoil, consumers have shown their continuing desire for beef. “Consumers, they love their beef. They’re not going to stop buying it, but the bar’s pretty high,” Simone says.

“There are high expectations and we can’t take our eyes off the ball. So we need to continue to deliver that high-quality product that consumers love and enjoy so much,” he emphasizes. “Nothing else replaces it – the taste, the smells, the versatility of that product.”

Consumers can only do so much with chicken, and they know that. “They’re going to stick with the beef producer, and producers have got to tell consumers that we’ve got their backs and we’re trying to support that beef demand,” Simone says. “Consumers have stuck with us and, at this point, they’re not going anywhere. They’re still willing to pay for a high-quality product.”