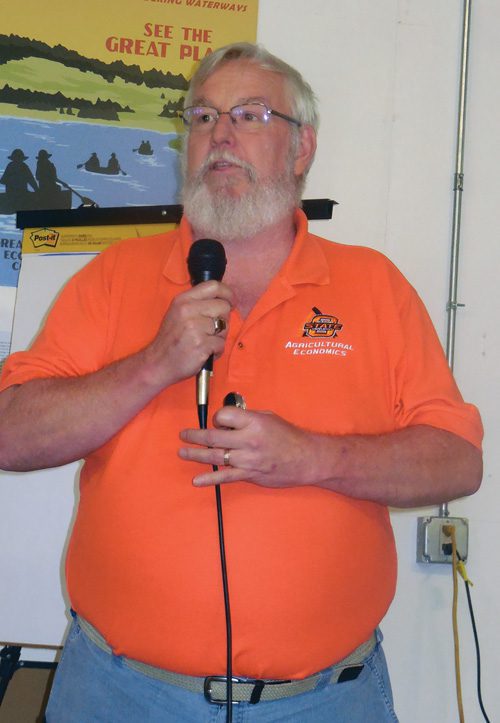 Derrell Peel, Ph.D., has no pretentious ideas about his job; although he holds a doctorate in agricultural economics, he still finds it difficult to wrap his head around the enormity of the global cattle industry. 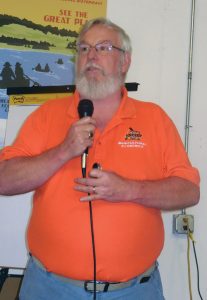 Peel is a Breedlove professor of agri business and Extension livestock marketing specialist at Oklahoma State University (OSU). He grew up on a Montana ranch and headed to Montana State University for his bachelor’s and master’s degrees, then earned his Ph.D., at the University of Illinois in 1989. He went directly to his long-term employment at OSU. Along the way, Peel married and raised a family of three children with Pat, his wife of 39 years. They currently enjoy the company of a grandson.

The marketer’s job has taken him around the globe, educating people across the United States and at least eight other countries. He is particularly fond of Mexico, where he’s spent significant time over the course of 26 years, and where he and his family once lived for a year.

Peel says his success is a function of “getting around.” Travels enable him to better understand the global cattle industry, its intricacies and workings.

Peel’s ranch raising put agriculture in his blood; a love for cattle fueled a practical interest in market strategy. It seems his other love is one that would put many other folks into a dreary daze – Peel loves math and statistics. Not, he warns, for their own sake, but for “what math allows me to do.”

Very comfortable with numbers, he is able to conjure up acres of useful information, then help the rest of us digest it in a classroom. When teaching, he tries to “understand his audience,” venue to venue. It is difficult to comprehend an individual’s role in a given setting. He speaks so people can take his message and sort out what they need. “Take it home and use it tomorrow,” Peel says.

Peel first explains that the beef cattle business does not operate on a simple supply-and-demand model. The industry’s structure is complex because of multiple parts, wide variation in feedstuffs, climates, breeds of cattle and methods in which they are raised. Agriculture, so closely tied to climate, presents us with an infinite variety of scenarios across the world. In addition, cattle-raising is a slow biological process, with cows raising one calf at a time, perhaps even one every two years, in some parts of the world.

The multi-stage-producer process further makes the business resemble a big funnel, with calves first being gathered by stocker and backgrounding operations before reaching feedlots on their long path to the packing house. The variety of ways that cattle wind their way through these processes is nearly limitless.

Imagine the flexibility of economics in least-cost rations as cattle make their way through various stages of growth. Peel has seen cattle grazing on many species of grasses, crop residues and at bunks filled with alternate feedstuffs. Vegetable peelings are commonly used in West Coast bunks, and cattle located near industrial areas may be observed with fines and crumbles coming out of candy factories. It is simply difficult to comprehend how wide the industry operates.

Getting down to thoughts that U.S. cattlemen ponder every day, supply and demand is still the gold standard for price discovery in any market, imperfect as it sometimes becomes (think about our trade war with China).

When asked about cow numbers being considered in “expansion phase” by many economists, Peel explains that this is not the simple black-and-white numbers game that puts figures on a page.

Expansion itself has leveled off in the past couple of years. Some factors affecting our cow inventory are very regional and long term. They are often brought about by outside influences. For example the corn market shot to $8 per bushel a few years ago, causing a shift of cow numbers out of the Midwest as farmers dispersed their herds and tore out grass in favor of row crops. He further says much of the expansion since 2014 is simple recovery from the severe drought in Oklahoma and Texas, where two million head of cows were lost in the 2011-2013 disaster. These events shed new light on cattle numbers and what they might mean.

Stocker operations vary as greatly as cow-calf producers in operational skills marketing abilities. Peel has observed smaller units of several hundred grass yearlings to a few producers who may run up to 20,000 head.

He explains that many stocker folks sell their yearlings when their forage base is used up. Additional financial and managerial problems cause some producers to call the truckers. On the flip side, large operations may be more likely to employ market risk management, such as video auction (direct contract forward) or futures and options contracts.

Above all, heavier cattle are more exposed to risk due to time factors. Producers’ cost of production (COP) has been committed wholly by then, putting limits on managerial options. This is one area in which yearling or stock operators have a boots-on-the-ground edge over cow folks or feedlots. This group of cattle may be manipulated in weight gain, giving marketing flexibility unavailable to other sectors of the industry. Feedstuffs, markets and facility use can all be handled more efficiently in backgrounding lots. Cattle may be targeted to specifics not available in other settings.

Peel said that cow-calf and yearling producers are less likely to use risk management tools than feedlots, who may even have trouble getting financed unless they are covered on the Board of Trade.

USDA’s Livestock Risk Protection (LRP) programs are available but seldom used by beef cattle producers. They are more likely to sign up for disaster payments when necessary rather than use other government programs.

A Rock in the pond

The fire that damaged the Holcomb, Kan., Tyson plant Aug. 4., is a sore subject for cattle producers. Peel describes the plant closing as a shock to the market with a huge initial reaction. The futures market, in particular, overreacted. He compares it to throwing a big rock in a pond. After the subsequent splash, ripples spread through the water, then eventually subside. It is important to remember that markets themselves play a role in getting things back into balance after events like the Tyson fire.

Although there is a lot we do not know yet, this is no time to panic as the market rebalances. Peel says that although harvest capacity was already tight, some cattle will no doubt be absorbed by other plants. We must understand the complications this will cause with issues such as labor agreements. Market relief will not be instantaneous, and cattle are a perishable product.

Branded beef as a marketing tool

Peel explains that the complexity of our industry has resulted in a very slow movement to differentiated markets (branded product) as compared to pork and chicken. Much of the pork and chicken in our country is owned by a parent company from birth through meat case, simplifying marketing strategy.

Most beef is still sold in the meat case under USDA generic labels rather than under a brand name. However, he believes there is a tremendous opportunity to add value to beef from the meat case clear down to the producer level.

Although there are still many challenges to overcome, several breed associations have had an impact down to the cow-calf level, with Certified Angus Beef® being the leader in that regard. Brands such as Cargill’s Sterling Silver® and others do not reach back to the cow man, but are able to create added value at the intermediate level, such as feedlots or even backgrounding operations. Peel predicts additional use of differentiated product as time passes, developing slowly.

How big can these cattle get?

An issue that’s top of mind for many – and is multifaceted in nature – is, “How big can they make these cattle?” Peel seems stumped at the question, admitting it’s an interesting topic that defies an explanation. Biological limits are yet unknown. Genetics, betaagonists, implants and ionophores are pushing the potential of weights even higher.

As an economist, Peel is interested instead in the product we are offering the consumer. He reminds us that any given carcass is broken into hundreds of products. Retailers are capable of taking hundreds and turning them into thousands. Issues with product size is limited to specific cuts of meat, but retailers seem to be handling this problem for now at the meat counter. One thing is certain, any cut of meat may be ground and will make a conveniently prepared product.

“As a beef industry, we are part of an enormously complex system,” Peel concludes. We need to understand our role in it and how to respond to markets.

“My hat is off to cattle producers. They do a great job figuring it out and producing beef efficiently. It is a great testament to producer individuals that we always have fresh meat available.”