In the heart of what was once a national park sits a 100-year-old family farm and feedyard in Garden City, Kan. Now called Reeve Cattle Co., the operation is a bustling hive of energy and innovation, always willing to go the next step in improving the agriculture industry. From serving on boards to testing new technologies, Lee Reeve, et al., is committed to the future. 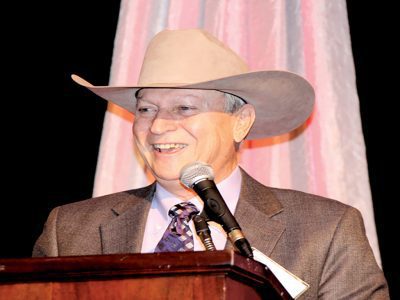 When the National Park Service decided they had enough parks across the United States and gave land back to the public, they opened the area around Garden City for homesteading. The land was originally divided into smaller properties, but over time and The Great Depression, many families were forced to sell and start life elsewhere. The Reeve family took a chance and decided to buy some of the land from their neighbors, establishing a cattle ranch that is now a farm and feedyard operation.

The Reeve family ranch started as an Angus operation back before Angus were “cool.” Calves were shipped to the Corn Belt to be finished, with many ending up in Chicago’s kosher trade.

“In those days, Angus cattle weren’t what they are today. They were harder to manage and didn’t fare as well as other breeds in this part of the country,” Reeve says. Different breeds have different attributes that make them more suitable to certain climates. Through the years, the Angus breed has developed into a much hardier and friendlier animal than they once were.

During the 1950s, Reeve’s dad, M.P. “Jack” Reeve, acquired the family ranches from his father and uncle. It was a very exciting time for Kansas agriculture. Pivot irrigation had just been developed and was proving to be an essential asset for the future of cultivation. Over the course of the next 15 years, the ranchland was turned into pivot-irrigated farmland, and the operation constructed a feedyard. Feeding their crops to their cattle was one of the Reeves’ first steps in creating a sustainable operation.

In 1982, the family opened the doors to Reeve Agri Energy, an ethanol plant adjacent to the feedyard that’s been in operation ever since. Through the years, the ethanol plant has developed an output of 17 million gallons of ethanol.

The resulting wet distiller’s grain byproduct is incorporated into the ration for their 50,000-head yard, continuing the Reeves’ mission of running sustainable operations. They have remained a privately owned and operated company.

The Kansas Livestock Association is unique in that their elected president only serves a one-year term and the organization strives to elect leaders who represent each area of the state. It’s a fast-paced year of representing the association and members in many different scenarios. The KLA president and president-elect each assist during the year as needed.

Reeve is very passionate about actively supporting the state livestock association. “KLA membership is a multi-faceted group of individuals; they aren’t just cattle raisers,” he says. “We have many types of associated businesses involved in the organization.

“We aren’t competitors. We are a pool of knowledgeable individuals working to improve each other and our industry,” Reeve asserts. “The networking opportunity is really one of the best benefits of membership. We face many of the same issues and concerns, and by working together, we are able to discover tangible resolutions in many instances.”

Membership organizations like the Kansas Livestock Association really strive to react effectively to different situations like dealing with the state legislature. Lobbyists and legal council inform members of issues taking place at the state and national levels, explaining the benefits and possible unintended consequences. Members then decide which way they lean on the issue, agreeing on a resolution that directs the organization’s staff to lobby on the membership’s behalf. The yearly convention in Wichita is a melting pot of the Kansas agriculture industry coming together and working through issues they all face.

Recently, KLA collected donated funds to help relieve some of the financial pressures that fell on ranchers after the March 2017 wildfires. Those fires destroyed hundreds of thousands of acres of ranchland, but a network of passionate friends banded together to help with the relief efforts.

Situations like these really show the kindness and love that is still in this world. Reeve is very proud of KLA and their efforts to provide relief to the wildfire victims.

Parts of Kansas face a serious water concern as the Ogallala Aquifer water table continue to decline and, in some places, dry up completely. Because of its location, Reeve Cattle Co., must managing its water supply carefully and develop sustainable management practices to ensure water availability for generations to come. With the decline of the Ogallala Aquifer – once the largest aquifer in the world – it’s time to get serious about water conservation and new technology for crop irrigation.

Because of his passion for preserving water, Reeve has served as chairman of the KLA Water Council twice. “The most important change we can make is paying attention to what we have and educating others about it,” he says. “We run into serious issues when people who don’t understand our water usage and preservation methods try to regulate it.

“The answer is not in more laws or regulations; it’s in learning how to use what you have and creating efforts to recharge when possible. The goal is to be as sustainable as possible while also realizing that perfection is unattainable.

“For us, being right here in the Sandhills is a fine situation. The water, whether from irrigation or rain, runs right back down into our ground and helps to maintain the moisture profile,” Reeve explains. “We have also taken steps to improve our irrigation systems to use water as efficiently as possible.

“Technology and genetics are what’s going to save us. Right now, it takes 20 gallons of water to grow one ear of corn. We’ve got to do better. Drought-hardy crops preserve water, but we still need corn, too. Improvements will come from the elimination of evaporation during irrigation and controlling weeds that suck all of the moisture and nutrients from the soil.”

For Reeve, he really sees his contribution to the future of agriculture through paying attention to the opportunities as they present themselves and continuing to take measures to develop a sustainable operation for the next generation. “Agriculture is very unique, we all need it, and we always will,” he says. “It’s also a very interesting thing; [agriculture] is always changing, but it never changes. As we continue to develop technology we also see doors open and close. With the change comes opportunity.”

With the support of his wife, Brenda, their three grown children, extended family and amazing staff, Reeve is able to impact the industry of agriculture beyond today, improving it for the generations to come.

Hat’s off to you, Mr. President, and thank you for encouraging the rest of us to get up and get involved.