Price Margins Don’t Add Up in Favor of Producers 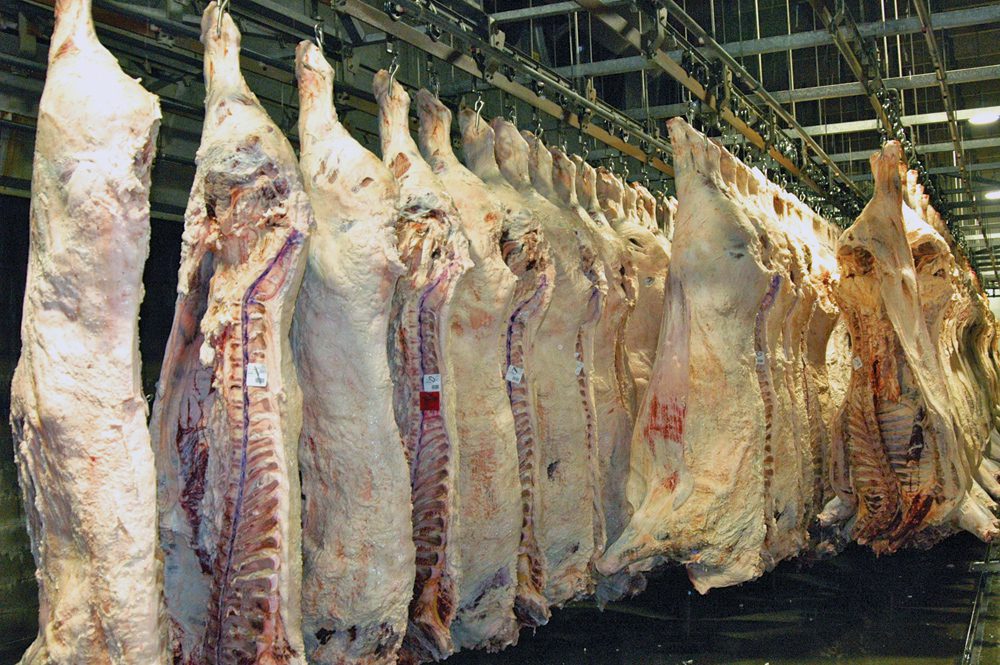 Overreacting During Market Turmoil Could Be Risky

“If you’re in the middle of a tornado, don’t remodel the kitchen.” 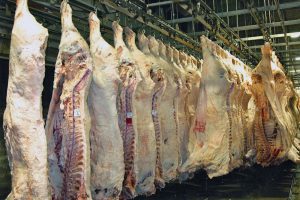 He is among those concerned about the major price disparity between packer returns and producer/feeder returns, or in better terms – losses. But Peel tells CALF News that mandatory negotiated cash trade won’t guarantee higher cattle prices for producers and feeders.

“Better price discovery won’t make better prices,” he says. “If you do a thorough mandate that imposes new transaction costs, there’s a good chance you will cause prices to go lower.”

He says the tsunami of market disruptions are partially to blame for price disparity, which has seen packers receive cutout prices that topped $300/cwt. or more, while fed-cattle prices struggled to hit below-breakeven $120/cwt. this spring and summer.

Disruptions have included the large beef cattle supply that grew several years following the herd liquidation caused by drought from 2011-2014. That’s when packer capacity was considered too high. Several major packing plants closed, which eventually created a shortage of capacity as cattle numbers increased. In August 2019, a fire temporarily closed a Tyson plant in Holcomb, Kan. Wholesale markets increased while fed cattle markets slipped. The beef industry called for the Department of Justice (DOJ) to look into price manipulation by packers.

That was all before COVID crippled fed markets even more, sending them below $100, while packers saw huge price increases in much of 2020. Furthermore, this year’s February deep freeze disrupted Midwest feedyards and packing operations. And JBS was recently hit with a huge cyberattack that forced temporary plant closures.

Calls for more government intervention into how packers buy cattle escalated. They came to a head in May when rival cattle and other producer groups came together to discuss possible solutions. National Cattlemen’s Beef Association (NCBA) and Farm Bureau, which think much alike, sat at the table with R-CALF and Farmer’s Union, which typically take different roads. The Livestock Marketing Association refereed, errr coordinated, the meeting in Phoenix.

The group agreed to talk to their respective organizations about expediting renewal of the U.S. Department of Agriculture’s (USDA) Livestock Mandatory Reporting, including formula-based prices subject to the same reporting requirements as negotiated cash and creation of a contract library. They demanded the DOJ issue a public investigation status report and conduct joint oversight with USDA over packer activity moving forward. They encouraged investment in and development of new and independent local and regional packers.

Beef state senators urged Attorney General Merrick Garland to have the DOJ move forward with its investigation into anti-competitive practices in the meatpacking industry.

“It’s in the best interest of both producers and consumers for the DOJ to get to the bottom of the current market dynamics and assess why they seemingly always result in producers getting the short end of the deal,” said Ethan Lane, NCBA vice president of government affairs.

In June, the Senate held a hearing on “Examining Markets, Transparency and Prices from Cattle Producer to Consumer.” Peel wasn’t there to testify, but he followed the discussion on how markets could be made fairer for producers and feeders.

“Fair doesn’t enter into economics,” Peel declares. “It’s a market system. You pay as little as possible for product and sell it for as much as you can on the outside. If there is a drought elsewhere and you have hay for sale, do you sell for less money than the market dictates? You’re usually not going to do that.”

“Fair is a policy question, and the policies being discussed are what worry me,” Peel says. “It’s not my job to set policy. It’s my job to tell the consequences. Make sure you have the information as to why we’re in this situation. Much of the policy stuff being discussed flies in the face of all of the research we have in how this industry works.

“Research shows that mandates are a bad idea. Concentrated markets don’t necessarily have anything to do with price discovery. Better price discovery won’t make better prices. If you do a thorough mandate that imposes new transaction costs, there’s a very good chance you will cause prices to go lower. That’s what research tells us.”

Glynn Tonsor, Kansas State University agricultural economist, was among those who testified at the Senate hearing on markets and transparency in June. Tight packer capacity and cattle marketing were discussed.

“Economists expect lower fed cattle prices and higher beef prices when a system is at or near operational capacity,” he said. “On balance, that is what we have observed in markets. Going forward it is generally expected fed cattle volumes will decline and some physical processing capacity may be added.”

He praised alternative marketing agreements (AMAs) or formula pricing, which have grown in use in recent decades. Tonsor said AMAs originated from the need to improve cost efficiencies such as coordinating logistics, and lowering marketing and procurement expenses. Consumer demand for higher quality beef elevated demand for specific cattle and further use of AMAs.

Mandated negotiated cash trade could reduce the value of AMAs to producers and feeders. Market channels for higher quality cattle “would be seriously constrained without this increased use of AMAs,” Tonsor said. “In short, increased use of AMAs reduces costs and enhances demand in some segments of the industry – both worthwhile outcomes that increase the economic pie for industry participants.

“AMAs present a multitude of well-documented economic benefits to the industry and society while, by definition, reducing the volume of traditional, spot-market negotiations that historically have been the base of valuing fed cattle. … Without contemporary use of AMAs, I believe cattle prices would be lower as production efforts would not align as well with consumer demands.

“I encourage the industry to proceed forward in a manner that does not deteriorate economic benefits of the industry’s evolution in recent decades to improve beef quality and align efforts with beef demand signals.”

David Anderson, Texas A&M University Extension economist, agrees that AMAs have reduced transaction costs between feeders and packers, and has helped both sides. “AMAs have value and reducing them will impose more costs, resulting in lower calf prices and higher retail beef prices,” he says.

“Value-based marketing in the industry was the effort to reward producers for improving quality by paying them for it, paying premiums for quality. Ranchers have changed the entire herd makeup by moving to improving quality over the last 40 years.

“Cattle producers have always opposed government intervention in their business, but the ongoing disparity in margins have understandably created a sentiment that a government mandate is needed to fix the market,” according to a statement to CALF News from leadership at Texas Cattle Feeders Association (TCFA),

“Unfortunately, a government-mandated business model dictated in law will not likely be revised or reversed in the future. A mandate will have many unintended consequences, such as increasing operating costs for the beef supply chain, which will make beef less competitive with other animal and alternative protein sources. Laws, regulations and industry marketing plans that minimize government interference, but provide antitrust oversight, are the preferred solution.”

TCFA prefers a volunteer negotiated cash trade plan set in January by NCBA (see “NCBA’s Voluntary Negotiated Cash Trade Plan,” CALF News June/July 2021). It calls for feeding regions to meet 75 percent of their so-called “robust” trade numbers. “TCFA members exceeded the goals based on university research in the second quarter (April-June) of the plan. We will continue to meet these goals,” TCFA says.

Peel sees a break in producer/feeder market conditions. “Again, large cattle numbers hit the market in early 2020. There was a supply bulge and capacity restraints,” he says. “But we’re working our way through it with lower fed cattle numbers. In about a month, the capacity issue will go away in the short term. We’re through the worst of this in terms of market conditions.”

The market was fractured in 2014 when cattle prices were high, Peel says, while today, the market is broken in a different way. “Overall, the market will fix these things,” he says. “But with all of the anger out there, we’re considering policy things that are pretty scary from my standpoint.

“We’re making long-term decisions on short term conditions. If you’re in the middle of a tornado, it’s not the time to remodel the kitchen.”

Is Packer Expansion the Answer?

Black swan markets caused by the Holcomb fire, COVID and other astonishing events provided packers the ability to manage harvest-ready cattle supplies and available plant capacity to gain leverage, which increased their profit margins, notes TCFA leadership. However, “market leverage has already begun to swing back in favor of ranchers and feeders. To help prevent this from happening again and to allow for rebuilding the cowherd in coming years, more packing capacity is needed.”

In July policy proposals by President Joe Biden and the U.S. Department of Agriculture, one aspect would provide $500 million to help build or expand smaller packing facilities. That’s a step toward increasing processing capacity. But how far would it go?

While testifying at the June Senate hearing on “Examining Markets, Transparency and Prices from Cattle Producer to Consumer,” Dustin Aherin, vice president of RaboResearch and animal protein analyst, said the recent disparity in margins suggests that there is opportunity to add packing capacity.

“However, that opportunity does not come without significant risk,” he testified. “First, the upfront cost of a new or expanded plant is extremely expensive. Industry sources estimate that a new plant costs from $100 million to $120 million for every 1,000 head of daily capacity. Then, a new endeavor must meet regulatory requirements, build a labor force and keep enough cash on hand to absorb losses. It’s not just about building facilities; it’s about building a business model.

“If all of the announced plans for plant construction and expansion come to fruition, roughly 8,000 head of daily fed cattle capacity and nearly 2,000 head of daily non-fed capacity could be added to the U.S. beef industry over the next five years,” Ahern added. “Recognizing current drought conditions, if the beef cow herd declines by 2 percent or less, there’s opportunity for about 5,000 head per day of profitable packing capacity expansion.”

He stated there’s a point where packer capacity expansion goes too far to withstand cyclical periods of tight cattle supplies. “The long-term cattle cycle, drought risks and market fundamentals must be considered,” Ahern testified. “Whether in new or existing plants, increased technology implementation will be a critical component of future success.”

Texas A&M’s David Anderson asserts that considerations for building or expanding packing plants can get side-tracked by many things that can sway cattle and wholesale beef markets.

“Profits should encourage or incentivize expansion in packing, but the cyclical nature of the industry and the dollar investment makes that picture cloudier,” he adds. “In the short term, I would argue that profits of ranchers or feeders don’t matter much to packers. However, in the long run, they matter a lot.

“Prices have to be high enough, or profitable enough, to keep ranchers and feeders producing cattle that will go to a plant. We also operate in a cyclical industry due to economics and biology, and some drought thrown in. The cyclical nature of cattle numbers changes capacity utilization and negotiating power from year to year.

“We have these mechanisms [judicial review] in place to investigate and to do something about it if it’s found,” he says. “Those are there to protect consumers and producers, and more efforts in that area are probably appropriate.”